BMW i8 review - interior and tech 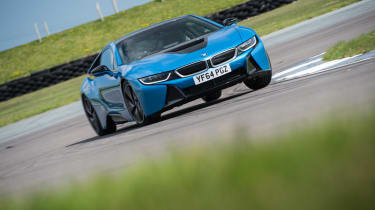 BMW likes to describe the i8’s interior as if it’s a Scandinavian’s living room. Interior options are described as ‘worlds’, which is clever marketing speak for ‘we’ve done something unusual’.

Dihedral doors kick off the i8's interior experience, with high sills from the carbon fibre reinforced plastic tub making ingress and egress a little difficult. A large transmission tunnel seperates driver and passenger, but strangely despite its size, there is very little cubby or storage space. Rear seats are usable although only for younger passengers.

One of the issues we've always had with the i8 relates to its start up sound. For some reason BMW opted to use a scratchy low-res sound sample when you hit the engine start button. As the car normally starts in pure electric mode, it's merely there to emphasise the fact that you've actually switched it on as the motor is so quiet. The problem is the low-res noise just breaks an otherwise premium experience.

The rest of the interior, although eco-friendly, doesn't do a huge deal to up the ante over say a top spec BMW 5-series. It just doesn't feel anywhere near as special as the car looks from the outside. The materials used also aren't as premium to the touch as the less environmentally sound stuff you would find in other top-spec German cars.

More reviews for i8 coupe

Then there is iDrive itself and the LED display behind the dash. Given the incredible work that Audi has done with the TT, it’s a little disappointing to see BMW hasn’t worked quite the same levels of magic with the dash and infotainment in a car already as special as the i8 – they work brilliantly, but they’re really no different to what you’d find in the rest of BMW’s range. 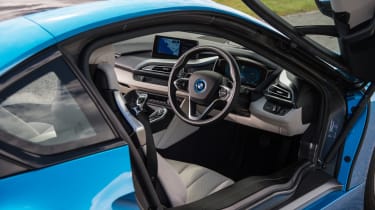 BMW more than makes up for this slightly uninventive use of iDrive with its implementation of apps and smartwatch control. Those who own an Apple Watch will find they can now control the i8 from their wrist. You can track the location of your car, see its eco stats, or lock and unlock it. It's also possible to flash the headlights to help you find it in a car park.

The iPhone takes this one step further, letting you compare your eco driving against other i8 owners. It also offers tips on driving style to help further increase the MPG on your car. All in all, it's a hugely impressive package that is the icing on the cake for a car that feels as cutting-edge as it gets.

The i8 seems to be the perfect platform for experimentation, however - the i Vision future interaction concept presented at the Consumer Electronics Show in January used the i8 platform to showcase autonomous driving capabilities, gesture control and cloud-based tech.

At the same event, BMW presented a mirrorless version, which replaced traditional rear-vision mirrors with cameras and screens. The aim is to eliminate blind spots - often a particular issue with sports cars like the i8 - and improve aerodynamic efficiency. With small cameras out on stalks rather than mirror units, BMW claims a three per cent improvement in aero efficiency.