It was with a heavy heart I watched as the tail-lights of my beloved '96 355 Spider disappeared up the drive, complete with its new owner. I'd read these pages with interest (and sometimes sympathy) as David Yu was hit by some pretty hefty bills on his 355, and was glad that I had managed to avoid the same punishment. Even so, after nearly 40,000 miles and three years of owning a classic Ferrari, the time had come for a change. 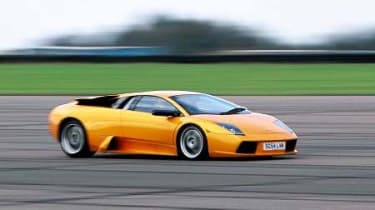 It was with a heavy heart I watched as the tail-lights of my beloved '96 355 Spider disappeared up the drive, complete with its new owner. I'd read these pages with interest (and sometimes sympathy) as David Yu was hit by some pretty hefty bills on his 355, and was glad that I had managed to avoid the same punishment. Even so, after nearly 40,000 miles and three years of owning a classic Ferrari, the time had come for a change. I've hankered after a Murciélago for some time, figuring the big Lambo is a real value-for-money supercar. A mid-mounted V12, fabulous lines and genuine membership of the select 200mph club - supercars with credentials like these routinely cost twice as much, and none of them can offer such solid residuals or Audi-backed reliability. The story began in April when I put a call in to Steve Higgins, sales manager at Lamborghini in London. He invited me down to the showroom for a chat, and threw in a visit to the service centre at North Acton to view the Murciélago at close quarters. It quickly became apparent that a new Murci, at £168,000 list, made more sense than a used model, as the difference between new and used was still very small. The scene was set, and in May I signed an order for a Murciélago in pearlescent orange (£1200 extra), with dual-tone leather (£800) and a Navtrak (£1275). I justified it to myself with the promise that I was going to really use this car, that it was not destined to be a fair-weather garage queen. All I had to do now was hang on until September, but the long and painful wait was broken by two superb events arranged by Lamborghini London. The first was a dream trip to Italy to see Gallardos and Murciélagos being assembled, and the second was a fantastic day of back-to-back test drives of both models at Millbrook. Appetite duly whetted. Next up was the small matter of insurance. I shopped around (well, you would, wouldn't you?) and settled on a quote from Richard Nowell of Nowell & Richards (01785 255514), the best cover I could find. The cost is £2600 (age 36, full NCB, six points speeding and a mandatory Navtrak). The day my wait ended was bright and sunny, which was just as well since I did not relish driving the Murciélago home in the wet, despite its 4wd. After an efficient handover by Darren Pearce at the newly opened Lamborghini Manchester, I eased the short, wide nose out of the showroom - and promptly stalled it twice. With 580bhp to contend with, the triplate clutch is hydraulically assisted, hence the light feel. This makes the Murci deceptively easy to drive, but often dIfficult to drive smoothly. Joining the M60, I cruised along at 60 and soon discovered what tremendous road presence the Murciélago has. I was busy fiddling with the controls, and wondering why I hadn't been overtaken for some time, when I glanced in the huge mirrors and saw traffic backed up for half a mile or more. Nobody wanted to overtake. A few weeks on and the Murci and I are getting well acquainted. Third and fourth gears give savage acceleration and, because of the V12's huge torque, are able to cope with most day-to-day driving. You soon get used to less cog-swapping, but getting used to the car's massive 2m width takes a bit longer. Unlike the 355, the Lambo doesn't shrink around you, and kerbing the rims when parking is a constant hazard. Rear visibility is non-existent, and it was not long before I introduced the alloys to the concrete. I had them repaired in a couple of days, and then proceeded to do exactly the same thing a week later. Doh! There's a lot to have fun with and a lot to feel good about in life with the Murci. The air scoops that rise automatically out of the bodywork can also be operated manually at low speed, which is amusing in traffic jams, while on the feelgood side the fit and finish are impeccable and the Schedoni leather seats are comfy and supportive. In late September I got an invitation to a hillclimb at Harewood near Leeds, and I couldn't resist it. The instructor spent half an hour demonstrating the racing lines in a Mini Cooper, and then eyed the huge rump of the Lambo. He told me to forget the lines he'd just shown me - no point, since the Murci took up the whole track! Over the next couple of hours we hammered around the track at intervals, and after about four circuits the brakes began to rumble, then gradually fade. At 1650kg the Murcielago is not light, despite its carbonfibre bodywork. The Gallardo, interestingly, has slightly bigger discs to complement its 19in rims, whereas its bigger brother on 18in rims has to make do with smaller discs. The 2005 Murci needs the bigger gear. The only other issue was the premature failure of the lifting mechanism that raises the front spoiler to avoid speed bumps. A phone call to Lamborghini Manchester was all it took - they loaned me an Audi TT (sadly not a Gallardo) and replaced a faulty pressure switch under warranty. Regrets? Nope. The Murciélago is a supercar with an astonishing breadth of ability. It's reduced me to a life of shifting armchairs into the garage so I can gaze on Luc Donckerwolke's fabulous design in the dead of night in comfort. Trips to the corner shop now involve hour-long round blasts down favourite B-roads. If I was married I would now be single again. But it would be worth it.