As regular readers may remember, I recently decided to drastically reduce the number of miles I've been putting on the Lambo, chiefly because I'd finally got round to totting up exactly how much the car was costing me. With its rapidly increasing mileage pushing the Murciélago's part-exchange value through the floor, it even crossed my mind to try the mileage-rewinding trick from Ferris Bueller's Day Off: jacking up the car and leaving it running in reverse for a couple of days! 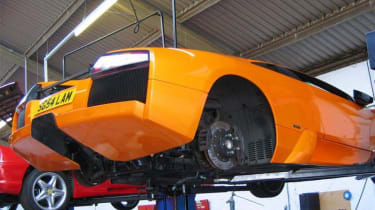 As regular readers may remember, I recently decided to drastically reduce the number of miles I've been putting on the Lambo, chiefly because I'd finally got round to totting up exactly how much the car was costing me. With its rapidly increasing mileage pushing the Murciélago's part-exchange value through the floor, it even crossed my mind to try the mileage-rewinding trick from Ferris Bueller's Day Off: jacking up the car and leaving it running in reverse for a couple of days! Happily, though, after a long conversation with the chaps at Lamborghini, we all decided that the car's high mileage had well and truly buggered its residual value anyway, which was all the excuse I needed to draft it back into daily service once more. Driving it for the first time in a month, I was soon reminded that Italian supercars often don't appreciate being given an extended siesta. Just ten miles from home the 'check engine' light illuminated on the dash, the nifty rear spoiler began repeatedly raising and lowering itself, an ominous loud ticking noise began emanating from the front, and to cap it all the satnav wouldn't turn off and kept trying to direct me to Edinburgh. Sure enough, within five minutes that thunderous V12 became a more economical V6. I began to get really worried when a strong smell of petrol wafted into the cabin... After limping home, I called out Lamborghini Assistance who, within three hours, had whisked SG54 back to sunny Stockport, home of Lamborghini Manchester, for some TLC. A couple of days later the orange beast was back, fully valeted and with all its faults fixed under warranty - including a new throttle body which would otherwise have cost £1000... Hopefully the Lambo will remain in good health for some time, particularly as I'm planning to take it out to Le Mans this year. If you're going and you spot an orange Murciélago with a Union Jack on the roof, that'll probably be me! Talking of foreign lands, a recent blast to Paris involved a memorable encounter with a Ferrari F40. Cruising at about 110mph on a deserted autoroute, I noticed a familiar shape gaining ground at a furious rate of knots. Within seconds Maranello's finest shot past at what must have been approaching maximum speed, before spitting flames an the overrun while making a sound not unlike a Kalashnikov. We caught up a few miles later and played tag for a while before the F40 peeled off. A truly spectacular sight. Now, I'd been trying to forget that the Lambo was probably due for a new clutch soon, possibly because a replacement, fitted, costs around six grand. If you insist on continually racing away from traffic lights, a Murciélago can go through a clutch in as little as 5000 miles, so at 26,000 miles I knew I was riding my luck. And with the Le Mans trip planned I thought it would be wise to play safe and get the job done. There was some good news, though. Upon discussing the work with Lamborghini's technicians I was informed that, as the clutch wasn't actually slipping, I could get away with replacing just the friction plate. OK, so it's still an engine-out job, but probably about half the cost. Bargain, eh? So a couple of weeks later I watched, utterly fascinated, as the monstrous Lamborghini V12 was gently winched out of the carbonfibre body. Three days later, with a much lighter left pedal and a considerably lighter pocket, the Lambo was running better than ever, especially with it having had the drive-by-wire throttle parameters reset while it was in. At least I had something to show for my money, because after all the effort and expense of extracting the engine, it turned out that the clutch was only 50 per cent worn and didn't really need doing... The next job will be to replace the huge 355mm front, 335mm rear discs, as they're all fairly corroded. It doesn't seem to be possible to source them from anywhere other than Lamborghini, though - at £1000 a corner. Needless to say, I'm determined to track some down independently. If anyone's got any suggestions, please drop me an email at fastfleet@evo.co.uk