The Murciélago hasn't made it out of the workshop at all, but that hasn't stopped Simon George indulging in Italian motoring heaven 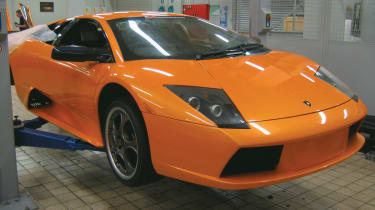 I’d been hoping that the Murciélago would be back on the road by now, and that this month I would be reporting on the new modifications. However, the removal of the V12 for the oil pump replacement has revealed a couple of unexpected problems, leading to some delays. But more on this later.

I couldn’t resist a quick trip to the Bologna motor show recently. And since all the supercar manufacturers are less than half an hour away, another visit to the Lambo factory proved irresistible. With cheap flights readily available, there’s simply no excuse not to go. If you’re tempted, as an alternative to staying at Maranello and dining at the Cavallino, try booking into a traditional Italian farmhouse like Il Giovanetto (www.ilgiovanetto.it) – only three miles from Sant’Agata and a firm favourite with Lamborghini staff – and grabbing a huge pizza at Maggi just down the road before taking a tour of the factory and museum the next day (contact Cristina Guizzardi in advance on cristinaguizzardi@lamborghini.com and mention evo).

Pagani is also only 20 minutes away through some beautiful villages (but not the easiest place to find without satnav), and after all this you can pacify the other half with a night or two in stunning, supercar-friendly Bologna.

But back to the Lambo, and although I’d banked on replacing the clutch plate, I hadn’t thought I’d have to replace the flywheel part of the clutch assembly as well. At £1500, my credit card was about ready to throw in the towel, but since the original flywheel had lasted almost 40,000 miles, of which at least 6K had been on track, I can’t really complain.

On a more positive note, upon inspecting the engine with the cylinder heads removed, the Lambo tech bods have been amazed at the lack of wear on the camshafts, probably thanks to regular oil changes.Another item needing replacing was the driver’s-side seatbelt buckle, which had come apart for no apparent reason. I’d managed to lose the internal springs, so was forced to price up a full new seatbelt – which came in at over £700. Discounting this option immediately, I asked a friend to nip down to his local scrapyard with the broken part in the hope of finding a match. After scratching his head for a few minutes, the proprietor did indeed locate a replacement. Cost? 50p. The donor vehicle? A Fiat Cinquecento…