Simon George dallies with a through-exhaust on his Lambo, but starts worrying about going deaf... 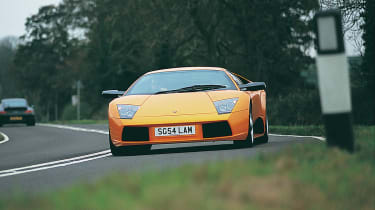 My hearing had always been pretty good. Until last month, that is, when the Murciélago had its cats replaced with straight-through pipes. The sound as the V12 cleared its throat above 3000rpm was fabulous, as were the loud pops and shotgun-like bangs on downshifts. And, of course, this was all accompanied by the new, louder roar from the BMC sports air filters and the gorgeous gearbox whine that has been present in all V12 Lambos since the Miura. Add in the matching orange flames being shot out of the Tubi exhaust tips and it made for an almost carnival-like experience, although I began to fear for the paintwork when I noticed soot on the rear bumper…

The real problem, though, was that as the miles piled on, the sound just got louder and louder. When travelling with a passenger, raised voices were essential to be heard. Worse still, at idle the deafening roar was akin to a Morris Marina with no back-box. Sat in motorway queues I found myself looking at the floor instead of meeting the gaze of incredulous drivers slowly passing by with their fingers in their ears.

Using the only multi-storey car park in Leeds where I’m happy to leave the Lambo, the noise set off at least five car alarms (I resisted the temptation to go around again and see how many others I could add). Meanwhile, the driver’s window shook, the flip-up Alpine CD player vibrated and the chrome gearlever constantly clattered against the metal gate. If the Murciélago only did 4000 miles a year, like most Lambos seem to, then this would have been a hoot. But as I drive the car most days, it soon became intolerable.

The final straw came when the driver of a truck in front of me in traffic got down from his cab and spent a minute or so walking slowly around his vehicle trying to find the source of the din. When he eventually noticed it was coming from the Lambo a look of relief crossed his face before he climbed back in and drove off. That afternoon I decided to wave the white flag and the call was made. Two days later SG54 was returned to normal, its cats back, together with my hearing. And a bill for £450.

A couple of problems to report this month. Regular readers may recall the starter motor labouring badly, especially when the V12 was running hot. A couple of new earth-straps solved the problem, but it’s now occurring again. Also, the handbrake is getting pretty stiff to operate. I was a Ferrari owner before I moved to the ‘dark side’, and curiously this is a problem I’ve encountered with both marques.

On a happier note, it turns out that the white LP640 I photographed at the Lamborghini factory a couple of months ago (evo 101) has now been delivered, and coincidentally it lives just a few miles down the road from me. Seems like SG54 has made a friend who also isn’t afraid of a little winter driving, so both Lambos enjoyed a bit of exercise along the superb roads over the Pennines recently. And in case you’re wondering, the scoops are permanently up on SG54 for the time being to prevent the hinges that raise and lower them snapping again. It might slow the Lambo a little, but it runs noticeably cooler, which can’t be a bad thing.