The 10 best Jaguar cars of all time 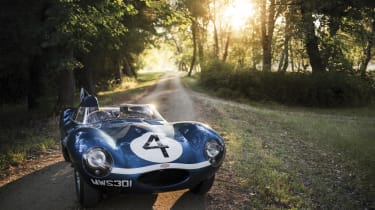 Jaguar’s resurgence to reclaim its place as a big player within the global market must go down as an extraordinary turnaround. When one considers that not so long ago, the famous British brand was clinging on to its very existence by the slimmest of threads, its recent return to form has been a reminder of what Jaguar can do when it gets things right. It’s also given cause to look back at the fantasic back catalogue of models that are the ultimate source of the affection that Jaguar is held in today.

With the announcement of the new Jaguar E-Pace, a car that is hugely important in terms of continuing to propel the firm on its upward spiral, and the recent unveiling of the Project 8 at Goodwood, we though it would be an ideal time to look back at some of the great cars that the company has produced over the years. An opportunity to remind ourselves of some of the truly extraordinary things Jaguar has achieved during its history.

Below is our pick of the greatest Jaguars of all time…. 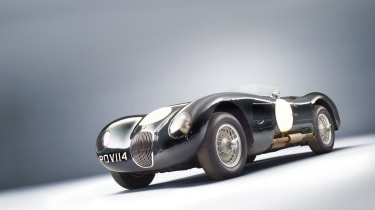 Although few people realise it, the C-Type has been one of the most influential cars in history in terms of dictating where the automotive industry is today. Produced between 1951 and 1953, the car won the Le Mans 24 hours twice in 1951 and 1953. More significant, however, is the fact that in 1952 Stirling Moss won the Reims Grand Prix using a C-Type Jaguar. This was the first time a car had won a race using disc brakes and marked the pattern that all car manufactures would eventually come to follow.

All Jaguar C-Type models used 3.4-litre straight-6 engines. Early cars used twin SU carburettors, however the later models were equipped with triple twin choke carburettors. With well over 200bhp and an all aluminium body that was aerodynamic even by today’s standards, it was the ideal endurance racer. 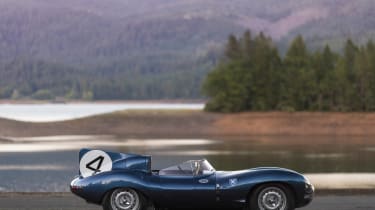 Being the car that followed the C-Type was always going to be a tough task, but follow it the D-Type did. It is one of the most iconic designs of all time and one of the first cars to really implement aerodynamics in order to improve performance and stability.

The infamous driver-side rear fin was not initially part of the D-Type design. However, to increase high-speed stability, the fin was added to some of the Le Mans spec cars. This increased stability supposedly allowed drivers such as Mike Hawthorn to achieve over 180mph down the Mulsanne straight.

Production started in 1954 and ceased in 1957. In full racing trim the engine was a 3.8 litre straight six wide-angle head unit that begat the engine used in the E-Type. The exact power figure is disputed but in full race tune, a number nearing 300bhp is more than possible.

The D-Type won Le Mans three times on the bounce between 1955 and 1957, so eclipsing the record set by its older brother the C-Type. The exact number of D-Types produced is still disputed and the added confusion that they came in either short or long nose form doesn’t help pin this down. It is rumoured that 18 factory team cars were produced alongside 53 customer cars and 16 XKSS models that were road-going versions of the D-Type. 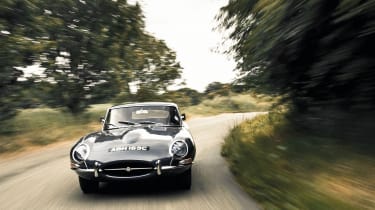 Despite the Jaguar E-Type being available in three guises, the series 1 is the most coveted and is the model that we would pick. When the car was released in 1961, Sir Williams Lyons reportedly didn’t like the way it looked and didn’t think it would sell. To suggest that he called that one wrong is an understatement.

On seeing the car, Enzo Ferrari reportedly remarked that it was the most beautiful car he had ever seen. The E-Type shared multiple parts and philosophies with the D-Type that preceded it. The engine was once again a 3.8 litre straight six, although there was a 4.2 litre option as well, and disc brakes came as standard. The chassis utilised racing technology where the body tub was attached to tubular framework that housed the engine. This helped to reduce weight and increase torsional strength.

The series 1 E-Type is one of the most iconic cars of all time and to this day stands out as an extraordinary piece of design. The series 1 also formed the platform for some limited edition racing versions. A one off low drag coupe was developed as a racing car but sold to Dick Protheroe. The main competition version of the E-Type came in the form of the lightweight, but of the 18 cars scheduled to be built, only twelve were finished. In 2014 Jaguar Heritage decided to build the remaining six lightweights and evo was fortunate enough to get to drive one of the six examples. 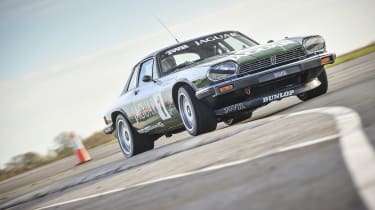 Here the iconic Jaguar V12 of the XJS was able to prove itself on the world stage. With cars developed by Tom Walkinshaw Racing, the XJS suddenly became a competitive and dominant racing car.

With power up to 450bhp, the car was used in the European Touring Car Championship to great effect where it won its first race, qualifying over 5.5 seconds faster than the next car at the Brno circuit in Czechoslovakia.

The XJS TWR was used to win he 1984 driver’s championship and the car also won the 1984 Spa 24 hours where Walkinshaw himself drove to victory. The car remained almost peerless in the ETCC until the end of 1984 when Volvo came along with the turbocharged 240T. It was a real return to form for a company whose illustrious racing history had been largely forgotten after years of disappointment. 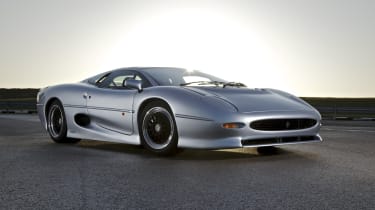 Another significant landmark car in Jaguar’s history, the XJ220 supercar is still a legend today. By achieving 212.4 mph, it was the fastest production of all time until the McLaren F1 arrived.

The XJ220 benefitted from receiving technology derived from Jaguar’s then successful Group C campaign in world sports cars and at Le Mans. Thanks to a 3.5-litre twin Garret turbocharged engine, the XJ220 produced 540bhp and could get to 60mph in juts 3.6 seconds. The only real shame with this car is that we long for it to have been given the V12 race engine that was developed for its heart as opposed to the 3.5 litre twin turbocharged six from the Metro 6R4 Group B rally car. The thought of an XJ220 with a group C derived V12 is just too much to take in. 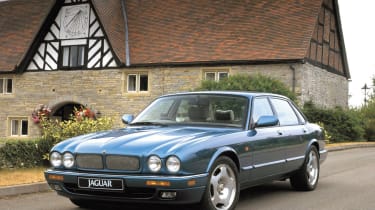 Despite being loosely based on the 1986 XJ40, an often rusty and unreliable car, the XJR of 1994 was an absolute gem. With sinister looks and supreme luxury, the car was as exciting to drive as it was menacing to look at.

With a supercharged straight-six that enhanced the noise of the traditional supercharger shriek, the car was able to accelerate from standing to 60mph in under six seconds thanks to a 320bhp output. Top speed was 155mph and you will find that an E34 BMW M5 of the time will be given a real run for its money by this Jaguar.

The majority of the examples sold were automatics. However, if you’re in the market we suggest searching for a manual version. The X300 is said to be notably faster in manual guise and thanks to its clever suspension, is a real driver’s car. 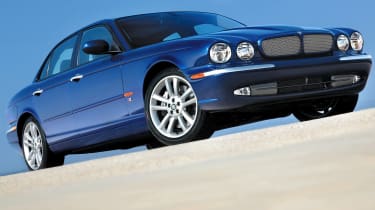 In 1997 the howling supercharged straight-six in the XJR was replaced by a new V8. Power was instantly raised and the initial models received 370bhp.

What made the car great in the first place still rings true today. With a genuinely expensive, luxury feel to it, the XJR is always a desirable and pleasant proposition. Its advanced aluminium construction means despite the retro looks it feels light on its feet and the V8’s power can be used to maximum effect. 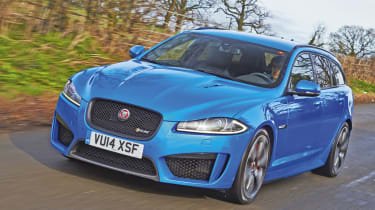 There is just something about a rapid estate car, particularly when it’s a Jaguar as opposed to a BMW or an Audi. By combining ludicrous power with the charming good looks of the XF estate, Jaguar developed a car that could do everything - the XFR-S.

With 542bhp and a ZF eight-speed gearbox, it’s the perfect car in which to blast along an autobahn. Likewise, you could take the kids to school in perfect comfort thanks to the prodigious amount of space. With the top speed being limited to 186 mph, it is faster than its German rivals and arguably has greater presence than all its contemporaries. With Nurburging spec chassis components it is just as much of driver car as it is fast in a straight line. It isn’t quite as sharp as the equivalent saloon and the interior was a little dated but nonetheless, amazing all the same. 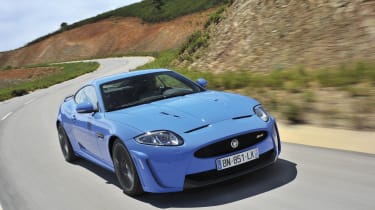 With as much power as the XJ220, the XKR-S was a real sign of intent from Jaguar. It was clear that the firm wanted to shake its reputation of middle aged, mildly quick, luxury performance cars. Instead it wanted to re-enter the high performance market with a bang.

The XKR-S received an additional 39bhp over the standard XKR and suspension was beefed up thanks to development on the Nurburgring. Visually the car was as striking, as it was loud. The XKR-S received a whole host of visual upgrades aimed at improving aerodynamics and looks. With a large front splitter and general body kit all round, the car looked instantly distinguishable from the standard car and alarmingly aggressive. We loved how compared with the standard XKR it felt so pure, less synthetic and refreshingly analogue. It was a blunt instrument to say the least but it was exciting, thrilling and demonstrated how far Jaguar could go when it lets hair down a little and sacrifices some of its core values. 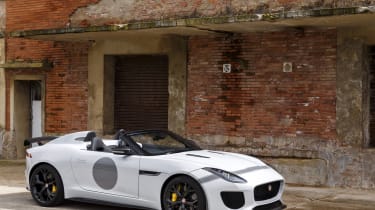 The Project 7 was the real launch pad for the Jaguar’s Special Vehicle Operations department. In essence the Project 7 was an F-Type unplugged. A no nonsense unhinged version with no restrictions.

With 567bhp it was the most powerful car that Jaguar had ever produced. The car existed as an homage to great cars within Jaguars back catalogue. The car featured hugely uprated aerodynamics that utilised a rear stabilising fin straight from the D-Type. Despite heavily altered looks, the car remains unmistakably an F-Type.

It’s phenomenally fast but the Project 7 is also huge fun due to the lairy nature of its rear end. Was it a missed opportunity to create the ultimate scalpel sharp F-Type? Potentially but either way it’s a great car, we just wish they’d built more.