It marked a long-overdue return to form for VW’s hot hatch, and now you can find out just how brilliant it is for yourself for less than half the car’s original price. Here’s what you need to look out for 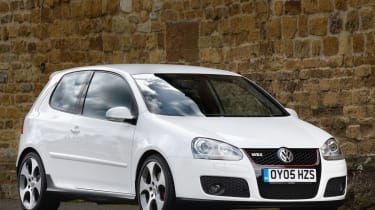 A performance icon – that’s the GTI, right? The original, late-’70s version was the car that created the ‘hot hatch’ category, after all. Truth is, though, subsequent incarnations failed to live up to the original’s promise, tending to sacrifice driver satisfaction in the pursuit of mass appeal. The mk2 GTI brought extra weight, the mk3 was bland, and the mk4, while taking the model further upmarket, always felt as though it had been designed with performance as an afterthought.

The mk5 GTI, however, was a significant step forward for many reasons. Not least amongst these was the car it was based on. By the time the fifth-generation Golf was launched in 2003, other manufacturers had begun endowing everyday cars with the kind of handling that had been reserved purely for performance models only a handful of years previously. Volkswagen upped its game accordingly and, as a result, the mk5 Golf was effectively a brand new car rather than simply a facelift or mild update.

So while the exterior was distinctly VW, the chassis was completely new. Most notably, the mk4’s beam rear axle was replaced with a fully adjustable, independent set-up. Combined with the traditional MacPherson strut arrangement up front, and suitably tweaked for the GTI’s arrival in early 2005, the result was a chassis that was tight and rewarding yet compliant enough for everyday use.

However, it was the powerplant that would set out the mk5 GTI’s stall: a 2-litre version of the turbocharged FSI engine used across the Volkswagen/Audi/SEAT families. The increase in capacity from the more familiar 1.8 litres contributed to a peak power output of 197bhp, which was plenty to endow the 1336kg hatch with acceleration and responses that lived up to the iconic badge. Another element new to the mk5 was the option of a DSG gearbox. Incredibly refined, it provided lightning-fast and impeccably smooth gearshifts. It also shaved a further 0.2 seconds off the six-speed manual car’s 7.2sec 0-62mph time.

Overall, the mk5 Golf GTI was a car that felt tight and cohesive to drive. Performance was excellent, handling and road-holding were almost peerless in its class and, just like the original GTI, it delivered driver enjoyment in spades. It’s for these very reasons that the mk5 GTI also makes a handy trackday car, which can be something of a double-edged sword. Potential buyers need to check carefully for signs of circuit use as, while this won’t necessarily mean there are problems, it is worth knowing as much of a car’s history as possible. If you want to use it on the track, though, then you’ll be hard-pressed to find more fun from a daily driver.

Edward Belshaw - Edward has owned the a 2006 mk5 GTI for a year now, but finding his perfect car took a little time. ‘I wanted a hot hatch and tried to test-drive all the likely candidates, like the Astra VXR and the Focus ST, but as a 22-year-old walking into dealerships I got nowhere.

‘I eventually tried two manual GTIs and realised that it was the Golf I wanted, but I was also keen to try one with the DSG gearbox before making my decision. I saw this car advertised, went to drive it and that was it: sold.

‘The addition of DSG makes the car so flexible; you can drive in traffic or cruise and feel fine at the end of a five-hour drive – while getting 40mpg. But if you want to have some fun, it’s fantastic. The engine pulls really well, the gearchanges are unbelievably quick and smooth, and the whole experience is incredibly rewarding.

‘I haven’t had any problems with my GTI and I’d buy another one without thinking – in fact, I probably will.’