SQ5’s return to diesel makes sense, and marginally improves the drive too 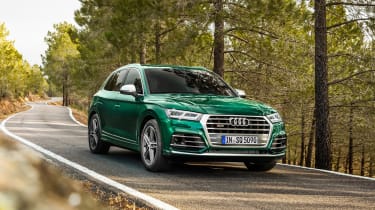 When the Audi SQ5 made its debut in 2013 it arrived with diesel power – an obvious choice, you might have thought, given the demands of the SUV market. Nevertheless, its replacement in 2017, based on the second-generation SQ5, ditched diesel for petrol V6 power – and didn’t quite hit the mark.

Diesel has become a dirtier word than most over the past few years, but now it has returned to the SQ5 and is sure to attract back customers who might have been deterred by a thirstier petrol variant. With it comes 48V mild-hybrid tech and detail tweaks to improve the driving experience. Will it right the wrongs of the petrol model?

The 3-litre turbocharged diesel V6 is somewhat ubiquitous throughout Audi’s line-up, but that’s little surprise given its suitability for hauling along relatively large and heavy vehicles with unflinching ease. 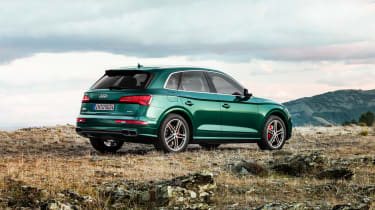 An eight-speed automatic transmission remains standard, as does quattro all-wheel drive, while a Sport Differential for the rear axle is optional. The changes are nevertheless enough to skim three tenths from the SQ5’s 0-62mph time, now 5.1sec, while top speed remains a limited 155mph. Economy has improved, as you’d expect, although the new 34.4mpg WLTP figure would look more impressive had the petrol not achieved a similar (but less realistic) 34mpg on the old NEDC test.

Along with the 48V mild-hybrid technology Audi is rolling out across its line-up – with a belt-driven starter-alternator allowing fast engine stopping and starting, energy recuperation, coasting and other tricks – the new V6 also includes an electric turbocharger.

This acts much like a conventional turbo, forcing gases into the combustion chambers at a higher rate than atmospheric pressure, but rather than being driven by exhaust gas (though there’s a conventional exhaust gas turbo too), it uses a small electric motor to spin up the turbine in 300ms to improve response. In practice it’s not really detectable – this is no Ferrari 488 as far as throttle response goes – but the tech certainly has potential.

It’s a curious sensation coming to the SQ5 from the S6 Avant we drove on the same day. The first thing you notice is the mild inconvenience of shuffling your behind over a prominent bolster into the driver’s seat, in contrast to the easy-to-access nature of most SUVs; the second is an interior layout that, while logical and well built, already seems quite old-hat next to the two-tier touchscreens that are steadily spreading across the rest of Audi’s range.

The next is that from the moment you move off, the SQ5 doesn’t feel as dynamic as its siblings. Not just because the S6 and S7 are lower, but also because, in contrast to their precise and well-weighted steering and ultra-agile all-wheel-steering set-ups, the SQ5’s responses seem to be delivered through layers of molasses. 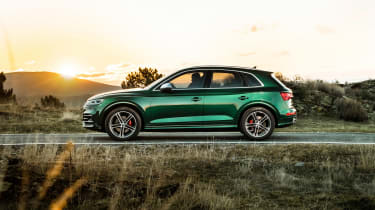 In isolation, it’s undoubtedly a better car to drive than before, and like the S6 and S7, the SQ5 makes more sense as a six-cylinder diesel than it did as a six-cylinder petrol. There’s some delay stepping off the mark and kicking down from higher gears as the turbos spool and the auto ‘box decides which gear to give you, but as soon as the flame is lit, the SQ5 rears up and fires down the road with plenty of pace and satisfyingly little commotion. If you like your family wagons effortless, the SQ5 has you covered.

And while it feels unresponsive next to its more dynamic stablemates, our test SQ5, without Dynamic Steering, feels more natural to pilot than the last we tried. There was always a balanced, grippy chassis underneath the car, and it’s much easier to appreciate with better weighting and more linear responses.

Our test car also has adaptive air suspension and the Sport Diff fitted too, but the effects of each are more difficult to discern without driving back-to-back with cars without said options. Suffice to say, ride quality (on smooth German roads, at least) and traction both seem more than suitable. The brakes too, given they have no more weight (in fact, slightly less at 1980kg) to haul down than those on the equivalent S6 Avant.

We wouldn’t go as far as to say the latest SQ5 TDI is a thrilling car, but it’s an accomplished fast SUV, and now feels more comfortable in its own skin than it did as a petrol-powered model.

Audi quotes a provisional price of £55,035 for the SQ5, which is marginally above the cars Audi considers to be rivals. Those rivals don’t include Porsche’s Macan, which has abandoned diesel power and thus leaves a gap in the market for the likes of BMW, Mercedes and Porsche’s VW Group-mate Audi to exploit commercially. 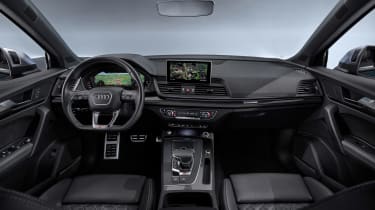 Rivals do include the Mercedes-AMG GLC 43 at £49,890, and the BMW X3 M40d at £53,450. The former is petrol-powered, and was a keen rival for the previous petrol SQ5, albeit for us a more involving car to drive. With up to 26.7mpg on the WLTP cycle, however, it’s an indication of how much more sense diesel makes in this market segment.

The X3 M40d, meanwhile, shades even the Audi with a WLTP figure of 36.7mpg. It’s quicker too, at 4.9sec to 62mph, despite a small power and torque deficit. A lighter, 1820kg kerb weight may be to thank for that, and the latest X3 probably just edges the Audi as a driver’s car, if not as an object to look at or a place to sit.