The new SQ5 is an S-tuned version of the Q5 SUV, and it's the first of Audi's S-cars to feature a diesel engine 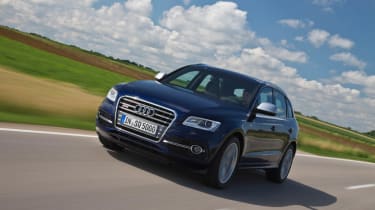 A double pioneer – not only is the SQ5 the first ‘S’ version of one of Audi’s SUVs, it’s also the first diesel model deemed worthy of joining the performance sub-brand. Power comes from the same twin-turbocharged 3-litre V6 TDI engine that we’ve already been impressed by in the A6 and A7, alongside a suitable dynamic retuning of the standard Q5’s suspension. It will cost £43,015 when it goes on sale in the UK next year.

The S-ification has been a relatively mild process, it’s fair to say. The SQ5 sits 30mm lower than the standard car, with firmed-up springs and dampers – but it does without the active dampers that the company tends to fit to its brawnier offerings these days – we’re told that old-fashioned passive dampers are more than up to covering all the dynamic bases. On that, we’ll see.

The engine is the new twin-turbocharged version of the company’s existing 3-litre V6 TDI, which uses a smaller turbocharger at low engine speeds to improve response and then a larger one to supply the motor’s voracious appetite for boost at higher speeds. Peak power arrives between 3900 and 4500rpm, with a claimed 308 bhp on tap – accompanied by an almost-scary 479 lb ft of torque. Together with the standard-fit eight-speed torque converter auto (the twin-clutch transmission of lesser Q5s being unable to handle the torque) those numbers translate into a claimed 0-62mph time of REF seconds, and a top speed goverened by one of those pesky 155mph electronic limiters. Drive is delivered to all four wheels, but the SQ5 doesn’t get Audi’s response-tightening ‘sports differential.’

As we’ve said before, it’s hard not to warm to a car that’s powered by this engine. The 3-litre unit delivers its massive urge to the accompaniment of an impressively deep-chested burble, and as in its other applications it possesses the sort of any-speed shove that gives it serious real world performance. Most fully fledged supercars would require multiple downshifts to deliver the sort of overtaking punch that’s yours in the SQ5 simply by flexing your right foot.

The rest of the dynamic experience plays second fiddle. The SQ5 is definitely more responsive than the standard car, but the entire Q5 range has now been switched to Audi’s new all-electric power steering. Which, as in other applications, smoothers almost all feel with a layer of digital numbness. Audi’s ‘Drive Select’ system allows you to vary the system between ‘comfort’ and ‘sport’ modes – but these do little more than alter the weighting. Given the passive dampers it’s a shame Audi couldn’t come up with a similar one-size-fits-all approach to steering.

And, to be fair to the dampers, ride quality is decent and body control is good. It feels softer than your typical ‘S’ car when flung down a road, but there’s plenty of grip and a good balance between front and rear. Not that the SQ5 is a car you’re going to take for a full ESP-off workout, for the simple fact that you can’t – as with all Audi’s SUVs the stability control can only be switched into a (slightly) more permissive ‘offroad’ mode, which steps in very quickly if slip is detected.

When put in ‘sport’ mode the eight-speed autobox has a surprisingly forceful shift action. It can be manually over-ridden using steering wheel paddles, but – when you do – it seems reluctant to deliver more than one downshift in quick succession.

In terms of raw firepower, the SQ5 has only one rival - the BMW X3 35d. That matches the SQ5's power output but beats it on economy - and is £1000 cheaper in M-Sport trim. On the Audi's side, the BMW is slightly slower.

But don’t think of the SQ5 as being a fully-fledged sports SUV. On the evidence of our first drive, this is a fast Q5 more than a pure blooded ‘S’ car.

The official economy figure is 39.2mpg. During a mix of rapid Autobahn driving and twisty country roads we managed a less impressive 24mpg according to the trip computer.