We round up the best convertible cars on the market, from £20k MX-5 to £2million Veyron Vitesse 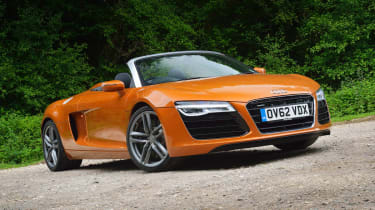 Convertible cars are inherently flawed. Without the structural rigidity of a fixed roof, their handling abilities are, on paper, worse than their coupe alternatives, with a typical British summer offering few too many opportunities to reap the benefits of their open roof.

There are plenty of exceptions, though. The hardcore set – Lotus, Caterham, Atom, KTM – are designed from the outset as open-top cars, with enough strength in their chassis to match or better many traditional hard tops. And there are the convertible supercars – 458 and 12C Spiders, Aventador Roadster – which offer a dramatic soundtrack and extra posing potential, and the small sports cars – Boxster, MX-5 – defined by their roadster layout.

Below are ten of the very best on sale. Tell us your favourite on the evo Facebook page.

Audi R8 Spyder V8The Spyder may forego the regular R8’s iconic sideblades, but it retains the coupe’s sky-high desirability and polished dynamics. Available with 424bhp V8 and 518bhp V10 engines, we’d choose the smaller unit for the benefit its lighter weight brings to the R8’s handling. But if you want to gain the full ten-cylinder warble of the V10, you really aren’t missing out…

Ferrari 458 SpiderIt’s not a convertible in the traditional sense – its folding metal roof is trick in operation but more like a targa in the size of sky and sun it allows into the cabin – but you’ll hardly care when its 4.5-litre V8 is popping, crackling and screaming directly into your ear canal. 562bhp and a 198mph top speed ensure it’s also one of the most powerful and fastest Ferraris ever, evidence cabriolets don’t have to be soft.

Lotus Exige RoadsterThe standard Lotus Elise S – powered by a 345bhp 3.5-litre V6 engine – took joint honours with the Pagani Huayra in our 2012 Car of the Year contest. And while the Roadster version surrenders 30mph, its top speed dropping to 145mph, it gains a more intimate driving experience with no impact on the £53,000 price tag.Porsche Boxster SThe mk3 Boxster has received much keener praise than its predecessors thanks to its pint-size Porsche Carrera GT styling, but its handling abilities are still as high as ever. The basic 261bhp Boxster 2.7 is brilliant, but the most fun can be extracted from the 311bhp Boxster S 3.4, a car whose £45,384 price tag is actually something of a bargain, cheaper than its Cayman equivalent. The real sweet spot of the entire Porsche range.

Caterham Supersport RThere are plenty of track specials we love to bits, but the word ‘convertible’ should really only be applied to a car that can actually be converted, and as one of the few with a plausible, rain-deflecting roof system, Caterham grabs the hardcore honours here. Any Seven is an exceptional buy, but the sweetest for both road and track use is the new Supersport R, which serves up supercar power-to-weight for £27,995.

Jaguar F-type V8 SThere are three Jaguar F-types to choose from, and in truth, they’re all great. The most exciting of the bunch, though, is the 488bhp V8 S, with an exceedingly sonorous supercharged V8 engine and slightly wild and spiky dynamics that ensure it’s a properly exciting little roadster. It also has the highest top speed in the range (186mph) and the swiftest 0-60 time (4.3sec).

Lamborghini Aventador LP700-4 RoadsterHow do you improve a Lamborghini Aventador? Lop off the roof and let its 12-cylinder orchestra pipe directly into the interior. If you want the lairiest, most visually arresting supercar on the planet but still want to top of your tan, the 690bhp, 217mph 3.0sec to 60mph Aventador Roadster is the only way to go.

Porsche 911 Carrera 4 CabrioletIt may cost twice as much as a Boxster S, but the 911 is still a special thing and its GT car qualities are now more rounded than ever. It’ll seat two small people (or kids!) in the back and nowadays it can top 30mpg in mixed driving. It may not have the character of an Aston or the supercar panache of an R8, but it’s a sweet middle ground.

Mazda MX-5It would be impossible to round up the best convertibles on sale without a mention for the little Mazda, the front-engine, rear-drive sports car defining its genre and inspiring the appearance of the Toyota GT86 and Subaru BRZ, cars which ape its fine balance but cost more and don’t yet offer a cabriolet version. It only has a modest 158bhp, but that’s more than enough to have fun.