Entry-level P300 still has the sweetest F-type chassis, but the 567bhp R’s appeal is as enduring as ever 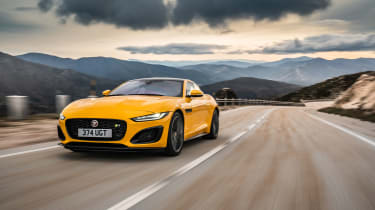 Not many cars seem to attract the goodwill of a Jaguar F-type. Seven years after launch it’s still the kind of car that attracts admiring glances and positive comments from onlookers, and while there are better sports cars out there, fewer have the same sense of occasion as Jag’s flagship.

While the F-type has been refreshed in the past, with several engine variants coming and going, it’s taken until 2020 for Jaguar to make any real changes to the styling. The new nose will be an improvement for some and a step back for others, but it does serve to make the F-type look a little longer and, by extension, perhaps more elegant. 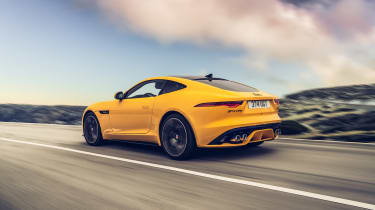 This year also sees the old supercharged V6 exit the range and a supercharged V8 badged P450 enter it, while changes to the suspension and steering give each model, from the entry-level four-cylinder P300 to the R tested here, its own dynamic character.

Styling aside though, the F-type R has some tough competition these days, so a drive of the new model in an uncharacteristically damp Portugal has given us our first chance to see whether those changes have been worthwhile. 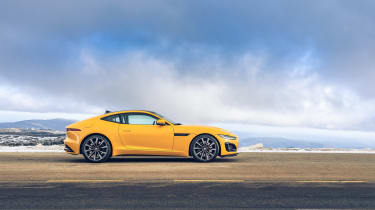 Jaguar’s 5-litre supercharged V8 makes its reappearance in the R, though this time around it’s finally the unit from the pre-facelift SVR, making 567bhp at 6500rpm and 516lb ft between 3500 and 5000rpm.

That, we’re sure you’ll agree, is plenty, and directed through an eight-speed ‘Quickshift’ automatic transmission and all-wheel-drive system (both standard) it’s good for a 0-60mph sprint of 3.5sec (3.7sec to 62mph) and a top whack of 186mph.

A thunderous exhaust note is once again one of the F-type R’s party tricks, though it’s no longer quite so thunderous when you start it up each morning, thanks to a default quiet start function. This can be overridden by pressing the exhaust button before you start, or setting the car in Dynamic mode – and Jaguar was keen to remind us it’s as rowdy as ever at full throttle. 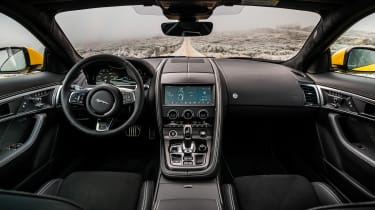 The R gets new springs and dampers, while both the R and its new P450 sibling get stiffer rear knuckles, tighter bushings and uprated wheel bearings. All new F-types have steering set-ups individually calibrated to their application, with different weighting and even steering ratios – the R’s set-up being mid-way between the relaxed P300 four-cylinder and the P450’s more aggressive set-up befitting Jag’s intention for it to be the purist’s choice.

Otherwise, it’s as per the previous F-type R, with double wishbones all round, electronically adjustable dampers, and a kerb weight that’s curiously heavy for something with so much aluminium in its construction, at a quoted 1743kg – around 100kg more than a 911 Carrera 4S with similar performance figures, and over 200kg more than the four-cylinder F-type P300. 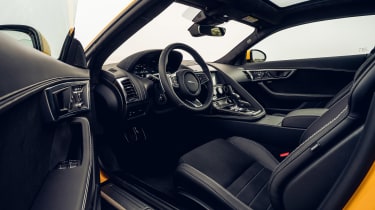 Quite entertaining. Much of that comes from the delivery and sound of the supercharged V8, which is as boisterous, vocal and responsive as ever. Leaving the line in a hurry is very easy indeed, with huge straight-line traction and strong power delivery thanks to the lag-free nature of the supercharger. Shifts from the eight-speed are brisk, though Jag’s fiddling with the software has introduced a frustrating thump to the changes at high rpms in Dynamic mode. Jaguar deems it appropriate for a sports car, but ‘irritating’ is the first word that springs to mind when driving it.

That said, overall it feels just a little more relaxed than before, as if Jaguar has tuned out some of the overly jumpy nature that could catch out the previous R. It’s still hyper-responsive to throttle inputs in Dynamic particularly, but even on damp roads it doesn’t seem to overwhelm the rear tyres quite as easily as it used to.

Just as the power delivery seems a little less hyperactive, so too does the chassis seem more in tune with your inputs. The new steering ratio is slightly more relaxed than before, and easier on the self-centring than some other recent Jags, including the new P450. The benefits are numerous: better feedback, less muscle required on a twisty road, and less chance of unsettling the F-type’s bulk when you’re tipping it through a tricky turn. 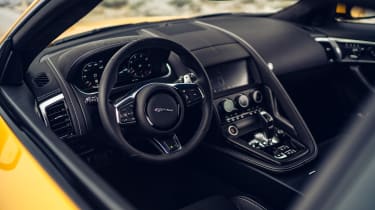 Jaguar has been keen to give the car a rear-wheel-drive feel, and it’s worked – from the moment you turn in the car takes a poised stance, and from there you can get on the power and feel the car pushing you along rather than dragging from the front. There’s plenty of turn-in bite and good mid-corner grip, and while you can feel the weight moving around under braking or when you need to flick from one direction to another, the body is well controlled.

Throw in strong stoppers and a mature ride (not to mention a cabin that has enjoyed a few quality tweaks and improved infotainment, and revised styling that still turns heads) and the F-type continues to neatly bridge the gap between sports car and GT. And the fun factor, thanks to the balanced chassis and monstrous power output, is as present as ever.

If there’s one real demerit to the revised F-type R, it’s that the price, at £97,280, still feels like a very large pill to swallow. The F-type has always felt like better value at the lower end of the range, where you benefit from the same attractive styling and sometimes an even better chassis, at the expense of some straight-line performance. With the four-cylinder F-type P300 starting at £54,060, that remains the case with the revised model. 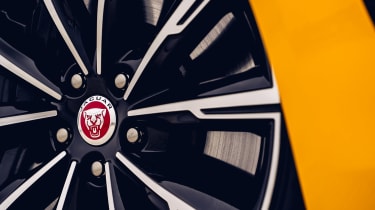 That’s perhaps even more the case now that the P450 V8 exists, with its £69,990 sticker price. It loses relatively little to the R in driving dynamics, but will leave you in slightly better standing with your bank manager.

In terms of parity on both performance and price, one fairly direct rival to the F-type R is Porsche’s 992 Carrera 4S. Like the Jag it’s all-wheel driven, but while it makes less power than the Jaguar, lower weight helps it undercut the R by a tenth to 62mph, and best it by 4mph up top. The 911 also offers a pair of extra seats for luggage or small children, and at £98,418 is in the same pricing ballpark. Like the F-type, the latest 911 is a hybrid of a true sports car and a grand tourer, perhaps making them closer rivals than ever.