A shredded drive belt brought the day's proceedings to an abrupt end... 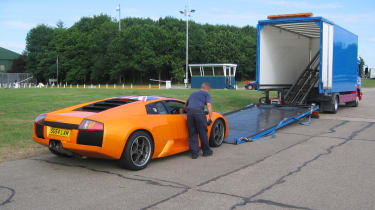 Strange but true: I’ve actually been trying to find a way of quietening the Lambo recently. With ever more restrictive noise regulations, the monster Tubi exhaust is making it almost impossible to get on track without being black-flagged. After some head-scratching, a specialist fabricator came up with the bright idea of making the Tubi’s end tips detachable. Then, for trackdays, a couple of lengths of narrow pipe (crimped at the ends) could be slid on instead and secured by two clamps.

Worked a treat. Until I arrived back from a circuit in the early hours one Sunday, that is. Gently manoeuvring the now quiet Lambo near the garage, I heard a pop followed by a racket resembling a bag of spanners in an oil drum. Turned out the back-pressure had shot one of the makeshift silencers off like a rocket-propelled grenade, waking half the neighbourhood in the process! Back to square one, then.

I’m looking forward to a trip to the Lambo factory in September to spec-up my LP640, due in March. I’d originally hoped to get one of the first examples, but when I swapped my order to the new Miura, thinking Lamborghini would build it, I lost my place in the LP640 queue. Doh!

A very late 30K service at Lamborghini Manchester recently revealed only the need for a new battery, but at £400 I’m going to do a bit of shopping around first. The bill wasn’t too bad (£750), since the expensive part – adjusting the valve clearances – had already been done when the clutch was changed (evo 092).

A couple of months ago I mentioned how reliable the Lambo is considering the amount of track use it gets. Asking for trouble! Halfway through a lap of Bruntingthorpe recently, the battery light appeared, closely followed by an ominous oil-pressure light. I pulled over immediately to find the auxiliary belt (which drives the alternator, power steering, etc.) had ripped itself to shreds. To make matters worse, a Ferrari 360 Modena that I co-own (which also earns a crust giving hot laps) gave up the ghost an hour later with gearbox problems.

Lambo Assist arrived an hour later to rescue the Murcie, closely followed by the AA for the 360. Since then, a call from Simon Stubbs, senior technician at Lamborghini Manchester, has indicated that the problem might, in fact, be a lot more serious than a shredded belt. I’m now a worried man, especially as the factory, in common with a lot of Italian industry, closes soon for a whole month, meaning that obtaining any parts not in stock could be difficult.

I once read that running an Italian supercar is like going out with a supermodel. Fantastic when they aren’t playing up, but when they are you wish you were dating an accounts clerk from Grimsby. More next month…