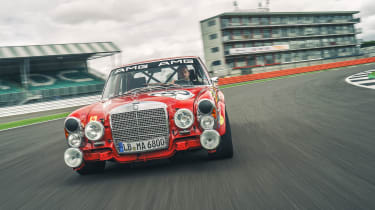 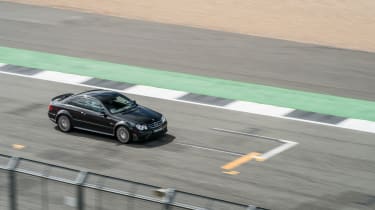 Perhaps the 3.2 AMG didn’t hit the mark, but it provided a basis for AMG to perfect for the following decade: a big engine in Merc’s smallest saloon. It improved on 190 with the C36 and C43 before the concept evolved into the CLK63. Since then, despite a shift to turbocharging, the theory for AMG’s small saloon or four-seater coupe hasn’t really changed: a V8 engine with the performance to make rear tyres quiver in fear, dropped into a compact body.

As well resolved and as fun as the CLK63 was, AMG wanted to push it further. After the success of the first Black Series car, a carbonfibre fixed roof version of the SLK55, AMG pulled the same trick and creared the pared-down, souped-up, widened CLK63 Black Series.

Most of the CLK63’s interior was removed for the Black Series, where plush leather seats should sit are either carpet, at the back, or a set of fixed-back Recaro race seats in the front. If the flared arches and lower bumpers hadn’t given away the car’s intent, then the seats, and lack thereof, certainly do. The Recaros hold you tightly in position and are upright, pushing you towards the steering wheel, and it feels like a proper track car. 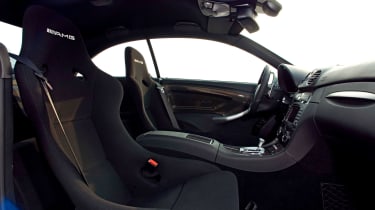 The extensive chassis tweaks – strut braces, strengthened body, bespoke suspension components – are matched by the changes to the engine. An extra 26bhp more than the standard CLK63’s 474bhp was achieved by a less restrictive inlet and exhaust system, a new ECU, bigger radiators and an additional oil cooler. Actually there are three extra oil coolers over the standard CLK63, that one for the engine, one for the gearbox and another for the multiplate limited-slip differential.

The engine has the gurgling rumble at low to mid RPM that’s typical of a V8, yet it revs with an urgency that’s unlike the initial sound track. Keep your foot in, just as the engine encourages you to do, and the revs rip around to the redline, the note changing to a harder, more intense timbre. The noise goes from the best V8 sounds on offer in any car, burbling muscle car and hard-edged GT3 race engine, in just one gear.

You have to change up at some point though, 7000rpm to be precise, but the idea of using the old automatic gearbox isn’t all that encouraging. A pull of the right paddle reveals the transmission to be a pleasant surprise. Okay, it isn’t the snappiest or quickest change, it isn’t in the same league as modern autos, but it's proficient enough at swapping cogs not to ruin the experience. 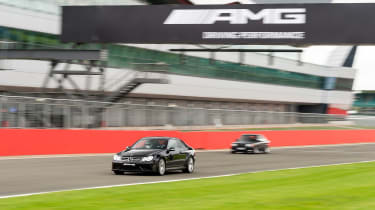 As impressive as the drivetrain is it’s the chassis that really sets the Black Series apart. The front axle generates so much front grip that it almost tricks the rear into oversteer as soon as you turn the wheel. There is enough grip from the rear 285/30 R19 Pirelli P Zero Corsas to keep it online, but even a slight brush of the throttle wants to add a degree of rotation.

Such instant and constantly available adjustability makes the Black Series so agile, it means the task of extracting any speed from it is difficult but yet completely captivating. With the traction aids fully on, as this event sadly dictated, keeping the ESP from nibbling away at your progress while still trying to move along at a decent pace was an enjoyable job. Although, I am absolutely convinced it would have been even more enjoyable still teasing out small slides from corner entry to apex.