Can’t quite stretch to a One-77? Don’t worry – you could be enjoying a V12-engined Aston Martin for as little as £30k. 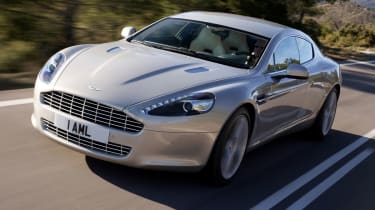 The Rapide has not been a big sales success for Aston, and since Astons tend to be mileage/price sensitive, it depreciates heavily if used as a daily driver. Early cars are now looking great value and starting to attract attention, particularly from DB9 drivers starting a family!

It’s one of the best-sorted Astons, and well-specced too, with adaptive damping, larger brakes, a new rear subframe, shorter final drive, etc, when compared with the DB9. All Rapides have Touchtronic; there was no manual alternative. Rear DVD screens are a popular option, and standard on the 2010 Rapide Lux special edition, which features a bespoke luggage set too. The reversing camera on later cars is also prized. Early cars were built at Magna Steyr in Austria (production recently switched back to Gaydon) with no adverse effect on quality, although there’s still the occasional electrical quirk. Do take a test drive; some drivers find forward vision a little restricted, and pay particular attention to the brakes – this is a heavy car (190kg heavier than the DB9) with 470bhp. As with the DBS, test the damping modes and the Sport button.

Steve Page - ‘I bought my Rapide new in July 2011. I tried the DB9, the Virage and the Rapide – the Rapide was actually nicest to drive. I also loved the looks and the space. In 12 months I had some great drives, but only covered 4000 miles because I kept it for special journeys. It was reliable, with no faults, but then I saw a Ferrari FF and had to have it. It’s faster, more “special” and its technology is on a different level. I love Aston, but it does need resources and new tech.’