Is Porsche’s new 992-gen 911 at its sweetest at the entry point in the range? We drive the new 911 Carrera to find out 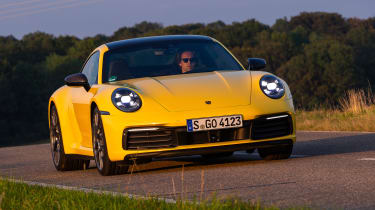 Porsche launched its latest 992-generation neun-elfer with the Carrera S, but in previous generations the basic Carrera has always been a highlight, with more than enough power to deliver an exciting drive.

So far though we’ve not been entirely convinced by the 992 itself, with its more grown-up, Panamera-like vibe hiding some of that 911 character at regular, road-going speeds. This is our first opportunity to try the 992 in its entry-level form - so could a slightly simpler, slower 911 be a better 911?

Like the Carrera S above it in the range the entry-level Carrera uses a 3-litre variant of Porsche’s flat-six. Twin-turbocharged, it develops peak power of 380bhp at 6500rpm and spreads its 332lb ft of torque from 1950-5000rpm. 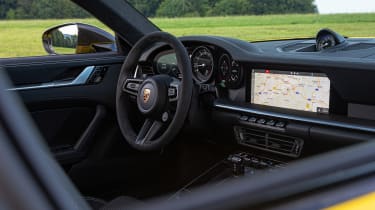 Those figures, for reference, are 64bhp and 59lb ft down on the Carrera S, but the power figure is 15bhp up on the old 991 Carrera, with identical torque. The sole transmission is, for the time being, based around an eight-speed PDK sending its power to the rear wheels. In terms of weight, this entry-level Carrera comes in at 1,505kg - 10kg less than the Carrera S and 55kg more than a 991 Carrera with PDK.

As we’ve come to expect, even the 911 Carrera is a very fast car these days. 0-60mph comes up in four seconds flat with the 0-62mph time two tenths behind, each being half a second off the Carrera S. Flat-out you’ll get 182mph.

Unless you’ve been marooned on an island since the early 1960s you’ll be familiar with the 911’s basic rear-engined layout, though the ingredients have changed a little over the years. Today’s car has a mix of steel and aluminium in its construction, MacPherson strut front suspension and a multi-link rear, and since the 991, its engine has been mounted further forward than ever.

It’s still rear-wheel drive though, while Porsche has retained electromechanical power assistance for the steering in this generation. The standard wheels for the Carrera are 19 inches at the front and 20in astern (with 235/40 and 295/35 tyres), though our test car had been upgraded to 20in and 21in items. 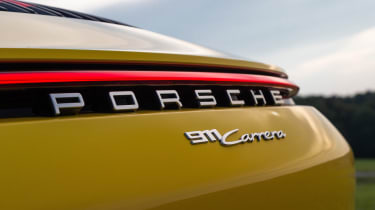 Not unlike the Carrera S as it turns out, if marginally less rampantly accelerative. But then with the same size wheels and tyres as a Carrera S, optional carbon-ceramic brakes, Sport Chrono and a sports exhaust, and standard PASM, that power deficit is the only thing that really separates this particular Carrera from an S.

As such, it retains all that car’s highlights and foibles. It starts with the cabin; marginally less intimate than did the 991’s, but comfortable and solid enough to reel off huge journeys in a single hit (slightly elevated tyre roar being the only demerit).

The 3-litre engine has that familiar flat-six timbre on startup, but leave the PDK in auto and that’s probably the last you’ll hear of it when you’re just ambling around, as the ‘box will quickly shuffle you to the highest gear possible. Prodding the button for manual changes soon becomes obligatory on anything other than local trips, so you can use just the lower four or five gears rather than all eight. Like this the PDK’s predictably excellent too - changes are instantaneous and smooth, with none of the artificial thump some systems deliver. 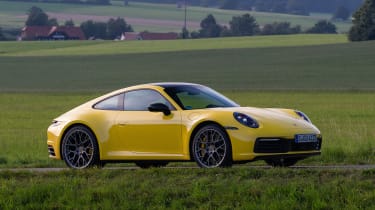 In this kind of driving, you might wonder whether you’d ever need any more performance from a 911. The six comes on boost thick, fast and early, with good throttle response and an engine note that’s as happy at the red line as it is at idle. The slightly characterless sound is a little disappointing though, and prodding the sports exhaust button by no means brings an improvement - its loud resonances border on the painful at certain revs.

The Carrera is as capable as the Carrera S in the corners, and if you’re reading between the lines, you’ll realise that means it needs the same commitment before it starts to feel like 911s of old.

Driven only briskly it feels like a shrunken Panamera rather than a dedicated sports car, but push the engine and chassis harder and some of those 911 qualities are unlocked. The body control and corner-exit traction are fantastic, and the steering begins to wake up as you send greater loads through the front tyres.

It always feels composed and agile too - it’s just a shame it doesn’t deliver a few more thrills at more accessible speeds. Perhaps steering clear of the upgraded wheels and wider tyres would unlock just a little more character.

The Carrera’s base price clocks in at £82,793, though we’ll shake the hand of any reader who ends up driving out of the dealership having paid no more, as it’s hilariously easy to end up with a Carrera for Carrera S money. With everything from an Alcantara steering wheel to over six grand’s worth of carbon-ceramic brakes, our test car fell on the wrong side of £100,000.

It’s a struggle to think of directly comparable rivals for the 911. Audi’s R8 fits the “everyday supercar” bill, but pricing starts at nearly £130,000 and its mid-engined supercar layout is quite a departure from the 911’s 2+2 setup. Other considerations are Aston Martin’s V8 Vantage at £120,900, and the £104,195 Mercedes-AMG GT. Both have the measure of the 911 for character, but for usability and price the Porsche still has the edge.