The best iteration of the Golf yet? 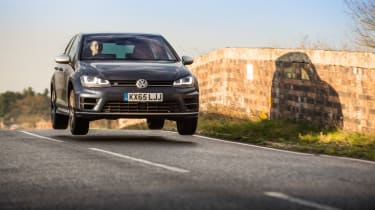 On paper, what is essentially a Golf GTI with more power and four-wheel drive doesn’t sound all that exciting yet, in the R, VW has made a genuinely rapid car with that rare knack of feeling totally secure and, at the same time, fantastically biddable, as if it were always working out the best way to extract the most pace from any given input on any given road.

Think of it as a Golf GTI with a reprogrammed ability map that comes into its own beyond 8/10ths, where the less powerful front-drive car would be starting to get distinctly ragged, and you’ll have a fair idea of the Golf R’s exceptional skill set. 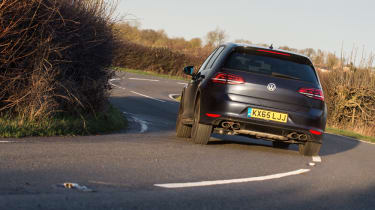 If it lacks the nth degree of hardcore conviction and precision that make the RS Megane such a sublime driving tool, it arguably more than compensates with a fully-rounded repertoire of practical everyday abilities as well as the sophistication, myriad refinements and build excellence synonymous with the Golf. A potent package in every sense.

> Performance and 0-60 time - Far quicker than a Golf GTI, with extra power and traction offsetting the increase in weight.

> Engine and gearbox - Four cylinders, a turbocharger and the option of either manual or dual-clutch transmissions. It's all-wheel drive too.

> Ride and handling - Belies the sometimes staid Golf image. Great to drive fast, even better to drive at its limit; always fun and engaging.

> MPG and running costs - Combined economy of around 40mpg makes the R a reasonably sensible purchase, enhanced by strong residuals.

> Interior and tech - Little to excite visually and it loses the GTI's neat tartan trim, but this is a cabin you'll never become irritated with. Comfortable, well-equipped and well-built.

> Design - Subtle but purposeful. Some may call it dull, but if you don't want to shout about performance than there are few better cars.

> Videos - Watch our collection of videos on the Golf R, from its launch, to its appearance in evo Car of the year 2014, to our Deadly Rivals battle with the Audi RS3. 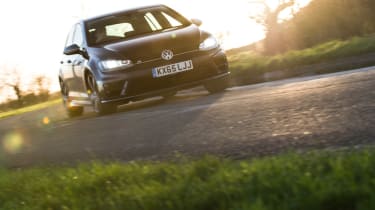 Attractive as the Golf R hatchback is, you might be tempted instead by the Golf R Estate, launched in 2015. It offers 605 litres of room with the seats up and a whopping 1620-litres with them folded flat. It loses few of the regular hatchback's abilities - with a 79kg weight gain it's only two tenths slower to 62mph, at 5.1sec, but it's handsome to behold and very practical. The only real problem is the lack of a manual gearbox option - though since so few opt for this in the hatch, it didn't make sense offering it in the estate.

That said, the Golf R costs nearly £3000 more than an equivalent GTI with its optional Performance Pack. It’s for you to decide, of course, but we think that with 60bhp extra, two more driven wheels and an extra heap of character, it justifies that money.

It undercuts the 316bhp, rear-drive BMW M140i and is more useable in mixed conditions, and it’s a better all-round package than the 271bhp Renault Megane 275 Trophy, though the French car still has the edge when it comes to absolute focus and purity.

One of its closest rivals in spec and image terms comes from in-house, via the Audi RS3. The Audi might be slightly classier, but the VW is cheaper and more engaging. You can watch our Audi RS3 and Golf R Deadly Rivals video here.

Closer still is the all-new Ford Focus RS. At £29,995 it undercuts the Golf R, and offers similar performance despite its extra horsepower. But the real bonus of the Ford is that it's simply great fun. While the Golf is hugely capable it's still more likely to impress you than enthrall you, but the huge front-end grip of the Ford, its willingness to send power to the rear wheels and its raucous engine all contribute to a highly entertaining package.

The Honda Civic Type R can't match the Ford's entertainment value, but it does have its own talents. If you're seriously considering a Golf R then the Civic's Fast and Furious styling may not appeal, but it's a characterful alternative that's a little more open in its desire to thrill than the Golf. Not as competent as an all-rounder either, but worth a look.