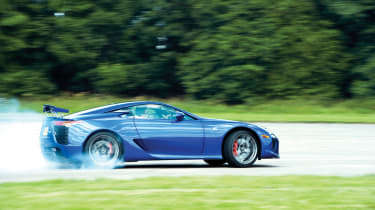 Nine years in development, the Lexus LFA dived straight in at the deep end. A no-holds-barred supercar with a £350,000 price tag, it isn’t swimming with dolphins but the sharpest-toothed predators from Ferrari, Porsche and Lamborghini, all of which cost at least £100K less.

The first shock is its performance. With a 0-60mph time of 3.6sec and a 202mph top speed it is certainly quick – but both figures are bettered by less extravagantly priced rivals. The LFA is about far more than the figures, though. The quality of the car’s construction and componentry is where the money seems to go. The bespoke, stratospherically high-revving normally aspirated 4.8-litre V10 in the nose is mated to a six-speed automated manual gearbox at the back, giving the LFA a near perfect 48/52 front/rear weight distribution.

Hi-tech lightweight construction is a given, its CFRP (carbonfibre-reinforced polymer) chassis and bodywork offering four times the strength of aluminium at a saving of 100 kilos and giving the 1480kg car a potent 379bhp/ton power-to-weight ratio – better than a Ferrari 599’s. Developed at the Nordschleife, its suspension is made mostly of aluminium to save further weight and the carbon-ceramic brakes shave even more from the unsprung mass.

But perhaps none of this really matters. From the futuristic kinetics of its sci-fi dashboard to its glass-shattering exhaust note at 9500rpm, the LFA looks, feels and sounds very special. And if the standard car wasn’t quite special enough, in 2011 Lexus add the Nürburgring Edition, with an extra 10bhp, subtle aerodynamic tweaks and a run of just 50.

Not the fastest supercar, maybe, but fast enough. And utterly absorbing. Indeed when evo tested it against the Ferrari 599 GTO, we found the LFA the more intoxicating of the two. 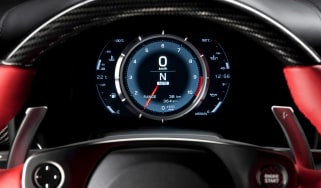 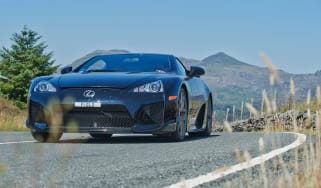