Our favourite cars of 2017 - the new cars we loved most

We covered thousands of miles in hundreds of cars but which were our standout machines of the last year?

2017 has been another year of remarkable new performance cars. Audi built a mini-Continental GT with its RS5, AMG went slightly bonkers with the GT R and perhaps even more so with the E63 S. Maybe the all out bonkers award should go to the Porsche 911 GT2 RS. Or perhaps Ferrari’s 812 Superfast. Or both. New Honda Civic Type-R? Yep, that’s a cracker too, as are the latest products to come out of the Lotus factory. Bugatti’s Chiron still makes us smile because of its pure theatre, a bit like Lamborghini’s Huracan Performante, which you can’t help but fall for, warts and all. But which were evo's favourites? 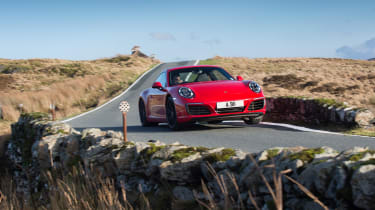 The Porsche 991.2 911 GT3 is an astounding piece of kit, as is the mind-scrambling McLaren 720S – either one deserves to walk off with the award of favourite. That Caterham 310R was a pretty special thing too. But perhaps my favourite was the entry-level 911 Carrera that I spent a day or so in. Its manual gearbox and small capacity engine meant you had to work to unleash its performance, while its handling felt more defiantly rear-engined than faster and more expensive models. Ultimately, it offered a glimpse of some of that 911 magic that has been lost in the pursuit of lap times. 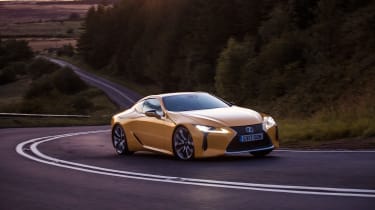 There was no shortage of modern metal that impressed me greatly. For sheer depth of talent the latest Porsche 718 Boxster and Cayman GTS are hard to ignore but it’s hard not to imagine they’d be even better with a naturally-aspirated ’six in the back, so in the end my pick is the Lexus LC500. No car has looked better in 2017, the naturally-aspirated V8 is glorious, and it feels much like a big GT86 to drive. I can’t wait to have another go in 2018. 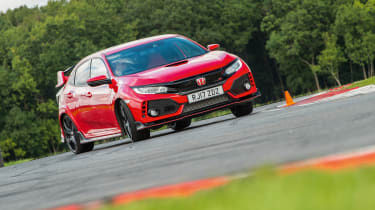 For me, it has to be the Honda Civic Type R. I vividly recall driving those first 200 metres in it and then almost stopping in bewilderment. I couldn't believe how polished and refined it was over the old model, and yet it’s one of those cars that keeps coming back for more, and revealing more of its abilities, the harder you push it. I think it’s a watershed moment for the hot hatch – a brilliant achievement.

There was one car launched this year that could, quite possibly, be all the car you ever need. The Mercedes-AMG E63 S Estate. It’s fast, really fast. It’s amazingly fun to drive on the road, it’s not too bad on track either; the four-wheel drive system adds traction but doesn’t destroy adjustability. The rear-wheel drive mode, called Drift Mode, might seem like a gimmick to appease traditionalists, but after one corner – smoke billowing from the rear tyres, the long wheelbase making the slide easy to balance and the power making it easy to maintain – the smile on your face confirms it’s an absolute necessity. Okay, you’ll be black flagged immediately on a trackday doing that, but it’ll be completely worth it. And, as it’s a big estate, it’s incredibly practical too. 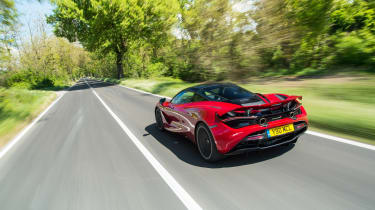 For me there’s one standout car – the McLaren 720S. To go from disappointing and way off the mark with the 12C to the bullseye striking brilliance of the 720S in just six years is a phenomenal feat. In the 720S McLaren has developed a supercar that delivers on every level in terms of performance, agility, ability, excitement and thrills. No matter your skill set you can explore the experiences only a supercar can deliver, drown in that speed, feel the force of its chassis’s capability and marvel at how it wants to engage you rather than scare you in everything it has to offer. Having said that… too much right foot in third gear or higher will certainly give you something to think about, especially if it’s anything less than dry under those Pirellis. That it’s also a better GT car than a Aston Martin DB11, as useable as a BMW M2 and quicker than a P1 means every journey in a 720S is pure adventure.