From Porsche 968 Club Sport Cayman S, we count down the 100 most inspiring cars to drive from the last 50 years. Will yours be on the list? 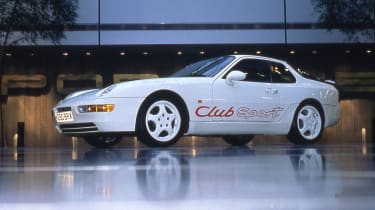 50 PORSCHE 968 CLUB SPORT The end of the line for Porsche’s enduring front-engined family. By this time, the 968 (formerly 944) had been honed to something approaching dynamic perfection and, in stripped-down Club Sport guise, it’s better still. If any transaxle Porsche deserves its place in the hall of fame, this is surely the one. Not as desirable as a 911, but there may never be a better handling Porsche. Layout: Front-engine, rear-drive Engine: In-line 4-cyl, 2990cc Power: 240bhp Top speed: 149mph 0-60: 6.1sec Years: 1993-95 49 PORSCHE CARRERA GT From the moment you depress the clutch pedal, slot first and feed in the power, you immediately sense its intensity, its focus. The V10 is so responsive to throttle inputs, you don’t so much drive the CGT as play it like an instrument. It jiggles over bumps, but when you ask everything of the front-end the distractions fade, leaving you with an explicit flow of information. Bites at the limit, mind… Layout: Mid-engine, rear-drive Engine: V10, 5733cc Power: 604bhp Top speed: 205mph 0-60: 3.8sec Years: 2004-06 48 HONDA NSX Provided you can get comfortable in the NSX (not guaranteed if you’re over six foot or object to having the steering wheel in your lap) you’re in for a good time. Perfectly reflecting the two sides of Honda’s character, it melds hardcore driving virtues with ease of use and impeccable engineering. The frenzied VTEC and brilliantly crisp dynamics more than offset the slightly inert electric power steering. Layout: Mid-engine, rear-drive Engine: V6, 3179cc Power: 276bhp Top speed: 168mph 0-60: 5.5sec Years: 1990-2005 47 NOBLE M400 Here representing all of the M12-generation Nobles, the M400 drives like a high-energy Esprit. Seismic power delivers a gale-force rush of boost from behind and yet even if deployed mid-corner it never threatens to understeer, the front end maintaining grip and sensitivity despite the forces acting on it. Amazingly friendly at the back given the midships engine location and pared-back, whip-crack chassis. Flawed driving position, but enough pace and ability to embarrass exotics. Layout: Mid-engine, rear-drive Engine: V6, 2968cc, twin-turbo Power: 425bhp Top speed: 185mph 0-60: 3.5sec Years: 2004-06 46 PORSCHE 911 TURBO The 911 Turbo has always been a special car in the 911 range, with a unique set of talents and characterisics. Representing the breed, we’ve selected the 993 version, which has almost all of the speed and ability of the later iterations, but with a shot more character and sex appeal. The real joy of the 993 Turbo is the astonishing reach of its ability; the relentless neck-twanging acceleration, the inimitably hungry and hollow exhaust note and the almost spookily communicative steering. And it remains one of the finest examples of precision engineering on four driven wheels. Peerless all-weather point-to-point ability. Formidable and beautiful, and still dropping jaws to the floor. Layout: Rear-engine, 4wd Engine: Flat-6, 3600cc Power: 408bhp Top speed: 180mph 0-60: 4.3sec Years: 1995-98 45 MERCEDES CLK63 BLACK Quite simply the most thrilling and involving Merc in years (and no, we haven’t forgotten the SLR McLaren). The Black is owner of one of the most playful and placeable rear ends ever. Just turn in and, when you’re ready, give the throttle a nudge. A tight LSD, super-stiff frame and taut suspension means an armful of oppo is yours for the taking. It’s pretty fine in a straight line, too, and can even be driven neatly and precisely. But not in the wet. Oh yes, and it’s got great Recaros, and sounds wicked too. Layout: Front-engine, rear-drive Engine: V8, 6208cc Power: 500bhp Top speed: 186mph 0-60: 4.2sec Years: 2007- 44 ASTON VANTAGE V12 We were beginning to doubt Aston had the know-how to deliver an absolutely solid-gold drivers’ car. And then along came the V12 Vantage. The small body, big engine combo is tempting enough, but it’s the way the V12V rewards so richly on so many levels – communicative steering, indulgent handing balance, feelful brakes – that makes it the most memorable Aston of the current generation. Layout: Front-engine, rear-drive Engine: V12, 5935cc Power: 510bhp Top speed: 190mph 0-60: 4.4sec Years: 2009- 43 TOYOTA MR2 ROADSTER Everything a Toyota isn’t (usually). Impractical, fluid and fun, it’s enormously playful and exploitable close to the limit without ever becoming intimidating. That’s chiefly because, at 975kg, it weighs bugger all, so 138bhp is adequate and the chassis has a lightness of touch that not even the mk2 MX-5 can match. Want to find out about mid-engine/rear-drive handling? The MR2 Roadster drives like a slightly more civilised Elise, and praise doesn’t come much higher than that. Layout: Mid-engine, rear-drive Engine: In-line 4-cyl, 1794cc Power: 138bhp Top speed: 130mph 0-60: 7.2sec Years: 2000-06 42 TVR GRIFFITH A big engine in a small, light car is always an exciting mix (any wheelspin on a wet road can be a little too exciting). In the dry and provided you’ve opted for the sensible 50 front/55 profile rear tyre option, it’s hugely entertaining, involving and fast. Front engine balance means you can indulge in primeval tyre-smoking power-slides out of roundabouts without too much trouble… Layout: Front-engine, rear-drive Engine: V8, 4988cc Power: 320bhp Top speed: 167mph 0-60: 4.8sec Years: 1993-2001 41 PORSCHE CAYMAN S Perhaps even more so than the Boxster, the Cayman is arguably the sweetest handling of all current Porsches if not the most beguiling or exciting. Sat centrally in the wheelbase, you’re perfectly placed to make the most of the mid-engined layout and charismatic, torque-rich flat-six engine. Sweet, sweet steering allied to a forgiving chassis and supple suspension make it hugely exploitable. The way it takes the sting out of rough roads has to be experienced to be believed. Layout: Mid-engine, rear-drive Engine: Flat-6, 3436cc Power: 315bhp Top speed: 172mph 0-60: 5.2sec Years: 2006-