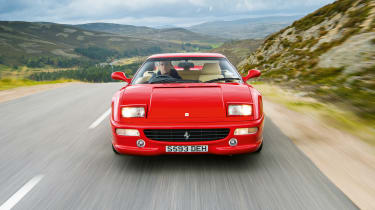 The first Ferrari we drove in evo was an F355 Berlinetta as part of our inaugural eCoty, held late in 1998. However, the first all-new Ferrari launched under our watch was the 360 Modena.

We were first invited to Maranello early in ’99 for a technical briefing on the car we would return to Italy to drive later that same year. Looking back, the 360 was a radical car for Ferrari: the first with an aluminium chassis and body, the first where aerodynamics were a major influence and the first to deliver genuine usability. If we’re being harsh, it was also the moment Ferraris ceased to be classically beautiful, but then the F355 was a tough act to follow.

The 360 was bigger than its predecessor, which masked the weight benefits of aluminium. Fortunately the larger motor (up from 3.5 to 3.6 litres) had increased power, from 374 to 394bhp, and a fatter spread of torque. It also had a drive-by-wire throttle, second-gen F1 paddleshift as an option and faster steering – an indication of the role technology would play in Ferrari’s quest for ultra-responsive dynamics.

Of course, there was a subsequent Spider version (in which we retraced the Mille Miglia route), but the 360 would also be the spark for a more explicit and exciting breed of track-biased Ferrari, the first of which being the delectable 360 Challenge Stradale.

This would serve as a blueprint for faster, fiercer creatures to come, its simple recipe of less weight (110kg lighter than the regular Modena and just 20kg more than the Challenge race car), wider rubber, lower, firmer suspension, a faster gearshift and a more potent engine focusing the performance of Ferrari’s mid-engined V8 model as never before.

It’s a mark of just how far things have come since that the Challenge Stradale’s bald performance figures – 0-62mph in 4.1sec, 183mph top whack – pale a little in the context of 2017, yet there remains something compelling about this car. A fact reflected in its appreciating value and covetable status amongst collectors and, inevitably, investors.

Five years after the 360 came the F430. Borrowing some styling cues (and optional carbon-ceramic brakes) from the Enzo and embracing Ferrari’s love and mastery of cutting-edge technologies, the leap in performance and urgency was far greater than that from 355 to 360. But then this was also in the midst of the Scuderia’s unprecedented dominance of F1 thanks to Messrs Brawn, Byrne and Schumacher.

The F430 continued the love affair with aerodynamics (50 per cent more downforce than the 360, no additional drag) and electronics, with the first appearance of the E-diff and steering wheel-mounted manettino switch, with which the driver could ramp-up the rate of response while relaxing the intervention thresholds of the TC systems.

The 483bhp engine was a big step. Not least because this ‘all-new’ 4.3-litre V8 was actually a flat-plane-crank derivative of the F136 unit first seen in 4.2-litre Maserati form. In the F430 it had 23 per cent more power and 25 per cent more torque, the result being a series-production model significantly faster and more expressive than the special-series 360 CS. 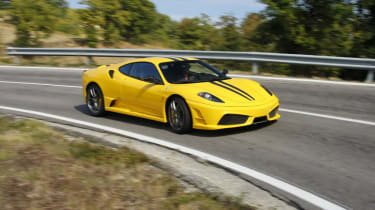 This seemingly exponential rate of development continued with the 430 Scuderia. Power had now breached the 500bhp mark, putting this scalpel-sharp machine firmly into V12 territory and well ahead of that iconic V8 Ferrari road-racer, the F40. Despite the technology, the Scuderia could be wild, but only when poked with a stick. For the most part it traded on precision and response. Oh, and noise, which was blood-curdling at high revs.

By now Ferrari had really hit its stride. With massive profits came investment in new technologies, and with it unprecedented product development. The zenith, at least so far as the naturally aspirated V8 was concerned, came in the insect-like form of the 458 and 458 Speciale. With these cars you really got the impression Ferrari wanted to make a statement – to put Maranello on a pedestal courtesy of arguably the finest non-turbo road-car engine ever made, combined with the most sophisticated electronics. Unsurprisingly the results were electrifying. 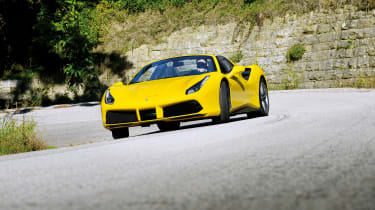 Normally when you make an engine bigger you also make it lazier, yet Ferrari managed to build a 4.5-litre V8 that revved to 9000rpm without resorting to titanium internals. It did the numbers that matter – 562bhp at the limiter, 398lb ft at 6000rpm – and claimed to be cleaner, too. A move from a single-clutch transmission to DCT (and the abandonment of a manual option) led to even quicker shift times, which helped the 458 hit 62mph in just 3.4sec. Top speed was 202mph. As for the 458 Speciale, it remains possibly the car that exemplifies the modern Ferrari.

What of the future? Well, it’s already here in the shape of the 661bhp 488 GTB. After such a run of increasingly inspirational V8s, turbocharging was something to fear, yet Ferrari still leads the way for throttle response. The overall improvements are still technology-led, but there’s a lightness of touch about its application that keeps the driver at the centre of this relentless quest for speed – something that’s set to continue with the new ‘super’ 488 later this year.