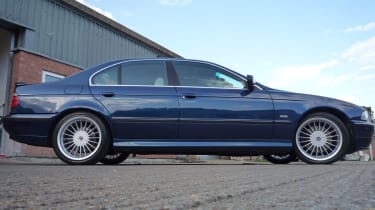 The Alpina’s mileage may not have increased much this month and, no, we haven’t yet had it converted to run on LPG, but it’s been a busy few weeks for our latest project car nevertheless.

When we bought our bargain big hitter for just £6800 it was close to needing an MoT, and that’s one thing we’ve been able to cross off the to-do list this month. Impressively, all it required for its ticket was a repair to a large chip in the windscreen, which was something I’d have sorted anyway as the rest of the bodywork is now in perfect condition, meaning the cracked glass was the final imperfection that needed to be smoothed away.

You see, before the boys at Paragon in Northampton had it up on their ramps, S36 ETV had been treated to a Gtechniq ‘nanoscopic crystal lacquer paint treatment’ session, and the results have proved to be as impressive as the name. Basically, it’s a new coating system that forms a permanent thin film over painted surfaces, and it works so effectively that the Subaru WRC team have their rally cars coated in it, not only to give them a high-gloss finish on the start ramp but also to stop the mud sticking to the bodywork, adding weight and hiding sponsors’ logos.

To do the job properly on a car approaching the 100,000-mile mark required a little more preparation work, though, so the crew at Herts-based Gtechniq (www.gtechniq.com) first corrected all the paint chips, dents and dimples and organised for the wheels to be refurbished by Max Powder of Hemel Hempstead (www.maxpowderalloys.co.uk).

The result is quite simply exceptional; I don’t believe the car could have looked better when it rolled off the production line a decade ago. The trick coating has also been applied to the wheels to help keep the dirt off – vital when they look as good as ours do now – while, inside, the leather seats have also been cleaned and protected.

So good are the results that we were almost tempted to enter the super shiny Alpina in a few concours competitions, but unfortunately for S36 the pampering’s now over. The hard graft starts here. We’ve heard of an LPG converter who specialises in Alpinas, so we’re already booked in to get the job done in the next couple of weeks. Stay tuned for all the details.