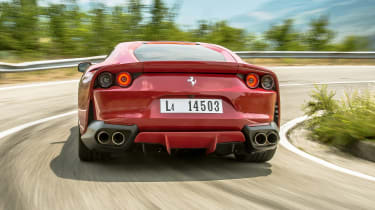 When it came to the V12 cars, Ferrari had implemented the big changes a few years before evo came to be. We’re now used to Maranello’s big-banger GTs having their V12s sitting well back in the nose rather than behind the seats, but even when the 575M Maranello was introduced in 2002, it still felt odd not to have a flat-12, Testarossa-shaped flagship for the series-production range.

The 550 of 1996 was a mellow machine, and the 575 continued that vibe, albeit with more power (508 versus 478bhp) and the option of an F1 paddleshift gearbox. The early cars proved to be considerably quicker than the 550, but also a bit at sea damping-wise. There simply wasn’t enough support, so the 575 tended to scrape its belly through big compressions.

The subsequent Fiorano Handling Pack addressed the issues and the 575M belatedly found its feet. We weren’t fans of the F1 ’box – though more potent, the 575’s demeanour still better suited a stick – but things would start to change with the 575M HGTC. This car brought some aggression to Ferrari’s V12 proposition. It was great to drive and eye-wateringly expensive, but nothing compared with what was to come.

The 599 GTB Fiorano of 2006 was a bruiser of a car. One powered by a 611bhp derivative of the Enzo’s V12 and mated to what at the time was the best paddleshift ’box around. Then there were the newfangled magnetic dampers and those aero buttresses that formed the C-pillars. This looked and felt like more of a leap than a step – 21st-century thinking applied to a recipe that could be traced back to the very origins of Ferrari.

I can remember driving Harry Metcalfe’s 550 over the Alps to Italy, where we then compared it with the new car. The older car was wonderful, but the gulf in performance was shocking. This was an altogether different kind of Ferrari GT. One that could eat miles, but one that did so with urgency and aggression.

It stands to reason that Ferrari’s V12 GTs followed the same trajectory as its mid-engined V8s, but the effect somehow seemed more shocking. A case in point was the 661bhp 599 GTO of 2011. Not for the faint of heart, it signalled a shift in strategy and trickle-down of technology from the XX customer programme.

I still struggle to get my head around the F12. Launched in 2012, it was a downsized 599 with upsized performance. Its pace was truly explosive, as you’d expect from something with 730bhp on tap. Top speed? 211mph. 0-100mph? 6.5sec. Dynamics? Well, if it wasn’t for the electronics that tame its inner dervish, the F12 would have a widowmaker reputation to put the F40 in the shade.

And yet, despite being far faster and wilder than it has any right (or need) to be, if you could summon the self-restraint, the F12 would happily grind through mind-numbing London traffic without complaint. That juxtaposition and breadth of ability remains one of this century’s greatest automotive magic tricks.

Like the GTO did for the 599, the 769bhp ‘tdf’ of 2016 revealed a spikier, edgier side to the F12. Rare and raucous, it was a heart-pounding demonstration of what Ferrari can do when it pulls out the stops. 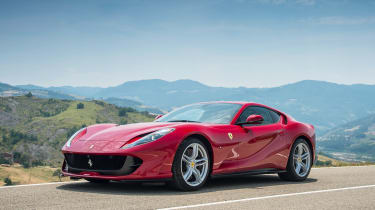 It’s too soon to say where the new 812 Superfast (driven in evo 238) fits into the grand scheme of things, but there’s no question it takes the front- engined V12 into even thinner air. A 6.5-litre V12 has no right to rev to 8900rpm, yet the 812’s 789bhp motor romps to the red line. This stratospheric performance is delivered by technology that endows this 1630kg machine with the agility that was once the preserve of far more explicit, one-dimensional supercars. If this is indeed the last naturally aspirated V12 Ferrari GT there could be no better sign-off.