The new Evo X is a great car, but if you want something a little more hardcore, you need the RS version... 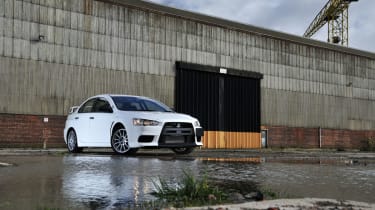 Natural order in the supercar universe is looking a little busted right now. Oh, the Veyrons, Zondas and Enzos are safe enough for the present, but further down the ranks there’s disruption and confusion.

You see, it always worked like this. The establishment set the standards. Whether it was a Porsche 911 Turbo, a Ferrari F430, a Lamborghini Gallardo or, latterly, an Audi R8, the high-water marks would inevitably have the name of a German or Italian supercar (or an Italian supercar with German engineering) chalked up beside them. Considerably more affordable, would-be giant killers from Japan – typically Skylines, Scoobies and Evos – could have a legitimate pop and get crowd-pleasingly close to embarrassing royalty on the twisty stuff. But, ultimately, they’d fall back to earth for any number of reasons, not least, in the case of the Impreza and Evo, the sort of one-dimensional banzai personality moulded by the homologation requirements of the World Rally Championship.

But all that has changed. The car to beat now is the only Nissan that comes remotely close to warranting the description ‘frankly awesome’: the GT-R. As far as the giants of supercardom are concerned, there’s no more ‘would be’ about it. Dull thuds have been reverberating across the globe. They’re the sound of once invincible reputations hitting the deck. It’s an interesting new reality for the Evo X to be born into.

While no longer pressure-formed in the WRC crucible, the tenth-generation Evo has a legend to uphold and, but for the advent of the GT-R, supercar-baiting might have remained the juiciest part of the remit. Given the disarmingly dull, tin-box styling of previous-generation Evos, no car has ever pulled it off to greater effect. But the psychological focus has shifted now that the GT-R has raised the art of supercar embarrassment to that of complete humiliation. The long-threatened breakthrough has been made, and by a car forged more or less from the same turbo-techno mindset as the Mitsubishi. So it seems there are two options left for the Evo X – sidekick or the car that eclipsed the GT-R as an A to B machine for a little less than half the money.

As is always the case with the Evo, you can never tell how good it might be straight out of the box. While early drives in the fully equipped GSR-spec model have suggested a deeply talented continuation of the bloodline, we also know that it’s far from the statement that will reveal the car’s true ability, something that always emerges later; evolution might have its ‘hard points’, but it never rests. Buying a X from a UK Mitsubishi dealer might not provide the definitive answer, either. You’ll be able to choose the standard 290bhp FQ300 Evo at £27,499 or a range of incrementally more muscular FQ models performance fettled by HKS, peaking with the FQ360 at £35,499. That car, we have no doubt, will be quite something, if still some way off the X’s best game.

A grey, wind-lashed morning in Belfast feels a lot more like it, though, because this is where I get to rendezvous with the first stripped-out, lightweight Evo X RS – nominally available only in Japan – to hit the UK. The RS does without the paddle-shift and super-trick chassis electronics in favour of a five-speed manual and good old mechanical diffs, while jettisoning all unnecessary frippery, including the radio and powered seats. Off the shelf it comes with 16in wheels and no bootlid spoiler, but this one has the optional Tarmac Pack, which comprises 18-inch wheels, Brembo brakes, spoiler and water injection. Moreover, our friends in the emerald isle, Momentum Motor Sport, have also laid on an uber hardcore Evo VIII MR RS to keep the new hotness honest. And that comes with a smattering of resolve-hardening extras, too: Recaros, Brembos,17-inch wheels, five-speed box, twin-plate clutch and RS plate rear diff. Pretty much Group N spec, then. Now that’s worth missing breakfast for.

When Richard Meaden drove the fully-loaded GSR with its twin-clutch TC SST paddle transmission in Japan last year (111), he was only too aware that it wasn’t the model that Evo or, indeed, evo diehards would go for and that UK roads would chuck a load of new challenges at the chassis. It now possessed near-telepathic abilities when it came to prescribing the precise dosages of torque and braking to each wheel that would allow you ride the limit with impunity. In the context of the extra weight – a rather portly 1540kg, some 140 kilos more than the Evo IX – and the base tune engine, it made for a more sophisticated and less visceral driving experience than that delivered by older, hyperactive editions of the Evo.

The rugged roads of County Antrim – miraculously light on Gatsos and long on tempting straights – would have provided a more mixed and insightful test if the workout they’re currently giving the 320bhp Evo VIII MR RS is anything to go by. What it isn’t is comfortable or easy. It’s an AK47 of a car: hardly pretty, with little tactile subtlety, but devastatingly effective. Getting the best from it demands a brutally single-minded approach. If you’re not on it, you’re wasting its time as well as yours and, in that respect, it’s no more three-dimensional than a game of Gran Turismo. But the harder you drive the VIII, the more it gestures to you: bring it on. The point at which it cries ‘enough’ is purely imaginary; in reality, your nerve will crumble first. Adrenalin junkies need look no further.

Nor fans of the Very Turbocharged Engine. Throttle response is sharp but dominated by the turbo’s frenetic workrate. Lift off while it’s on a charge and you’re treated to a clumsy lurch. Give it the lot, though, and the rapidly rising pitch of the engine note is expressed as what can only be described, in human terms, as a diaphragm-busting exhalation of air through pursed lips, rather like that of a weightlifter in the eye-popping, vein-bulging, purple-face phase of a 10 kilo-too-heavy lift.

But, Christ, it delivers. I mentioned visceral. Toe down, this thing has enough head-back thrust to make granite perspire. Sledgehammer torque, too, and it hauls like crazy at the top with a more than passable rally-car vibe. All the tactile cues have an authentic feel, from the hair-splicingly direct steering to the hard ride, from the brickwall anchors to the ultra-grippy Yokohama rubber. Even at quite eye-watering speeds, the chassis remains unerringly faithful and forgiving. And you’ll want to keep your eyes on the road: the ultra-plain and unerringly plasticky cabin offers no distraction whatsoever.

By the standards of the VIII, the X’s cabin is almost charismatic. By the standards of, say, an Audi S3, it has all the charm and textural subtlety of a disposable plastic cup, but it is well put together and refreshingly unpretentious.

The lightweight RS undoubtedly restores an edge to the X’s acceleration missing in the GSR, but it still takes a pasting from the VIII. It’s the sort of difference that’s significant enough to notice on the road, especially at the top end. That said, serious action in the X RS starts earlier and its mid-range rush feels just as massive. Its engine feels as if it has large lungs but the VIII’s has a harder, hungrier demeanour.

Despite the shortfall, the X can still summon frankly gobsmacking overtaking shove and has so much torque it’s seldom necessary to slot anything lower than third. Big Time brakes, too, with massive retardation on call and super-firm, top-of-the-pedal feel – not quite as sensitive as the VIII’s on initial application and therefore easier to modulate, especially when heeling and toeing. They inspire heaps of confidence despite lacking ABS. The RS appears to have all the stability and grip in the world. Maybe unnecessarily so. The VIII’s 320bhp gives its chassis more of a workout, and all to the good if you value a sense of involvement. Even so, the X strikes a good balance between entertainment and safety.

It really responds to being taken by the scruff, but you’re unlikely to have a riot doing it. What the X RS does it does brilliantly but it hardly feels like a raw road-racer. Yes, supercar performance meets advanced all-drive grip and traction. Very little is quicker A to B but, right now, the Nissan GT-R almost certainly is. Who knows what manner of bad craziness lies in store for the Evo X, but the RS should be regarded as a mere starting point. It’s far less all-or-nothing than previous Evos and I have a feeling the search for hidden depths won’t be in vain.