The original was proof that everyday cars can be fun - so can the mk2 uphold the tradition? 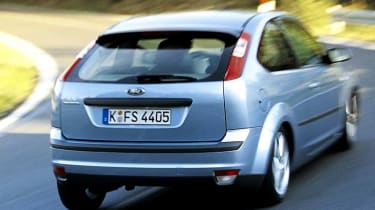 Seldom is there a weight of expectation at the launch of a new car quite like this. Ford's brilliant Focus may not exude the glamour of a supercar but since its launch in '98 it has encompassed all that can be great about a mid-sized hatch; it has shown that raw speed isn't the most important ingredient in a real driver's car. It set new standards in everything from style to packaging. And its most celebrated quality of all was its blinding chassis. The mk2 Focus needs to be exceptional if it's to eclipse its illustrious predecessor in our hearts and minds.

So, what's new? In one sense, everything: the Focus is substantially bigger in every dimension including the wheelbase and track. Inside it's out with the slightly cheap-feeling hard plastics and boldly carved facia, in with a very Germanic and slightly generic look. While the quality is a match for the VW Golf the conservatism is disappointing; the Focus was once the radical torchbearer for Ford's 'New Edge' design language. 'Bland-wedge' more aptly describes the new car, although the three-door looks slightly better in the metal. It's a shame that the Focus has lost its visual confidence, particularly when the mk5 Golf plays so safe.

Fortunately Ford hasn't thrown the baby out with the bathwater and underneath the new body the basic chassis architecture remains the same. At the front it retains the familiar MacPherson struts, attached via a bigger footprint to a stiffer sub-frame, and at the rear is an improved version of the fully independent Control Blade suspension. Ford claims that new bushes control lateral body movement even more efficiently, whilst offering more longitudinal pliancy; this improves ride comfort and cuts road noise. The most significant change under the skin is the adoption of hybrid electric-hydraulic power-assisted steering.

There are five engine options at launch, three petrol (79bhp 1.4-litre, 99bhp 1.6-litre, 143bhp 2-litre) and two diesel (108bhp 1.6-litre, 134bhp 2-litre) and five trim levels (Ambience, Trend, Sport, Ghia and Titanium). Ford has arranged a three-door 2-litre Zetec for us to try first. With 10mm lower suspension and 17in alloys shod with 205/50 Continental SportContacts it's the most evo-orientated model in the range. It's hardly a firecracker with a 0-62mph time of 9.2sec and a top speed of 127mph, but it shades the 2-litre Duratorq TDCi on paper (9.3sec, 125mph) and for now is the performance flagship.

Immediately you'll notice that the driving position is brilliant and easily tailored thanks to comprehensive seat and steering column adjustments, the steering wheel feels great to hold and snicking the five-speed 'box (the diesel gets a six-speeder) into first shows that the slightly loose shift of the mk1 has been replaced with tight definition and a nice economy of movement.

Feed in the power gently through the perfectly weighted clutch and within just a few hundred yards the Focus feels right. The ride is tightly controlled yet supple, the front wheels respond quickly and accurately to steering inputs, there's little body roll and the Focus feels keen, agile and light on its feet.

Work the car harder and it flows beautifully. That electro-hydraulic steering system is excellent, better than a Golf's and miles more communicative than an Astra's; its natural weighting encourages you to soon start using the chassis' breadth of ability. It grips harder, corners flatter and is more composed than its still class-leading predecessor, yet also feels more sophisticated thanks to its quiet ride, lack of steering kickback, that great 'box and more powerful brakes. The 2-litre engine is pretty feisty, too. It spins smoothly up to around 5000rpm and then has a slight resonance as you close in on the 6800rpm limiter, which just adds to the sporty feel of the car. Ford seems to have done it again.

Can you sense I'm building up to a 'but'? Indulge me - this is an indulgent magazine, after all. And it's when you're being indulgent and asking the Focus to do things beyond the call of duty for a mainstream hatch, that it fails to recreate the sheer joie de vivre of the original Focus. Blame that increased body control, or Ford's decision that the Focus needed to 'grow up', but there's no escaping that the new Focus isn't as throttle-steerable as it was.

Over-commit to a turn and it'll help you out by locking its nose back on to line with a throttle lift, but it takes much more coaxing to really bring the rear of the car into play. Now, I'll concede that not many Focus owners will be too worried about a lack of lift-off oversteer, but this ultimate control also means that in less extreme situations the Focus feels less malleable, less alert and just a bit less alive. Hardly damning criticism and not enough for the new Focus to be judged anything other than a success, yet reason enough for evo readers to be ever so slightly saddened.