We’ve perused the used car pages so you don’t have to. Here’s what caught evo’s fancy this week 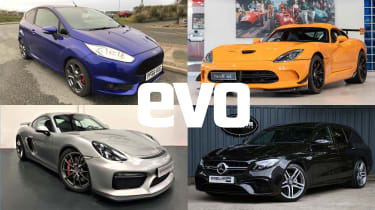 The used car market can be a fickle and intimidating place to find your dream performance motor, but dig deep enough and there’s plenty to take even the most picky buyer’s fancy. Britain’s second-hand market is full of fascinating used buys that are often available for a fraction of their as-new price.

There’s also the added fun and excitement of finding something just that little bit special, in both rarity and the capability they can provide for the money. As such we feel it is our duty to do some of the hard work for you, digging out our favourite second-hand buys every week.

Below are our best used car spots of the week... 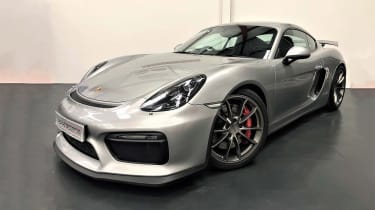 The Porsche Cayman GT4 is one of the greatest sports cars of recent years, with three pedals, a glorious 3.8-litre naturally-aspirated flat-six and a chassis to match. Though both iterations have received criticism for their long gearing, the rest of the package certainly makes up for it. In 981-form, 385bhp and 310lb ft of torque is sent to the rear for a 4.4sec 0-62mph time and 183mph top speed.

While values of GT4s have typically remained incredibly strong, prices are now starting to soften, with this five year and 34,000 miles GT Silver example on sale for £59,450. With only one former keeper on its books and a full Porsche main dealer service history, this GT4 is only a few thousand pounds more than an Alpine A110S or Toyota Supra, and we know which we’d choose… 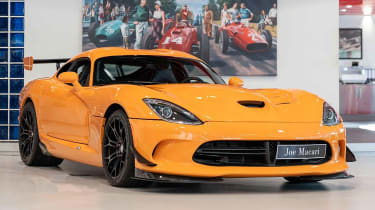 Production of the final Dodge Viper came to end in 2017, and although it might not be particularly well suited to tight UK roads, there’s no denying its American charm. Powered by an 8.4-litre naturally-aspirated V10, the final Viper produced 640bhp and 600lb ft of torque, sending it to the rear wheels for a sub-3.5sec 0-62mph time and top speed of around 200mph.

Though only a handful have been imported to the UK, this track-oriented, limited-run V10 supercar is on the market for £119,950. Having covered just 2360 miles since it left the factory, it’s finished in unique Time Attack orange, with a handful of carbonfibre extras found inside and out. 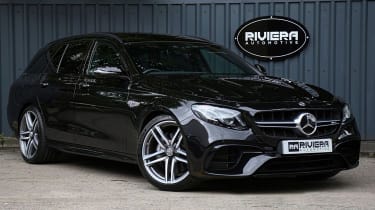 The German performance estate is perhaps the ultimate family car, with enough room for daily chores, impressive refinement on the motorway, and blistering performance should you need it. The latest E63 Estate is no different, with its 4-litre twin-turbocharged V8 sending 564bhp and 553lb ft of torque to all four wheels for a 3.6sec 0-62mph time and 155mph top speed in non-S form.

Add some options on a new car and you’ll find yourself edging close to the £100,000 mark, but this Obsidian Black 2018 example is already on the market for under £50,000. With only 25,000 miles on the odometer, it also comes fitted with a panoramic sunroof, uprated Burmester speakers and more. 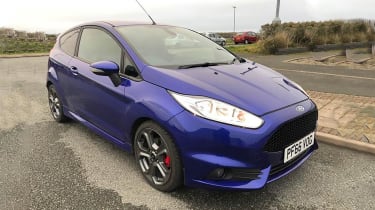 Modern hot hatches don’t get much better than the Fiesta ST. The current Mk8 car boasts more power and capability than before, but its predecessor is still an outstanding driver’s car. Powered by a zingy 1.6-litre turbocharged four-pot with 182bhp and 177lb ft of torque, the ST can sprint to 0-62mph 6.9sec and go on to a 139mph top speed.

Finished in the trademark ST Spirit Blue, this particular car has covered 32,259 miles in its four-year life, and can be had for a fraction of the price of a used Mk8. 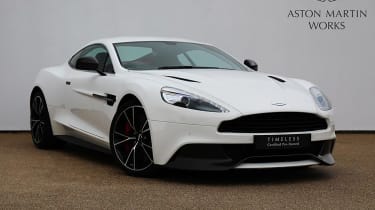 The second-generation Aston Martin Vanquish arrived in 2012 as a replacement for the uber-cool DBS, boasting high-tech carbon fibre bodywork and an increase in power and agility. Early cars such as this were let down by the six-speed ZF torque-converter auto, but given the money you’ll pay for one today, it’s something some may be willing to put up with...

Powered by a 565bhp 5.9-litre V12, this 24,800-mile Stratus White car is up for sale at none other than Aston Martin Works Newport Pagnell. Coming with a Chancellor red leather interior, a Bang & Olufsen sound system and the optional Satin Chrome Jewellery Pack, it can be had for over £115,000 less than it was new. 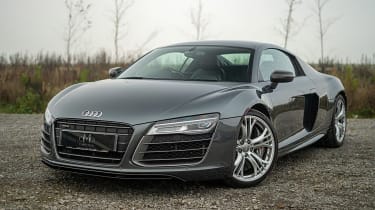 The manual gearbox in its entirety is slowly but surely fading away, with the vast majority of today’s performance cars opting for a two-pedal setup. Step into the classifieds though, and you’ll find some treasures… Mating a 542bhp 5.2-litre V10 to a glorious snickety six-speed manual, the previous-generation R8 V10 Plus is perhaps the best way to get your manual supercar fix.

Though you’d expect such a rare machine to be sky-high in terms of value, this 42,121-mile Daytona grey car is on the market for less than the current six-cylinder RS5. It also comes equipped with an optional Bang & Olufsen sound system, extended Nappa leather and tasteful R8 GT wheels in silver. 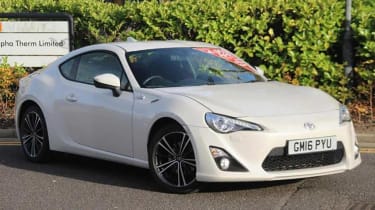 The Toyota GT86 and its Subaru sibling sit alongside the Mazda MX-5 as one of the most affordable ways into a rear-drive performance car. Powered by a 2-litre boxer four-pot, 197bhp and 151lb ft of torque help it reach 62mph in a modest 7.6sec, going on to 140mph flat-out. Though the latest iteration has been previewed through the 2022 BRZ, first-generation cars can now be had at very attractive discounts... 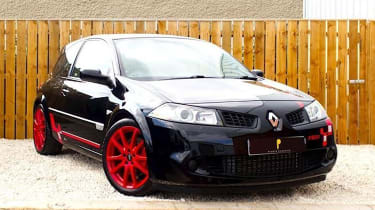 The R26.R is undoubtedly one of greatest hot hatches of all time, even over a decade since its release. Its spiritual successor, the Megane RS Trophy-R, is a highly capable machine, but costing the price of a Porsche Cayman GT4 with all options ticked, it challenges the very notions hot hatchbacks appeal to, while still lacking the R26.R’s nuance on-road.

Under the bonnet is a 2-litre turbocharged four-pot producing 230bhp and 229lb ft of torque – this is enough for a healthy 5.9sec 0-62mph time, largely thanks to an impressive 123kg drop in kerb weight over the ordinary R26.

Finished in black with striking red highlights, this car comes fitted with new Michelin Pilot Sport Cup 2 tyres and is equipped with the standard roll cage, harnesses and carbonfibre bucket seats. The status of the R26.R is beginning to gain steam, but even so, this 42,516-mile car can be had for a reasonable £21,500, under half the cost of the base-level Megane RS Trophy-R. 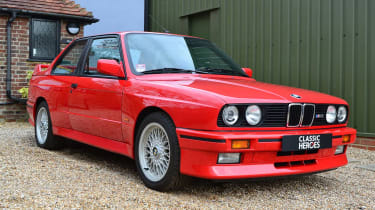 Originally built as a Group A homologation special, the E30 was the first and, in the eyes of many, finest M3 ever. Though it lacked the marque’s trademark straight-six, its 2.3-litre S14 four-cylinder was utilised for weight savings and a higher redline, with 200bhp sent to the rear in standard form. But it was the E30 M3’s dynamics on the road that was like little else, which you can read all about in issue 279.

Fitted with the Evolution's more desirable 16-inch wheels, this example is finished in the factory Brilliant Red paint and comes with Electronic Damper Control. Despite having 87,613 miles on the clock, all the panels are original items, and has been stored in a heated garage and BMW servicing for peace of mind. The E30 special editions receive more attention, but for under £60,000 this standard M3 is still a force of nature for any driving enthusiast. 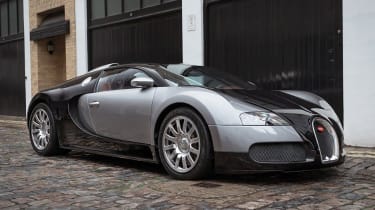 The Bugatti Veyron was a real Concorde moment when it was revealed, and although the recent Bolide boasts unrivalled performance figures, it remains one mighty performer even 15 years on. Powered by the same W16 as the track-only concept, it’s capable of a 2.46sec 0-62mph time and a 253mph top speed – figures most performance cars still can’t match today.

That Bolide might well be stealing all the headline, but that same W16 powertrain could be yours in this tastefully-specced, 15,535-mile Veyron for under the £1,000,000 mark. It’s still not cheap, but given the Veyron’s legendary status in the automotive history books, it might just be a worthy investment. 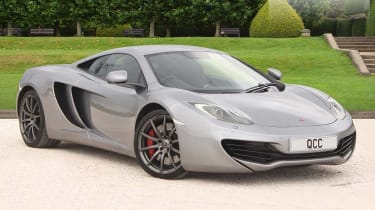 The MP4-12C was a mighty first attempt at a modern-day supercar by McLaren Automotive, with its performance still holding up now, over a decade since its reveal. At its core is a flat-plane crank twin-turbocharged V8, with this example having the powertrain update that  sent an impressive 616bhp and 443lb ft of torque to the rear for a 3.1sec 0-62mph time and 207mph top speed.

This Titanium silver car is on the market for a rather ridiculous £69,950, only 25,000 miles after it rolled off the production line. It’s not short on options either with the Stealth pack, carbonfibre interior upgrade, Meridian sound system and a full McLaren service history all coming as part of the package. 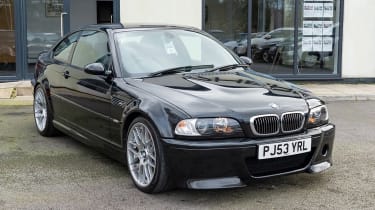 The E46 M3 CSL needs no introduction, being widely regarded as one of the best M cars ever to grace our tarmac. One of the greatest induction sounds you’ll find in a road car comes courtesy of its 3.2-litre naturally-aspirated S54 straight-six, sending 356bhp and 269lb ft to the rear wheels for a 5.2sec 0-62mph sprint and 155mph top speed.

The CSL is fast becoming a modern classic, and used prices are reflecting this - the very finest examples will set you back close to £100,000. If you’d like to get your hands on one before prices climb too high, however, this 72,000-mile car might be for you. Finished in Black Sapphire with a grey Alcantara interior, it comes with a full service history as one would hope for something so dynamically focused. For an additional £3500, you could even have it converted to a manual by Everything M3s...