Fancy an Audi S4 or BMW 335i? How about an Infiniti instead? Peter Tomalin gets to grips with the 4wd G37x. 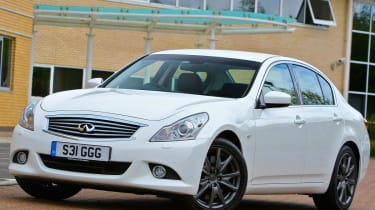 Infiniti is Nissan’s upmarket sub-brand, like Lexus is to Toyota. Recently updated, the G37 is competing for a slice of the European compact saloon car market. This is the four-wheel-drive ‘x’ version (a rear-drive model is also available) in lavishly equipped GT Premium spec, priced at £38,820.

The 3.7-litre V6 engine is basically the same one that’s in the 370Z coupe, slightly detuned at 316bhp. The transmission is a seven-speed automatic with paddle-shift manual mode, mated to Nissan’s ATTESSA E-TS four-wheel drive system, which in a previous life was employed to good effect on the R34 GT-R. The system naturally has a rearward bias but can direct up to 50 per cent of torque to the front in low-grip conditions.

You have to work the engine pretty hard to get the best from it, but the slightly raw-sounding V6 has bags of character and performance is brisk, with 0-60 in a claimed 6sec dead. It doesn’t have the thump of Audi’s supercharged S4 or the reach of BMW’s turbocharged 335i, but it’s not far off either.

Its weakest point is the seven-speed Auto gearbox. It’s fine wafting around, but when you really want it to snap through changes using the paddle-shifters it’s just a little soft and slow compared with a double-clutch gearbox or even the best autos.

The chassis is thoroughly competent and surprisingly positive. The ride is excellent over a variety of surfaces and it keeps its composure well when hustled. The steering has a slightly artificial weightiness and isn’t overflowing with feel, but it’s positive and accurate. The G37 doesn’t feel quite as agile or playful as an S4 or a 335i – in the dry it grips hard, eventually edging into understeer - but it’s still a surprisingly agreeable companion on a cross-country run.

The basic price looks steep compared with an S4 and 335i, though by the time you bring either of the German cars up to the same equipment levels you’d be paying considerably more. Purely in terms of what if offers and how it drives, it’s certainly competitive. The sticking point for many potential buyers will be the image, or lack of it. They might quickly tire of being asked, ‘What is it?’ or worse,‘Is this the new Lexus?’