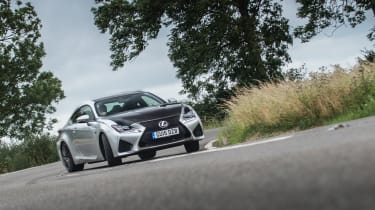 We last drove the Lexus RC F in evo 206, pitching it against the BMW M4 and Audi RS5. What it lacked in immediacy it clawed back in compliancy and traction, and a distinctly non-German character that may be refreshing for some buyers.

Little changes in ‘Carbon’ spec but you do get those distinctive weight-saving carbonfibre panels and some tasty additions to the standard specification list.

Unchanged is the engine. With no turbocharger the Lexus will always lack the brawn of its now-turbocharged rivals, but those not convinced by forced induction will appreciate the 4969cc capacity and its eight naturally-aspirated cylinders.

All this is sent through an eight-speed automatic transmission and a torque-vectoring limited-slip differential, with a 4.5-second 0-62mph sprint and 168mph top speed the results.

As you can plainly see, the RC F Carbon features an exposed carbon bonnet, roof and tailgate spoiler. Together they save around 15kg, dropping the kerb weight to 1765kg. For the record, I was deeply uneasy about the exposed carbon when I first saw the car, but by the time it went back I rather liked it…

This range-topper costs £8000 more than the stardard RC F, but it also gets that limited-slip diff as standard, plus a thumping Mark Levinson hi-fi system, heated Alcantara seats and a new design for its alloy wheels. 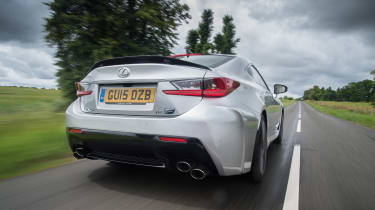 Despite the way it looks, there remains something of the reluctant sports car about the RC F. Perhaps it’s a symptom of modern motoring that the milder of the multi-mode driving dynamics systems soften things to a frustrating degree, but if you skip Eco and Normal modes and instead treat Sport and Sport+ as your default settings, the RC F feels far more energised and enthusiastic.

Without forced induction the V8 doesn’t have the instant, tyre-fizzing strength of an AMG Merc, so you have to be prepared to work through the eight-speed auto ’box. The extra weight doesn’t help at lower revs, but when it’s working hard the engine sounds mighty. It’s also smooth as silk. The transmission isn’t as immediate as the best double-clutch offerings, but unless you’re absolutely giving it everything, the shifts rarely get in the way of your enjoyment.

Damping-wise it rides firmly enough to never let you forget you’re in a sporting car, and there’s control and great stability. Traction is strong – no doubt thanks to the car’s mass and lack of instant turbocharged torque – and the balance is reassuringly neutral. The RC F is not as aggressive as its rivals from BMW or AMG, but you can still take months off the life of the rear tyres through tighter corners should you wish.

Ultimately it’s not as rapid point-to-point as the M4, but this is still a near-170mph car that’ll crack 62mph in 4.5sec. In the real world that’s more than fast enough.

Both BMW’s M4 and Audi’s RS5 provide tempting options for buyers not convinced by the RC F’s ‘Fast and the Furious’ styling package. Both are less powerful on paper, but only the Audi shares Lexus’s naturally-aspirated ethos, with 444bhp from its 5-litre V8. The Audi also adds a pair of driven wheels, while both Germans cost less to buy than the Lexus.

The arrival of Mercedes-AMG’s new C 63 S Coupe is imminent, and it’s sure to prove a strong challenger in the class. Numbers are yet to be confirmed, but it’s likely to share the saloon’s 503bhp, 516lb ft turbocharged V8, and match its 4.1-second 0-62mph sprint.