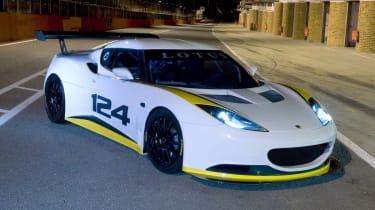 Lotus is taking its newest car to the races with this, the Evora Type 124 Endurance Racecar, built to meet FIA regulations and safety standards for 24 hour racing. Poke still comes from the Toyota-sourced 3.5-litre V6, but with a bit of race-tuning the power output has been hiked up from 276bhp to a not-insubstantial 395bhp. The Evora has also been on a strict diet, shedding 200kg to leave it weighing less than 1200kg. Aside from a mildly scarier power-to-weight ratio, the 124 also gets a six-speed sequential paddle shift gearbox as well as a roll cage, 120-litre ATL fuel system and fire extinguisher system – all FIA-compliant. A set of 18-inch Pirelli slicks has been mated to a race-spec suspension and braking setup, with AP Racing 6 piston callipers on both the front and rear, a race-tuned Bosch ABS system, 4-way adjustable dampers and adjustable anti-roll bars. The carbon fibre rear wing, diffuser and front splitter also help differentiate the 124 from the standard Evora, although the bodywork itself remains mostly unchanged. The Evora 124 Endurance Racecar is set to make its 24 hour racing debut at the Nürburgring 24 Hours in May 2010, although a Lotus factory-supported race program will hopefully see the Evora competing at the Merdeka Millenium 12 Hours (Sepang, Malaysia) in August 2010, BritCar 24 Hours (Silverstone) in October 2010 and the Dubai 24 Hours (Dubai Autodrome) in January 2011.