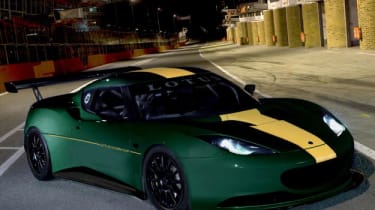 The Lotus Evora clinched our Car of the Year title back in October, and now the company’s announced a GT4-spec racing version, and a championship to go with it.  Here we see a taste of things to come, with the Evora Cup show car. Power comes from the same V6 found in road-going Evoras, although the displacement has been upped t0 four litres and the vee now makes 'more than 395bhp', according to Lotus. A dry sump has been added to cope with high-G cornering, and a six-speed sequential dog box with paddle shift control will make an appearance too. This is going to be one hardcore racer.  Typically Lotus, the car is much lighter than the road car. It’s shed almost 200kg, and now tips the scales at only 1200kg.  Other track-friendly tweaks include huge six-pot brake calipers up front and adjustable race dampers, traction control and fire extinguisher/engine cut-off switch combination in case the worst happens.  Exterior-wise, a Dallara designed aerodynamic package keeps things pushed into the tarmac with added down-force, plus aiding cooling. That colour is Epsom Green, with a Solar Yellow stripe. The Lotus Evora Cup will be a points-based championship, culminating in a pair of Lotus ‘festivals’ held at Donington Park (October) and Vallelunga in Italy (November).  Expect to pay £120,000 (plus VAT) for an Evora Cup car. It's currently on display at the Autosport show at the Birmingham NEC, which evo is at.