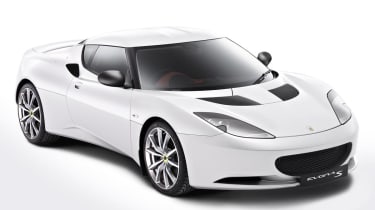 We’re going to be hearing quite a lot from Lotus over the next few weeks, but at the moment all we’re allowed to talk about is the supercharged Evora, which has finally been confirmed. To be called the Evora S, the 3.5-litre V6 has been boosted to 345bhp and 295lb ft (gains of 69bhp and 37lb ft), promising 0-60mph in 4.6secs and a 172mph maximum.

The price hasn’t been announced, but the S will come with the Sport pack as standard, which includes cross-drilled brakes, and a sport button that activates an exhaust bypass valve, alters ESP settings and sharpens throttle response. The suspension settings have also been tweaked.

Meanwhile the standard Evora will now be available with IPS (Intelligent Precision Shift), a six-speed automatic with paddle shift. Both the S and IPS are 50kg heavier than the standard model at 1435kg. Picture Gallery: see the Evora battle a Yeti in the snow We drive an Evora across Britain Read how the Evora fared against a Porsche Cayman S