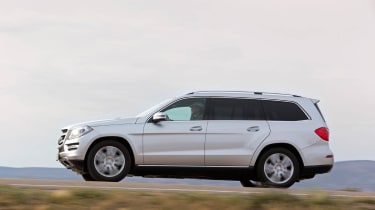 The second generation of Merc’s Panamax-sized SUV, set to be launched in the UK next April. A true seven-seater, the new GL-Class is similarly proportioned to the outgoing model but (very) slightly lighter and considerably more economical. UK buyers will be able to choose between the familiar ‘Bluetec’ 3-litre V6 turbodiesel and a 4.6-litre twin-turbocharged petrol V8. A 63 AMG version – a first for the GL - will follow later.

Technically the new GL is closely related to the recently unveiled ML, although with bigger proportions to contain its three rows of seats. At over five metres in length it’s a beast of a thing – nearly 20cm longer than the current Range Rover. And despite the use of some lightweight tech, it still posts a 2455kg kerbweight – more than enough to blunt the output of the 254bhp diesel engine.

The powertrain is pretty much exactly the same as that fitted to the ML350 Bluetec, with a seven-speed automatic gearbox and permanent four-wheel drive. The engine is already capable of meeting the forthcoming Euro 6 emissions standards, without a diesel particulate filter. Instead it needs to be topped up with Adblue for its urea injection system – although one fill will last for several tanks of diesel.

Merc is going to pitch the GL as a technology leader in the UK, with standard fitment of its collision prevention system – which sounds a loud warning if it thinks you’re about to hit something. Optional kit includes a new 360-degree camera system, the adaptive ‘active curve’ system to reduce body roll under cornering and adaptive lighting.

For the (likely tiny) number of buyers planning to take their GL into the proper wilderness, Mercedes will also offer an optional off-road package that includes increased ride height and a six-mode selector switch for different terrain clearly inspired by Land Rover’s Terrain Response System.

You won’t be surprised to hear that the GL drives very much like a slightly bigger version of the ML. The standard air suspension does a decent job of disguising the car’s mass when travelling in straight lines – on our American test route body control was good and cruising refinement was impressively high.

But, when asked to deal with corners, the GL struggles to contain the physical demands of its serious bulk. There’s lots of roll – regardless of the mode chosen for the adaptive dampers – and surprisingly modest lateral grip. The GL’s front end is always the first to run out of adhesion and – as with the ML – the stability control system engages aggressively when it detects slip, regardless of whether or not the traction control is on.

It’s not particularly rapid, either – feeling a measure slower than the 7.9 second official 0-62mph time might lead you to expect, thanks in large part to the relatively slow responses of the 7G transmission. The tardy response is particularly apparent at low speeds, with a sometimes alarming delay when pulling out of junctions.

On the plus side, the GL’s steering is accurate and its easy to place accurately on narrow roads, despite its supertanker rivalling bulk. There’s masses of space inside, too, and the cabin is well finished and full of kit. There’s usable room even in third row, with the option of a neat power-folding system for the rear seats to improve access.

The GL has always ploughed a bit of a lonely furrow in the UK – only 3167 of the first-generation have been sold here in six years. The new car is an update of the same formula, and although its pricetag will probably keep its appeal equally selective – the final asking hasn’t been decided yet – it does have a distinct niche for those looking for proper seven-seat practicality in a posh SUV. It’s only real rival in passenger capacity is the aged Audi Q7, and its third-row seats are nothing like as usable as the Merc’s.

Of course, next year’s all-new Range Rover will also come with the option of seven seats – and will be likely to give the GL a far tougher test.

Buyers looks to offset the 350 Bluetec’s relative lack of performance will be able to choose the GL 500, powered by the same 430bhp twin-turbocharged petrol V8 that’s fitted to the new SL – although at the cost of stonking fuel and tax bills.

The forthcoming GL63 AMG will be the first seven-seat AMG car – the unmourned R63 AMG was a strict six-seater. Merc claims it will be able to dispatch the 0-62mph benchmark in a frankly scary 4.9-seconds.

Mercedes claims 38mpg combined fuel consumption. According to the trip computer, we managed about 32mpg in mostly gentle use at 2000-metres plus altitude.