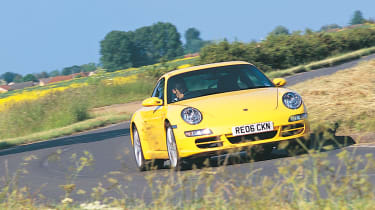 Three hundred and twenty-nine British pounds (and sixty-four equally British pence) is how much each of the extra 25 brake horse powers in this 911 Carrera S costs. Which is quite a lot of moolah, really. However, you do get the £1160 sports exhaust thrown in for that, plus 11lb ft more torque.

Porsche hasn’t just chipped it, though. To achieve the increases, the inlet and exhaust manifolds have been tweaked, the cylinder heads modified, the engine management zizzed-up a bit and the housing for the air-filtration system is now carbonfibre. All of which adds another 4mph to the top speed and strips a couple of tenths from the 0-62mph time.

Out on the road, with the Sport button having already been depressed and the sports exhaust flowing freely, the 3.8-litre flat-six sounds better than ever. It’s growling gutturally down low, then snarling with real anger when the engine shoves you in the kidneys again as the needle passes the 5500rpm mark. The engine certainly feels mighty fit, but we’ve never exactly felt short-changed by the standard one. Perhaps you should buy your Carrera S in standard trim, live with it for six months or so, then have the Powerkit fitted, just so that you can really discern and appreciate the full extent of your eight grand’s worth.

Ultimately, it’s not a bargain, but if you don’t want the hardcore nature of the GT3 every day and you want more purity than the Turbo offers, then the most powerful Carrera S might just tick all the right boxes.