Renault Zoe E-sport review - the future of the hot hatch?

An intriguing glimpse into the potential future of electric performance cars 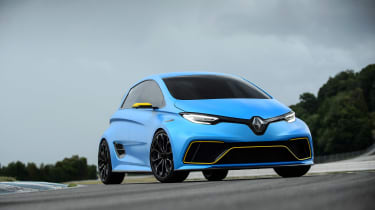 On the one hand, and no matter how cynical you might be, you can’t really ignore the idea of an all-electric hot hatchback with four wheel-drive and 454bhp. Especially one that rides on 20in wheels and which looks as downright sexy as the Renault Zoe E-sport.

But on the other hand, when you realise that said hot hatch is no more than just a concept that will never, claim its creators, see the light of day in terms of production, you can’t help wonder why on earth Renault went to so much trouble making it in the first place? 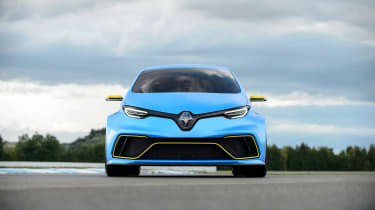 Answer; because Renault has a rich history of making mad but rather wondrous concept cars that aren't ever destined for production, and the deliciously pumped Zoe E-sport is merely the most recent of these to happen along.

Technically, if not visually, the E-sport provides a glimpse into the future regards what might be possible in a hot hatch in, say, six or seven years time. Its twin electric motors – one that powers the front axle, one that powers the back – and 450kg lithium ion battery pack are both technologies developed directly from Renault’s highly successful Formula E campaign. 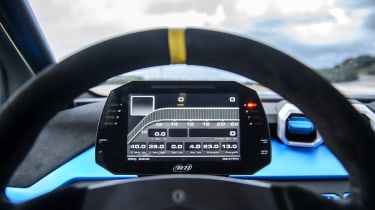 The way the batteries and electric motors are cooled is almost identical to the racing car, for instance, and the battery pack itself is located in the floor at the back, again in much the same way as it is in the Formula E car.

Even the chassis is a bespoke aluminium frame that is pure racing car, and bears zero similarity to what you’d find in a regular front wheel-drive Zoe, including a rear axle and racing diff at the back to match those at the front.

The combined output from the e-sport’s twin electric motors is a claimed 454bhp with 472lb ft available pretty much from the moment you so much as sneeze on the accelerator. As a result its performance figures are predictably comical. 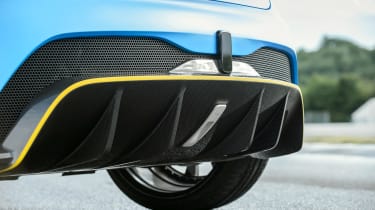 The transmission provides direct drive to all four wheels so there is effectively just one gear. The front axle can be separated from the rear at the press of a button beneath the dash to make the e-sport front wheel-drive, but with only half the overall power and torque.

Very different compared with a conventional hot hatch and, in most ways, very exciting indeed. The e-sport’s chassis is pure competition car in both its design and set up. It was developed for Renault by TORK Engineering who have adapted what is essentially an ice racing chassis to make it suitable to drive on a dry track (although understandably the e-sport doesn't much take to a wet track).

The dampers are four-way adjustable Ohlins at each corner, and the wheels and tyres are massive 20in items with a super soft compound by Michelin but still some evidence of tread to their design, so not a full blown slick in other words.

Just climbing aboard the e-sport is something of an art in itself. The high-sided race seat is not the easiest to squeeze in to, but once you’re ensconced the whole thing fits, just-so, even though there are three big blue buttons on the console that look highly intimidating, plus a dashboard that’s festooned with yet more buttons and lights.

The only ones that really matter, say the engineers, are those that indicate how much charge there is left for each motor, and whether you’ve selected forwards, reverse or neutral. Oh yes, and the big blue button in the middle of the dash that shows whether you’ve selected high voltage or not; you can tell if you have because there’s an almighty series of whooshes and whirrs when high voltage is deployed, at which point the e-sport properly comes to life. 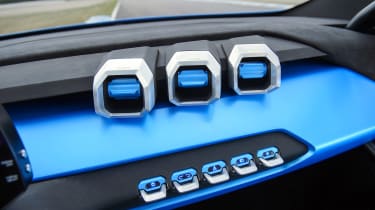 The electric steering is power assisted but still surprisingly heavy as I move away, out on to the private French test track that Renault has invited us to for the day. The ride is instantly racing car in that it is very, very stiff; too stiff, I’d say, even for circuit use. But it’s the noise that emanates not just from the electric motors and their cooling fans but also the rear diff and the tyres that dominates to begin with. For a pure EV the e-sport makes a right old racket on the move, even at 30mph, and when the camera car peels away after a couple of slow laps and I put my foot down properly for the first time, the noise levels go utterly berserk inside.

To a point where not only doe the e-sport feel quite a lot like a jumbo jet just before it takes off, it also sounds like one inside as well. The combined effects are weirdly, compulsively dramatic, and very quickly I start to get unusually carried away in the car, and have a huge over steer slide across a kerb in it half way round my first lap that nearly ends my day in tears, before it’s properly begun.

You soon learn, however, that a 450kg battery pack mounted at the rear equals monster lift off over steer, pretty much everywhere seemingly, and of the kind that isn’t especially easy to catch in a car with such a short wheelbase, even if there is four wheel-drive. But what I also discover about the e-sport after I calm down in it a bit is that there is traction – and absolutely massive acceleration – the like of which no hot hatch has ever had before. The hit of torque that arrives when you press the throttle is a) enormous, but also b) instant.

There is simply no delay whatsoever between pressing the throttle and the car lunging forwards, yet at the same time the traction is total. Which makes for some combination, even if the front end does want to push out wide if you give it too much throttle, too soon on the way out of a corner. 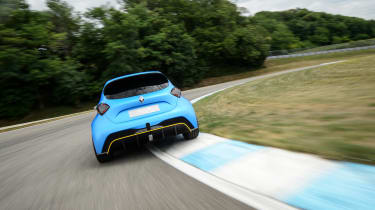 I had hoped that the e-sport might power over-steer, what with its mechanical rear diff and 50 per cent of its energy being deployed via the back axle. But in reality it feels resolutely like a front wheel-drive car that just so happens to have bags of traction.

In truth, the e-sport’s chassis set up could do with some fine tuning, not just to make it a bit softer but also to dial out the power-on under-steer that makes it so difficult to put the nose where you want it to. But hey, this is but a mere concept car, remember, one whose primary role is to wow the punters on motor show stands. So the fact that its handling is a bit on the spikey side, and its ride is pretty much non-existent, means not a great deal in the overall scheme.

Because ultimately the Zoe e-sport is all about demonstrating what’s possible from an electric hot hatch in the future, and it does so in some style.

There is no price for the E-sport because it’s a one-off concept car. It therefore has few if any real rivals either.

But in terms of performance it is way quicker than any of the quickest petrol hot hatches of the moment…until its batteries run out of charge, which happens after no more than 20 or so minutes of hard driving. And then they take eight hours to charge back up to full power again.

Thereby lies the problem with cars such as the Zoe e-sport, and until such issues are fully put to bed they will remain little more than an intriguing folly… for the time being.