A trip abroad revealed a weakness with LPG-converted vehicles... 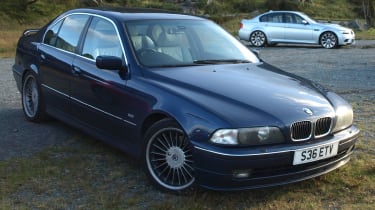 From the stream of abusive text messages I was receiving, I got the impression that photographer Gus Gregory wasn’t exactly enamoured with our Alpina. It was the start of the French leg of evo Car of the Year, and by the time the rest of us had reached the Channel Tunnel, he was already in Reims.

Vehicles with LPG conversions aren’t allowed on the train, you see, so Gus was obliged to take an earlier ferry. But this, I’d surmised, was a top plan – he’d get to our first photo-shoot location early to recce the area, and on the way there he’d enjoy the effortless cruising ability of the B10 while utilising France’s extensive network of LPG stations. It didn’t work out that way, though…

Apparently the Alpina’s boot, which now houses the gas tank, was ‘2 bloody small’ for his kit, while a balancing weight had fallen off one of the front wheels causing a ‘f-ing wobble’ to be transmitted through the steering wheel. This was bad enough, but there was more – it turns out that the French use a different type of ‘soddin’ nozzle on their LPG pumps and, after repeated attempts at trying to make one fit, Gus was well and truly ‘peed off’. Uh-oh.

It turns out that you need a little screw-on adaptor to make the LPG nozzles they use on the continent compatible with a UK conversion, and you should get one when you have your car converted. But our Alpina was missing its, and without it we had no choice but to run the car on unleaded for the rest of the trip – that’s why the equivalent mpg figure is lower than it ought to be this month.

Fuelling up with LPG during part one of eCoty, in North Wales, wasn’t quite as easy as it is in Northamptonshire either – the only station in Snowdonia selling the stuff is in Conway, which meant a 20-mile detour was required for each fill-up.

At least we knew this in advance, though, thanks to one of the many websites that detail the locations of all the LPG stations in the UK. Most of these give you the current price too, and it seems the very cheapest LPG can be found in the southwest, where the (so called) Countrywide chain operates. How does less than 50p a litre sound?