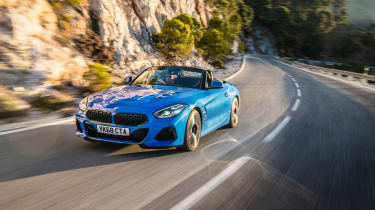 With the headline M40i model already unleashed, BMW is wheeling out the less powerful versions of its Z4 sports car, with the entry-level 2.0i model first to arrive. Having been a little underwhelmed by the M-light version, it seems unlikely that the four-cylinder 194bhp offering can right that car’s wrongs, but the feeling has always been that the bare bones of the new Z are right, it just needs the right spec to deliver on its promise.

Unlike the M40i which uses the single-turbo 3-litre straight-six, the 20i and 30i models share a turbocharged 2-litre four-cylinder B48 unit also found elsewhere in the BMW and Mini range. The 20i we’re driving here produces 194bhp, with a useful 236lb ft of torque from 1450rpm. Like the whole Z4 range, the 20i comes with the eight-speed Steptronic gearbox as standard, with no manual option at the moment, although a six-speed manual will eventually join the range later down the line. Zero to 62mph is dispatched in 6.6sec, while top speed is 149mph.

The Z4 is now built in Austria alongside the 5-series saloon, because it rides on a shortened version of that car’s CLAR platform, one also shared with the latest Toyota Supra. That results in a significant growth over its predecessor at 85mm longer and 74mm wider, it’s also a fraction taller, although the wheelbase has shrunk by 26mm compared to the old Z, it also has the inevitable increase in weight too. However, the Z4 20i is 130kg lighter than the M40i with has that bigger engine and more complex adaptive suspension.

Choose a 20i in Sport or M Sport specification and it comes with 18-inch alloy wheels shod with 225/45 rubber at the front and 255/40s at the rear, but tick the M Sport Plus box and you get 19-inch wheels with fatter tyres and the adaptive M Suspension from the M40i – arguably overkill for this kind of power output.

Swallowing wholesale the interior tech from the 3-series is both a good and bad thing. On the one hand you have more toys and systems than any other roadster this side of a Mercedes S-class cabriolet: active cruise control, parking assistance, head-up display and the Live Cockpit set-up which provides a large central touchscreen and a digital instrument display, all of which is nice to have and looks good in the brochure. 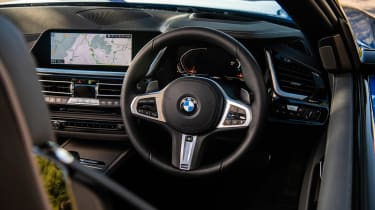 The downside is that you’re left with a cockpit that is more luxury saloon than two-seat roadster, with a wide transmission tunnel and a well-integrated if sizeable dashboard in front of you. For most buyers the appeal of the tech will win over, but the notion of a pared-back sports car with nothing but the essentials is clearly in the past.

From all angles on the exterior the new Z4 sure is distinctive, and there are a scattering of visual tie-ins with previous generations to keep the bloodline, but the inevitable compromises around the nose for the sake of pedestrian impact protection water-down what should have been a fine nod to pre-1980s shark-nose BMWs of old. The stumpy wheelbase and bloated overhangs keep this latest Z4 from being as resolved as its predecessors though, losing some of the hotrod-like proportions thanks to that shared CLAR platform.

Almost immediately the 20i answers some of the criticisms levelled at the more powerful M40i. It may be artificially enhanced via the car’s audio system, but for much of the time it actually sounds better than the six-cylinder; fire it up and there’s a purposeful burble from the exhaust, with a greater vocal range around the rev counter. It feels like the most has been made of what genuine sound it has to offer, while the M40i has been sadly strangulated.

Those first few miles also indicate that the simpler set-up of the 20i allows the core quality of the chassis to shine through too. The skinnier front tyres and pleasingly thinner steering wheel mean you have a better idea what the front wheels are up to, even in town driving, while the reduced weight allows the Z4 20i to flow more readily over the road surface; arguably it moves around more over undulations but it feels more in tune with the asphalt rather than steamrollering over it. Ultimately the ride quality is excellent, and the stiffness of the structure pays off; even if you drop into a pothole you get no more shake than you would do from a fixed-roof coupe. 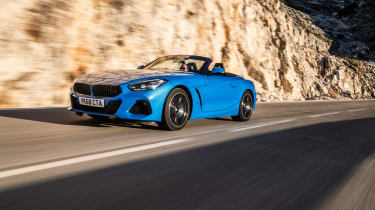 Driven back-to-back with the M40i it’s hard not to feel that the 20i lacks pace. The outright performance figures don’t lie – 0-62mph in 6.6sec simply isn’t slow – but even with the roof down the sensation of speed is sometimes lost because the ride and refinement are so good. The strong torque results in good pick-up from low revs, but it can’t match it with redline punch, and although the eight-speed auto cannot replicate the fleetness of a good dual-clutch gearbox, it rarely thwarts planned downshifts and is a breeze to use in automatic mode.

Where the Z4 20i really shows its value is when pressing on, and the subtle differences in specification make themselves felt. The steering still has less feel than is ideal, but in comparison with the M40i it is far more chatty, feeding back more detail about the road surface and varying its weighting as the grip levels change. That makes it easier to lean on the narrower tyres too, skirting around the edge of the available grip at lower speeds and making the most of the natural balance front to rear. On dry roads there’s more grip than 194bhp can realistically challenge, but ultimately there’s more fun to be had even though you’ll be travelling a little more slowly – possibly because of the £12,000 change in your pocket. We’ve yet to drive it, but the spikier 30i may just be the sweet spot of the range. 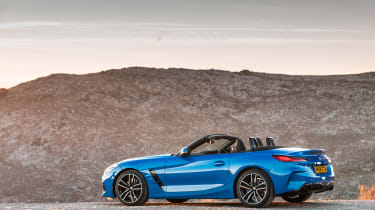 As an entry-level model, the Z4 20i’s starting price is a reasonable £36,990 in the UK, with the M Sport model pictured here starting £1800 more at £38,740. Standard equipment is not as sparse as you might expect, with standard 18-inch wheels, leather trim, LED headlights and the full suite of BMW’s latest infotainment system all standard.

Rivals at this price-point are sparse, sitting somewhere between small roadsters like the Mazda MX-5 and Abarth 124 Spider, and more expensive sports cars like the Alpine A110 and Porsche 718 Boxster. The reality is that the Z4’s size and features do put it reasonably between these two classes, but nearly all rivals out-entertain the Z4 20i as a drivers car.