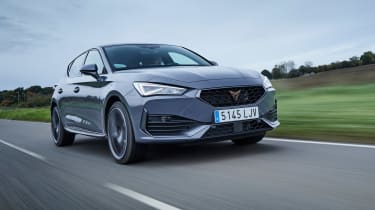 Punitive taxation will see plenty more manufacturers turning to hybrid hot hatchbacks over the coming years, and SEAT’s performance brand Cupra is getting in on the act early with the new Cupra Leon eHybrid. Matching the conventional Cupra Leon on output but promising high economy and low CO2, is it worth considering?

Like the old Golf GTE (and indeed the new one) the Cupra eHybrid uses a 1.4-litre TSI petrol engine paired with an electric motor. The former makes 148bhp and 184lb ft of torque, the latter 113bhp and 243lb ft, but as is typically the case their combined efforts result in figures different from simply adding both pairs together: 242bhp and 295lb ft.

The other relevant numbers are six (the number of ratios in the dual-clutch transmission), 12.8 (the capacity, in kilowatt hours, of the lithium-ion battery) and 32 (approximate grams per kilometer of CO2, with UK figures yet to be confirmed). Here are two more: 6.7sec to 62mph, and 140mph flat out. 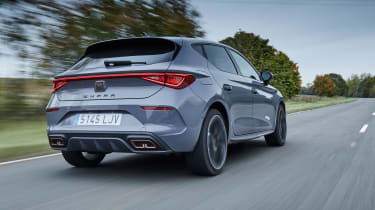 Actually, there’s one other number worth mentioning: the 1596kg kerb weight. It was this that always made Volkswagen’s old Golf GTE feel a bit slovenly compared to its GTI counterpart, and it’s also a good excuse for charging the eHybrid every time you get a chance. You can still drive around on petrol power when the battery depletes, but do so and you’re lugging around all that weight for nothing. Cupra quotes 32 miles of all-electric range – a real-world 20-25 miles is more likely.

The Leon eHybrid is a car with an identity crisis, stuck between the apparently disparate aims of hot-hatch style thrills and easy-going hybrid cruising. Concessions to the former hinder the latter and vice versa, and the resulting experience is predominantly disappointing, save for a few flashes of talent here and there.

Starting with the good, the Leon has a fundamentally well-sorted chassis, with a balance of qualities that make brisk A- or B-road driving a fluid and intuitive experience. The steering is probably the highlight – it’s not much of a chatterbox, but it’s accurate without being darty and the weighting strikes a fine compromise between reassuring heft and modest effort. 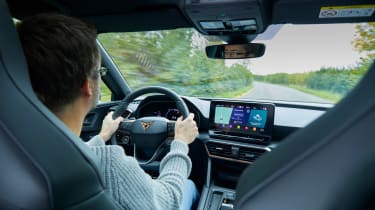 It’s backed up with good front-end bite and a rear axle that’s willing to help point the nose where you want it. On 235-section Goodyear Eagle F1 Super Sport tyres there’s good grip too, but enough movement to feel when you’re testing the chassis – it’s capable, but not too tied-down, in other words. You can feel the weight compared to a conventional hot hatch, and the big 19-inch wheels are occasionally caught out by certain bumps, but in isolation neither is a great barrier to enjoyment.

Which is more than can be said for the powertrain. The pseudo five-cylinder growl in Sport and Cupra modes isn’t too bad and ramps up the drama, and outright pace is brisk enough, but the electric and petrol elements always seem to be fighting each other. The electric motor doesn’t quite have the power on its own for that satisfying EV-only thrust of a full-electric car, but rousing the engine takes several beats longer than you’d hope too. In the time it takes to wake and find the right gear, most conventional hot hatches would already have stolen several lengths. 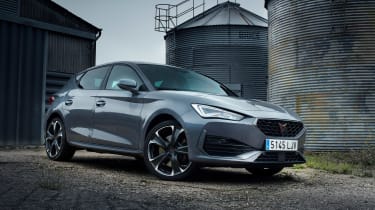 You can shift manually of course (with the cheap-feeling, poorly positioned paddles) but there are still inconsistencies. On the overrun the engine is virtually silent and engine braking minimal even in Cupra mode, so you’ve little idea what gear you’ve changed down to until you accelerate out of a corner. The instrument cluster also regularly nags you in Sport and Cupra modes to change the gearbox back to its more economical Normal mode, and unless you’re braking hard, the brake pedal feels spongy, like it does in many hybrids.

UK pricing is yet to be revealed, though if the old Golf GTI, GTD and GTE were anything to go by, you can expect to pay a grand or two more for the eHybrid than the conventional 242bhp 2-litre counterpart that’s also on the way. VW’s GTE will be the most obvious rival, though ignore the hybrid element and the £30k bracket is awash with hot hatches from virtually every manufacturer. Until something better comes along, our pick remains the Civic Type R. 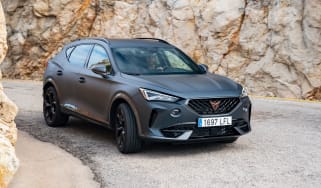