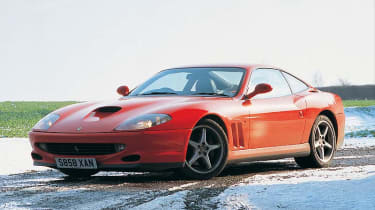 Always thought it was odd that most Ferrari owners don't cover a lot of miles. After all, you don't generally buy a car just to look at it, and think of the fun to be had from caning a Ferrari every day! It's as if Ferrari owners believe that their race-bred engines might go pop if they did, or the servicing costs they'd incur with more mileage would be so horrendous that they'd make themselves terminally miserable. Or perhaps it's because owners believe that when they'd had their fun they'd end up being lumbered with an unsaleable lump of worn-out Italian exotica.

Well, I say this is all nonsense. Montezemolo commissioned the 550 specifically to be the most useable Ferrari ever produced, even building-in extended service intervals to the design concept. It would be plain wrong to leave a 550 in the garage for weeks on end. It helps that ours has done a serious chunk of its depreciating already (the £60K purchase price is nearly £100K less than when it left the showroom) so my plan was always to make this 550 work for a living.

Still, even I was a little surprised when the digits on the odometer rolled round to display 20,000 miles, meaning we'd covered a chunky 5000 miles in a little over eight weeks; oops. Compare that with the previous owner's ridiculous 230 weeks (four and a bit years) to cover the same mileage.

During the last few weeks the 550 has had to cope with horribly early starts, airport car parks, rain and even snow on a few occasions, although I did draw the line at taking it out when I couldn't tell where the drive started and the field finished after a particularly healthy dump of snow.

The Ferrari feels like I do on cold mornings - a little slow and cranky. It takes a while longer to whisk the alloy gearlever around the gate, while odd clicks and whirling noises seem to percolate through the cabin, only to disappear once the engine starts to warm up. That's something it does very quickly, and within a few hundred metres the 550's heater is soon pouring serious heat into the cabin. Then again it should be pretty efficient with a super unleaded-guzzling, 5.5-litre V12 boiler up front.

So far the only fault that the 550 - christened the Big Red Fiat around the office - has developed is with the actuators that sit on top of the damper units and adjust the damper rate via a little electric motor. They don't like the cold, and if it's below freezing the dash displays a picture of a 550 with little triangles under the wheels indicating a fault. Once they've warmed up, though, or the outside temp gets above 5C, the fault disappears so it's hardly something I'm going to go rushing to the dealer to get fixed.

Predictably, I've parted with a fair bit of cash already, starting with an official Ferrari warranty. (In preparation for Ferrari ownership I had earlier taken the precaution of having my letterbox enlarged and my credit card limit raised.) There are several types of warranty available for pre-owned Ferraris and you don't have to buy your car from an official dealer to be eligible. You will need to take your car to a dealer for an inspection and they'll advise you on what's available; with the age of my car only the 'Power Train' warranty was available which, as you can probably guess, covers just the engine, ECUs, gearbox and diff. The cost is £2335.90 for a year's cover.

Sounds a lot, but I figured it would be worth it during our first year together, since I don't know how the car had been driven by its previous owner. Having forked out, and somewhat perversely, I'm almost willing the engine to blow up during the next few months so I get to make use of this gold-plated warranty.

At least the 550 doesn't have to go scurrying off to the comfort of the dealer's workshop at silly service intervals, unlike our long-term Mitsubishi Evo MR 340, for example, with its daft 4500-mile intervals. All Ferrari asks is that you service your 550 once a year or every 12,500 miles - there goes the first urban myth about the cost of running this thoroughbred.

So, however you use your car you're unlikely to see your dealer more than once a year. The only time-sensitive items outside the regular service intervals are the infamous cambelts. These need changing every three years, come what may, but (and here's the next myth to be tossed into Room 101) on the front-engined Ferraris this is only a four-hour job, compared with the credit card- wilting 24 hours needed for mid-engined Ferraris like the F355. That's because they have to have the engine removed before the belts can be replaced, although the F430 has chain-driven cams that are maintenance-free.

As my car last had a service in September 2004, at 15,100 miles, officially it's not due another until September this year, or 27,600 miles - I know which is likely to come first if I keep piling on the miles at the current rate. It will, however, need a cambelt change in April, as that will be three years since it was last done. I may try to find an excuse to get down to the dealer a little earlier than that, though, as a Maserati Quattroporte is on offer as a loan car, which ought to reduce the pain of losing the Ferrari for a couple of days considerably.

Wind the clock back ten years and compare this level of service to when I used to take my Maserati Ghibli in for servicing every 6000 miles. Back then you got a Fiat Punto as a courtesy car, with 'My other car's a Maserati' etched on the windows. Nice touch, that - kept me rushing back for more, I can tell you.