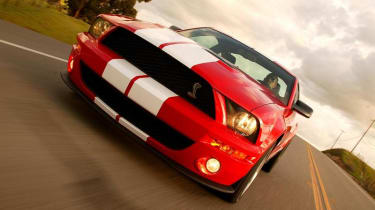 From the air, America seems to be either wilderness or a massive graph-paper-like grid of arrow-straight roads. Yet I've just driven 11 miles of the most cambered, twisting, narrow blacktop that you could wish for in Scotland, let alone the US of A.

With occasional damp patches and the odd biker or two lurking around the unfamiliar twists and turns, a near-two-ton Mustang might not seem like the ideal tool. But this one was great. So great that I turned round and drove the road again. And again.

Ford's Special Vehicles Team has a lot to live up to. Its previous car, the Ford GT, is our current eCoty holder, and most of the small, 40-man team moved straight from that project to this one - the Ford Shelby GT500.

It seems that they couldn't help but bring some of the supercar with them, too. The engine lurking beneath the 'hood' is a cast-iron-block version of the GT's powerplant, all 5.4 litres of it. The screw-type supercharger has been changed for a Roots one to bring the torque curve lower down the rev- range, but the figures are barely diminished from those of its mid-engined sibling: 500bhp (50 less than the GT) and 480lb ft (down just 20).

The brakes and tyres also benefit from the GT project. The 355mm front discs clamped by four-piston Brembos are straight off the supercar, while the Goodyear Eagle F1 Supercar tyres are of the same pattern and compound. Another car to play its part in the development of the Shelby, both in the personnel recruited to work on the project and also the car's aerodynamics, was the successful Mustang racer. The GT500's bonnet vents, for example, are a direct result of what the race team learnt by experience; without the vents, high pressure builds up underneath the bonnet and eventually it'll fly off. The rear diffuser between the exhausts and the front splitter are also tried and tested by the race team and not just there for show.

The final piece in the development jigsaw is the man whose name this Mustang bears. Dressed in black from Stetson to shoe in spite of the heat of the day, Carroll Shelby is full of praise for what SVT has done. 'I don't want to knock the importers,' he says, 'but this car will do anything in the way of handling, performance and braking that a $100,000 import [think M6 or AMG Merc] will do - and for half the price.' It's a bold claim...

Even in a land where everything is gargantuan, everything has a V8 and, to a wide-eyed newcomer, everything looks slightly crazy and exciting, the Mustang 500GT stands out a mile. Whether red with white stripes, white with blue, or yellow with black, it looks fantastic. The standard car isn't exactly a shrinking violet, but driving past one in San Francisco it gives the impression of being decidedly limp when shoulder-to-shoulder with the gaping grilles and swollen arches of the Shelby. Put a hulking, fully-fledged NFL quarterback next to a spotty college player and you'll get the idea.

Inside, the seats have been stuffed with a little more bolstering and the rev counter and speedo have swapped places and been given SVT decals, but otherwise the interior will be very familiar to the owner of a standard 'Stang. It's almost a disappointment until you remember that the Shelby will cost just $40,000 in the USA.

The first time we get to drive the GT500 is at the California Speedway. NASCARs are rumbling around the bowl, but we're on the infield circuit. It's surprisingly twisty, which means it ought to emphasise the two things that might be expected to hobble the Shelby: understeer (because it's a heavy car with a heavy nose) and the brakes.

The discs and pads on the standard Mustang would wilt after three laps of any circuit, so in good investigative journalism fashion I set about trying to destroy both the Shelby's stoppers and probably the nerves of the engineer sitting next to me. But it doesn't happen. The engineer looks a little peaky, but the brakes simply soak up the punishment.

Despite feeling the weight slung out ahead of you, there's never a frustrating struggle to get the Shelby turned-in either. When understeer does build, a slight lift of the throttle happily restores grip to the front, then the engine is more than happy to oblige in providing a little encouragement from the rear. SVT has also readjusted the traction control for the Shelby so you can get a decent level of slip going before it stops the fun. And fun it very much is - happy to slide and, certainly on this tight circuit, easy to catch. In the wet, however, the Shelby would undoubtedly leave you with both hands very busy on most corners - and quite probably the straights too.

The next day, out on the bucking tarmac of the test route somewhere near San Fran, the Shelby is simply monstering the road, piling on vast tracts of speed between corners to the tune of the shrieking supercharger. Threading the big Ford quickly through narrow twists and turns certainly isn't a delicate process, but neither is it the battle you might expect. The steering is nicely weighted, with enough information coming through the big wheel to let you know when the front end is starting to reach the limit of grip. The shift action of the Tremec gearbox is impressive too - smooth and light, especially given the forces it's dealing with.

The fact that the Shelby's front splitter not only fails to graze its chin on the asphalt even once, but never feels like it's going to either, is a good indication of just how well tied-down everything is. The live rear axle runs out of talent eventually, but you have to push a long way and things have to be happening very quickly to really unsettle it, at which point it all goes floaty underneath you, the suspension feeling like it's a fraction of a second behind what's happening beneath the wheels.

Talking to Carroll Shelby earlier, it emerged that at least one of the prototypes they had running around was fitted with independent rear suspension, just like the original GT500. Although good, it added weight and a price penalty of roughly $5000, so it was canned in favour of the solid axle.

Comparing the GT500 to an M6 or AMG might seem laughable on the surface, but the Shelby gets under your skin. It's a big friendly giant of a car, and where its German rivals have got seven-speed gearboxes and precision-damped cup holders, the Shelby has something you can't engineer with all the technology in the world: character. Unfortunately, unlike the Ford GT, none of the 8000 Shelbys that will be made each year will officially come to the UK. And that's a crying shame, because we've got some pretty good roads too...