New Ford Fiesta ST-Line review - has the nation's favourite supermini still got it?

The Ford Fiesta has lost none of its appeal for keen drivers, thanks to its sharp handling and punchy petrol engines. 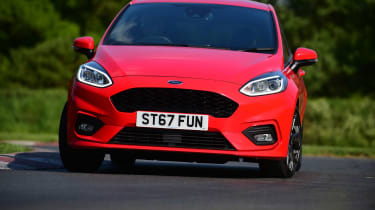 Even in its more basic forms the Ford Fiesta has been a firm favourite with evo, thanks in no small part to one of the best chassis in the supermini business. Seamlessly blending agile and engaging handling with a compliant ride, the baby Ford proves that you don’t need to spend big to experience dynamic sophistication.

Better still, at the top of the Fiesta range is the exceptional ST, which turns the driving experience up to 11. Not only is it even sharper to drive, it packs a punch big enough to give larger and more expensive hot hatches the odd sleepless night.

However, it has been nearly a decade since the current car made its debut, and the competition has wasted no time in trying to topple Britain’s bestseller. They’ve not yet managed to match the Ford for driving fun, but in all other regards the Fiesta has been left in the shade. 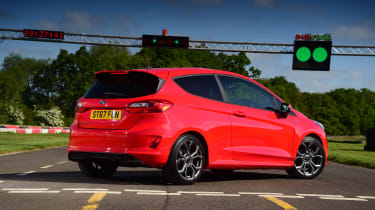 As a result, the arrival of the all-new eighth generation model couldn’t come soon enough. Bigger, more refined and loaded with cutting edge kit, the latest Fiesta aims to add some much needed upmarket appeal to its predecessor’s appetite for entertainment.

That said, Ford clearly isn’t keen on messing with such a huge sales success, because the latest Fiesta looks a lot like the old car. There’s the same trapezoidal grille, sweptback headlamps and rising waistline, while the side windows look like they’ve been carried over almost unchanged – although they’re actually shallower for a more dynamic look.

Still, our ST Line car is given a more aggressive stance, thanks to its bespoke bodykit that’s made up of reprofiled front and rear bumpers, side skirts and some discreet ST Line badging on the front wings. It's meant as an affordable understudy to the flagship ST, and that's exactly how it looks - sporty without being shouty.

Unsurprisingly, the biggest changes have been reserved for the interior, where the old car’s infotainment system, cheap plastics and Atari-style graphics had begun to feel just a touch last century. As you’d expect, Ford has made big efforts to push the new car upmarket, with slick design and high quality materials featuring throughout. 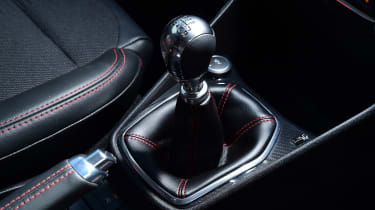 Dominating the new Ford Fiesta interior is the tablet infotainment screen, which now sits in easy reach on top of the dash – the old set-up was buried in a deep cowl at the base of the windscreen. Depending on your trim level (there’s Style, Zetec, ST Line and Titanium, plus X versions of the Titanium and ST Line, as well as a Bang & Olufsen Play upgrade on selected models) you get a 4.2, 6.5 or 8.0-inch screen. The two larger set-ups also boast touchscreen functionality and Ford’s SYNC3 interface that features Apple CarPlay and Android Auto.

The new cabin is also bigger, thanks to external dimensions that are stretched by an extra 71mm in length, 12mm in width and 4mm in the wheelbase.  That sounds like a lot, but it simply means the Fiesta now has similar head, leg and shoulder room as the new SEAT Ibiza and VW Polo.

Under the bonnet it’s business as usual, with the Ford getting a familiar line-up of turbocharged 1.0-litre three-cylinder EcoBoost engines (with either 99,123 or 138bhp) and 118bhp 1.5-litre TDCi diesel. There are new powerplants, however, with a naturally aspirated 1.1-litre triple appearing in lesser models and an all-new 197bhp 1.5-litre three-cylinder slated for the forthcoming ST.

All EcoBoost engines are mated to a six-speed manual for the first time, while a six-speed auto is optional.

Underpinning the latest Fiesta is the same Global B platform that was used on the outgoing model. However, it has been overhauled in almost every area.

For instance, greater use of high strength steel means that the structure its bigger than before without any significant increase in weight. Then there’s the suspension, which features a similar strut front axle and torsion beam rear, but with wider tracks (30mm at the front and 10mm at the rear). Also included is a torque vectoring system similar to that used in the larger Focus, which brakes individual wheels in an effort to curb understeer.

The steering system has also been reworked, with the electrically assisted set-up benefitting from a 20 percent reduction in friction, which the engineers claim boosts feel and feedback on the move. Combined, these changes are promised to deliver a 10 percent improvement in grip, which is quite a lot. 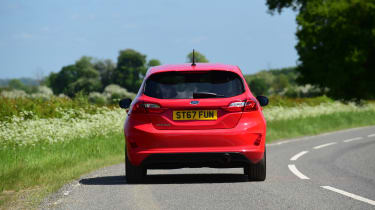 On top of these tweaks, the ST-Line proves that it’s more than an exercise in badge engineering thanks to its own suspension tuning that comprises a 10mm lower ride height, plus stiffer springs and dampers. Engineers have also tweaked the calibration of the electric power steering to deliver meatier weighting.

Elsewhere, the technological improvements are concentrated on the Fiesta’s infotainment and safety systems. For many buyers of superminis, it’s the former that’s most important, and so Ford’s SYNC3 system will be a welcome addition.

Available with either a 6.5-inch or 8.0-inch touchscreen that features crisp graphics, the set-up gets the brand’s AppLink software that bundles together Apple CarPlay and Android Auto. The system is easy to use, while upgrades such as sat-nav and a ten-speaker Bang & Olufsen hi-fi are reasonably affordable at £300 apiece.

When it comes to safety, all Fiestas get Emergency Assistance and lane departure warning, while big car features such as adaptive cruise control, cross traffic alert and pedestrian detection are all available as options, which will be very reassuring to many buyers.

The all-new Fiesta gets a fairly familiar line-up of engines, with the three-cylinder EcoBoost petrol and four-cylinder 1.5-litre TDCi making their way over from the old car – although with a fraction more power in the case of the diesel.

If you can't stretch to the ST, then it'll be ST-Line models powered by the 1.0-litre EcoBoost engine that provides the most interest. Carried over from the old car, it packs 138bhp and 133lb ft, which is just enough poke to back up the ST-Line’s racy design cues. More importantly, it’s mated to a six-speed manual for the first time. Not only does the new transmission help boost performance – 0-62mph is covered in a reasonably brisk 9.0 seconds – it benefits from a light and precise action that encourages you to shift just for fun. 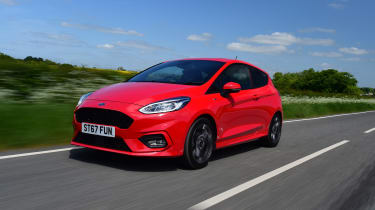 Improvements to the engine’s sound insulation and mounting mean it’s a less intrusive unit than before. Fire it up and it settles to a subdued idle, while working it hard results in a characterful three-cylinder thrum, but with none of the unwanted tingles and vibrations that occasionally blighted the old car.

It performs well too, pulling reasonably strongly from low revs and spinning happily around to 6,000rpm or so. You’d struggle to call it fast, but with peak torque arriving at just 1,500rpm, the Ford feels muscular enough when overtaking slower traffic or powering up steep hills.

When it came to driver entertainment, the old Fiesta was a shining light in a class of capable but rather anodyne machines. Happily, Ford hasn’t mucked up the winning formula with this new version. It’s a more mature proposition than before, but the sense of fun and engagement remains.

It starts with the driving position, which places you low in the car so you feel at the centre of the action. Better still, the major controls are perfectly placed, while the weighting is spot on – from the moment you pull away you can tell this is a car that’s been developed by people who understand that driving matters.

The revised steering is a fraction lighter than before, but the rack is progressive and there’s just enough feedback to make things interesting. ST-Line models get a fractionally meatier feel, but nothing that detracts from the car’s day-to-day usability.

Engineers claim that the increase in track width and the adoption of brake-based torque vectoring mean grip levels are up 10 percent. It’s hard to put this to the ultimate test, but the newcomer certainly clings on harder than before, while the front axle does a better job of resisting confidence-sapping understeer. 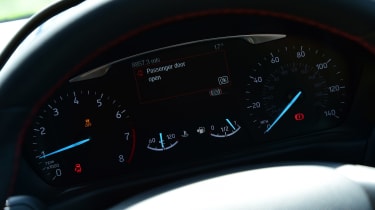 There’s a playful side to the Fiesta, too. You can’t disengage the ESP on these lower spec models, but the electronic safety net gives you enough leeway to trim your line with either steering or throttle. And like the best Ford designs (Focus and old Fiesta), the current car feels like it’s pivoting around the centre line, boosting the car’s agility.

Adding to the impressive dynamics are brakes, which offer excellent progression and decent stopping power.

The really clever bit, however, is that this nimbleness doesn’t come at the expense of comfort. Even on the more firmly damped ST-Line the ride is cushioned and controlled. There’s some low speed firmness, but even then the edges are taken off sharp ridges and potholes.

Equally impressive is the quietness of the ride. Road roar isn’t an issue and even larger impacts are muted. It’s so good that it only serves to highlight the slight wind rustle from the A-pillars – although it’s hardly intrusive.

Prices for the Fiesta start at £12,715 for the 1.1-litre 69bhp Style model, but the three-door (as before there’s a choice of three and five-door bodystyles) 1.0 EcoBoost 140 ST-Line weighs in at £16,945. That puts it head-to-head with the new SEAT Ibiza 1.2 TSI in FR Red Edition trim, which has a little more kit but with 108bhp it has less power. It’s also currently only available in five-door form until the SC coupe makes its debut later this year.

> Click here for our review of the all new SEAT Ibiza

Other options include the VW Polo 1.0 TSI R-Line, which’ll set you back a hefty £17,630. It rivals the Ford for refinement and edges ahead for perceived quality, but its 108bhp three-cylinder is down on power plus it’s polished driving dynamics aren’t quite as involving.

Perhaps closest to the Fiesta in price and execution is the new Suzuki Swift Sport. At £16,499 it's cheaper than the Ford, plus the combination of sub 1000kg kerbweight and punchy turbocharged 1.4-litre mean its faster too. Then there's the lengthy kit list that extends to big car features such as adaptive cruise control and sat-nav. Yet while it's naturally aspirated predecessor was a magnet for fun, the new car has been given a more grown-up character. It's more refined and comfortable than before, but the inert handling doesn't have you longing for your favourite back roads.