Ford Fiesta Active – a crossover with delicacy and poise

Despite its raised ride height and softer set-up, the Active retains many of the standard Fiesta’s best attributes 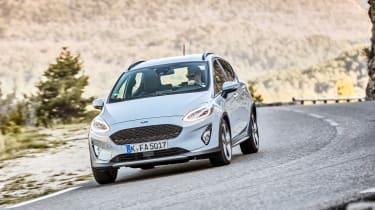 You might already think that Ford has a Nissan Juke and Renault Captur rival in the form of its EcoSport, but according to Ford, you’d be wrong. Apparently the EcoSport is more of an SUV, albeit a small one, rather than a crossover like the aforementioned Nissan and Renault.

So to rival the Juke and Captur, and all those other tall, tottering hatchbacks, Ford has jacked up the body of its new Fiesta, softened its chassis, added some roof bars and black wheelarches and called it the Fiesta Active.

Now, that might not sound like a very ‘evo’ thing to do to a car – the new Fiesta ST, with its lower, firmer chassis, bigger wheels and more powerful engine, certainly sounds more promising to us – but some of the lofty, pseudo-off-roaders we’ve tested have been more interesting and more involving to drive than you might think. Audi’s A4 All-Road, Skoda’s Octavia Scout and Volkswagen’s Passat Alltrack are all more demanding on twisty tarmac than the lower, regular alternatives and, as a result, are arguably more entertaining to drive.

The Fiesta Active, however, isn’t based on an extremely polished, super stable, rather anodyne car, like the aforementioned Audi, Skoda and VW. Instead the basic Fiesta offers a rather enjoyable drive with just enough feedback and plenty of poise. Do the changes made to the Active give it a fun new persona or do they undo the Fiesta’s natural composure?

As we’ve mentioned, the Fiesta Active’s chassis isn’t the usual evo domain, but it’s worth knowing exactly what’s been altered. Not only have the springs been replaced by taller items that increase the Fiesta’s ride height by 18mm, the dampers have also been exchanged for ones using hydraulic bump-stops. The track is 10mm wider, but the front suspension is still MacPherson struts, while the rear is a torsion beam.

Like the new Fiesta ST, the Active has a selection of driving modes. Normal is the default setting, designed for most everyday driving, and there’s an Eco mode (only on the manual versions) to help drivers use less fuel. Finally, there’s a new setting called Slippery. This does not make the car more slippery – it doesn’t make it more aerodynamic to increase its top speed, nor does it make it particularly difficult to catch if it gets out of shape. Instead it’s designed to help the Fiesta Active on slippery surfaces by adjusting the throttle, stability control, traction control and brakes to maintain grip as much as possible.

There’s a choice of two engines in the Fiesta Active, a petrol and a diesel. However, these are available in numerous states of tune, making the decision a little more complex.

The diesel engine is a turbocharged four-cylinder unit, which is available with two outputs: 84bhp and 118bhp, with associated 0-62mph times of 12.6sec and 9.4sec. 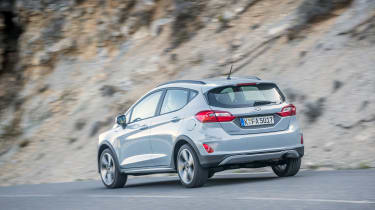 A six-speed manual gearbox is standard; an automatic with the same number of ratios is available as an option with the 99bhp petrol motor only. It lengthens the 0-62mph time by 1.8sec, making it the slowest Fiesta Active of the lot.

Naturally, we tested the 138bhp petrol version. The Fiesta Active may not be a performance car, but it’s still mostly likely to shine within evo’s parameters if it’s got some meaningful shove.

There’s no hiding the fact that there’s only three cylinders under the bonnet: the engine noise in the cabin has that not unpleasant, but not particularly evocative, off-beat rumble that triples often emit. The way it revs – which is rather laboriously – is less polarising, as it makes the car feel lazy when it accelerates. 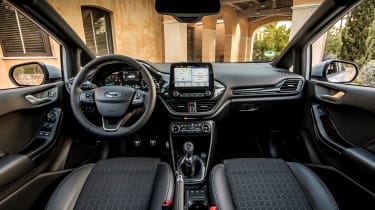 How the needle moves slowly around the rev counter is more noticeable in the higher reaches of the engine’s range (it’s limited to 6500rpm), because here it also holds on to those revs when you change gear, making switching ratios swiftly a difficult and lurchy process.

The motor is best when operating between 3000 and 5000rpm, where there’s a decent swell of torque and you can swap gears decisively, making the most of a direct and solid gearlever.

The Fiesta’s natural poise shines through when you find some corners and starts to counteract the lethargic engine. The Active turns in assertively with degree of body roll, but nothing extreme. The steering is direct, clear and its speed is well-judged when compared with the way the chassis responds. Only if there’s a mid-corner bump does the Active’s control start to crumble; with the chassis loaded, an extra jolt makes it quiver unnervingly. 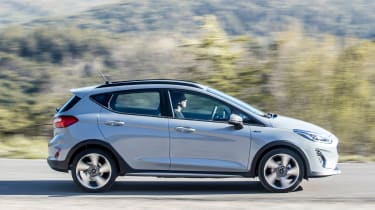 There’s always a slight delay from the engine when asked to deliver its performance on the exit of a corner. However, the Active’s agility into a corner means you can jump on the throttle so early that the engine has fully woken up just as the corner unfolds.

It’s easy to develop a flow in the Active, even down an unknown road. It might not be a challenging, white-knuckle thrill ride, but there’s a satisfaction in tying together a series of bends, not wasting any forward momentum, and being crisp, clear and well-timed with your inputs.

The Active’s new, more rugged chassis set-up doesn’t grant the Fiesta any more character or give a driver anything more to play with. But despite the softer springs and raised body it doesn’t take away much of what makes the Fiesta a joy to drive.

There’s a plethora of rivals to the Fiesta Active, so we’ll stick with just a few of the highlights. 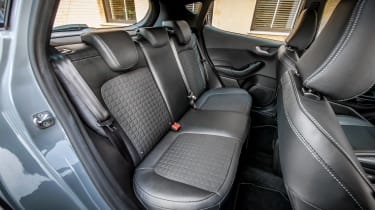 The Nissan Juke and the Renault Captur are similar underneath, but it’s the Japanese version that feels the most up-to-date. The Juke also comes in sporty Nismo RS guise.

Citroen’s C3 Aircross takes the robust styling a step further than any of its rivals, with chunky plastic moulding down the doors as well as the obligatory arches. If value is your biggest concern, then the Hyundai Kona is worth looking into, as it starts from £16,450.

Perhaps the Active’s biggest rival, however, is the regular five-door Fiesta. It’s cheaper, just a practical and even better to drive than the Active and any of its rivals. What’s more, you can get an ST – a proper hot hatch – for the price of the Active we tested.