Hyundai Tucson review - can it entertain like a Skoda Yeti?

Hyundai's latest compact crossover is a fine car, but won't offer the fun of a Skoda Yeti on twisting roads 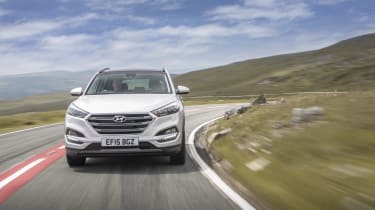 Hyundai’s latest entrant into the crossover market, and the resurrection of the Tucson name – the previous car was dubbed ix35.

While not an evo car on the surface, Skoda’s Yeti showed us that you need not sacrifice polished driving dynamics and or even fun once you’ve resigned yourself to a practical family wagon, and the reduced weight of cars in this class, thanks to high-strength steels and downsized, turbocharged powerplants, opens up greater potential for driving involvement.

Hyundai has expanded the choice of engines for this generation, offering naturally-aspirated and turbocharged 1.6-litre petrols, and a choice of 1.7-litre and 2.0-litre diesels.

It produces 175bhp, and has a 195lb ft torque spread between 1500-4500rpm, with either a six-speed manual or seven-speed dual-clutch transmission available. Both come with standard all-wheel drive. The DCT shaves four tenths from the manual’s 9.5sec 0-62mph run, and goes half a mile further on every gallon of fuel, at 37.7mpg combined.

The diesels are the more frugal – the 1.7 achieves 61.7mpg combined with the lowest CO2 at 119gkm. The 2.0 manages up to 58.9mpg in manual, two-wheel drive form. It produces 134bhp in standard form, but a 182bhp version (with 295lb ft of torque) is also available, with a six-speed manual or six-speed torque converter automatic. The latter reaches 62mph in 9.5sec and turns in a 43.5mpg average fuel consumption figure. 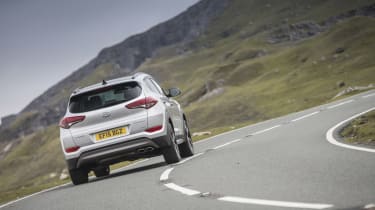 Hyundai tested the new Tucson on European roads, to closer align the car’s ride and handling characteristics to the tastes of European buyers. In addition to temperature testing, engineers assessed the car at high speed and even on the Nurburgring – clearly not exclusive to high-performance cars and hot hatchbacks.

The electrically-assisted steering box is now mounted on the rack, rather than the column, in the pursuit of better feel. Spring and damper rates have been tuned not just for better ride and handling, but lower NVH, which is also assisted by greatly increased use of high-strength steels in the bodyshell.

Better with the newly-introduced turbocharged petrol we tried, than with the 1.7 CRDi diesel Hyundai expects to be its biggest-seller. Where the diesel never quite motivates the car to pulse-raising pace, the petrol has all the appealing smoothness, keen mid-range and responsiveness we’ve come to expect from this generation of engines.

Provided you leave the optional dual-clutch transmission in Sport mode, at any rate. Early gearchanges in the normal mode, designed to fox official fuel economy tests, result in lethargic response and subdued progress. In Sport, the gearbox typically holds you in a lower gear, raising revs to the torque peak and punching harder away from lights or out of corners.

Sadly, the Tucson falls short of Yeti-style dynamics, but you can at least make flowing progress thanks to a supple ride and direct steering. There’s only a hint of feel through the rim despite the revised assistance setup, and we’d like a bit more weight too – load doesn’t really build through corners, which can be disconcerting as you up the pace.

It’s hard to criticise the car for this given its intended market, and the light, easy clutch and gearlever in the manual-equipped diesel is equally appropriate for the car’s target audience. It’s just a shame the dynamic quality found in premium crossovers hasn’t yet permeated their equivalents in the value sector. 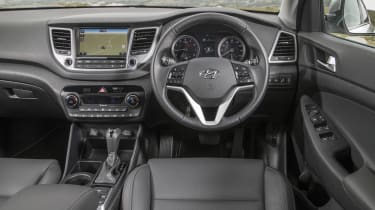 Closest in many respects is the Sportage, from Hyundai’s subsidiary Kia. There’s a new model on the way offering the same features as the Hyundai, and Kia’s 7-year warranty make it an appealing prospect to those prioritising value. For absolute value, the Dacia Duster is worth a look – though it’s an agricultural beast by the standards of modern crossovers.

And then there’s the Skoda Yeti. We were so impressed by Skoda’s crossover we once ran one in the evo Fast Fleet, and it remains one of the best options for buyers looking to mix practicality, value and fun in a family vehicle. The chunky styling has aged well, too.