Mercedes has made the new ML faster and greener than the old version, we put the 41mpg ML 350 CDI diesel through its paces 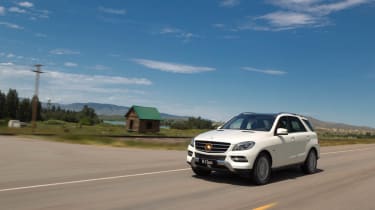 The third generation of Mercedes’ large SUV, which is an all-new car despite its familiar looks. Highlights include more power, better fuel economy and various driving aids aimed at making it handle better.

The M-Class sits on a new platform that will also underpin the next-generation GL. It features double wishbones and standard ‘Airmatic’ air suspension with Comfort and Sport modes. Merc will also offer the option of a clever system called ‘Active Curve Control’ which uses anti-roll bars that decouple when not cornering, allowing for decent body control in the twisties but extra compliance on straights.

In the unlikely event that you’re looking to buy a lifestyle SUV for actual off-road use, the ML comes with an optional pack that includes six-setting stability control, lockable diffs and hill descent control.

Hushed. We tried the 255bhp 3.5-litre V6 diesel-engined ML350 CDI – set to be the best-seller – which stayed impressively muted in the cabin, even under hard acceleration. The new ML350 has an extra 27bhp and 59lb ft over the outgoing model – the torque peak is now a towering 457lb ft. All that twist makes the ML impressively rapid, despite a 2100kg kerbweight. 0-62mph takes 7.5 seconds and – thanks to the 7G ‘Tronic Plus’ seven-speed auto – it’s never short of overtaking urge.

The official economy figure is impressive, too, the ML350 CDI scoring 41.5mpg compared to the old car’s 32.5mpg. CO2 emissions of 179g/km are also very respectable for something this size and shape. Eco measures include a subtle start-stop system you barely notice in operation.

And what of this ‘Active Curve Control’? The ML never feels less than its size, but it stays composed in corners and has more grip than you would expect. The system definitely improves responses in the cars it’s fitted to. Praise must also go to the electric power steering system – it may not be very communicative, but it’s precise, accurate and well-weighted.

It’s horses for courses. If you want an agile and involving large SUV, then you’re likely to still be drawn to the BMW X5 and Porsche Cayenne. But the ML is a strong all-rounder, offering a rapid, comfortable driving experience and shading its older rivals on quality, too.

Prices haven’t been relased yet, but you can expect the ML350 CDI to kick off at around £45,000, which is competitive for the class.

Excitement comes later in the form of the new ML63 AMG, which will use the same all-new 5.5-litre twin-turbocharged V8 as the recently launched E63 AMG. An entry-level 2.1-litre four-cylinder diesel with 204bhp is also set to join the line-up, and Mercedes has confirmed a hybrid version will follow later.