A last hurrah for the 996 it may be, but with even more power it's far from over the hill 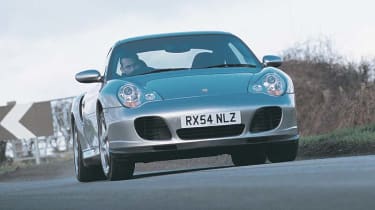 You might wonder quite what would possess somebody to walk into a Porsche showroom, casually ignore the all-singing PASM-equipped new 997 Carrera S and instead write out a cheque for £99,300 for an apparently obsolete Porsche 996. Seems a bit illogical, doesn't it? Then again, 'obsolete' is a subjective term when you're talking about a four-wheel- drive, twin-turbocharged supercar capable of serving up almost surreal all-weather speed. And while the Turbo in 997 form is still many months away, the Turbo S proves emphatically that there's life in the 996 yet. The figures speak for themselves. The S is essentially a Turbo (420bhp) with the X50 power pack, which includes bigger turbos, modified intercoolers and a revised ECU; all of which takes power up to 450bhp at 5700rpm and bolsters torque to 457lb ft at 3500rpm (the standard turbo has a piffling 413lb ft). Porsche claims the S gets from 0-60mph in 4.2 seconds and nips past the ton in 9 seconds flat. Keep the throttle pinned and 191mph isn't too far away... Fortunately the Turbo S also comes with Porsche's fabulous (and fabulously expensive) PCCB ceramic composite brakes as standard, so should you be trying to verify that top speed you've got the security of seriously powerful and virtually fade-proof brakes. As a bonus they're also 50 per cent lighter, cutting unsprung weight, which in turn improves ride quality. A similarly specified Turbo would cost £104,424 (£90,360 for the basic car plus £5355 for the brakes and £8709 for the power upgrade) and have none of the cachet of the Turbo S badging, or status as the last hurrah of one of the most accomplished road cars ever produced. Incidentally, you can also order a Turbo S convertible (£105,030) and both the coupe and soft option are available with the other soft option, an automatic gearbox. Still, the S does suddenly feel a little old-fashioned if you've been exposed to the 997. Not in a creaky, nasty sense - but it's just a bit less polished in here. Having said that, the interior also feels more special, more focussed than the slightly generic-luxury-car aura of the 997, cheaper plastics or not. Some things, of course, are timeless, and when you find a clear stretch of road and get to wring the S through second, third and into fourth you're left queasy by the 911's pace. It really is uncomfortably quick. It kicks a bit later than a standard Turbo thanks to the bigger blowers, but from just over 3000rpm the 3.6-litre twin-turbo flat-six is squeezing you hard against the seat. Add another 1500rpm and your head feels like it weighs about ten stone and your neck has its work cut out to stop it banging against the head restraint. More impressive still is that the S doesn't lose even a scrap of accelerative force to wheelspin; it simply hunkers down and rips angrily into the tarmac, shrink-wrapping distances in the process. There's wonderful steering feel, too, and despite the four-wheel drive and wide body it still manages to feel delicate and wieldy. You get a wonderfully lucid picture of the rear engine working for you through a corner and with time you can maximise the advantages that the unique layout offers. Even less confident drivers will appreciate the way the car interacts and adjusts its balance with every input. We're talking about precise, subtle shifts in weight, however, rather than grand gestures. The S, like any 911 and particularly the Turbo, is not a car you slide around on the road with any regularity. Not unless your name's Walter R�hrl, anyway. You simply drive within its massive limits and enjoy the sensations through steering and seat. Push beyond the tyres' ultimate grip and you'll find gentle understeer, which is easily negated with a lift. Stay committed and you can even provoke a progressive slide from the rear under full power. This is big-balls stuff, though, and the consequences of letting the S get away from you don't bear thinking about. It's only with the benefit of driving the new 997 that you can see areas where the Turbo S could be improved. The gearshift feels a bit over-damped and fragile compared with the new model's shorter and more mechanical- feeling throw, the pedals are slightly offset to the left and the 996 feels slightly less in control of its mass. You particularly notice this when braking on a very bumpy road. Where the 997 would remain perfectly stable, the S triggers its ABS as the front wheels hop and skip over the surface. Ultimately, the Turbo S looks expensive next to the more precise 997 Carrera or Carrera S. But, for some people, until you can buy a 997 with that legendary Turbo script across its rump, the new car will hold little interest. For them the mighty Turbo S is still the best fairground ride that £100,000 can buy.