The four-wheel-drive 911 is back and it's as brilliant as ever, but is it worth £5K more than a 2wd Carrera? 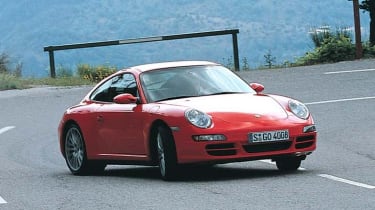 Porsche's new Carrera 4S is brilliant. Sorry to spoil the surprise - if indeed you think Porsche building another life-affirming 911 is a surprise - but it's as simple and as black-and-white as that. The marriage of the indomitable 350bhp, 3.8-litre flat-six Carrera S engine and an updated version of the light and heavily rear-biased all-wheel-drive system from the previous-generation 996 C4S creates a car of spectacular composure and devastating point-to-point speed. By any standards the 997 C4S is a special car. It needs to be. At £69,900 it's £5000 more than its rear-drive sibling, the outrageously competent Carrera S. But although the S lacks the assistance of driven front wheels, it is blessed with Porsche's incredibly effective PSM stability system and enough mechanical grip to rip ruts into dry tarmac: the C4S has its work cut out to make sense in any market that doesn't have snow for six months of the year. Aesthetically the C4S certainly talks-the-talk with a confident, muscular flare of its rear wheelarches. It's 44mm wider across its hips than the rear-drive models (as is the £62,930, 321bhp C4) and in combination with the 997's retro headlights and silhouette the C4S looks even more like a classic 911 road-racer. In fact, the C4S is even wider than the 996 Turbo and the next Turbo will borrow this deliciously swoopy metalwork. So, that's an extra 44mm of voluptuous sheet metal for your money. And, of course, that clever viscous multiple-plate coupling four-wheel-drive system. Under normal circumstances the C4S channels just 5 per cent of its power to the front wheels, but this can rise to as much as 40 per cent when the rear wheels start to slip and the electronics go on the hunt for traction. In theory this should allow the C4S to retain the nimble drive into the corner of the rear-drive coupe (not to mention the unburdened steering feel) and build on the 997's already formidable traction and control on the way out. The system adds just 55kg in weight. As is usually the way with Porsche, if it looks like it will stack up on paper then the engineers will have striven to make the reality even more impressive. And it is. The C4S, like the standard Carrera S, is a car that manages to feel desperately dependent on your input and keen to engage you on every level and yet it's completely trustworthy should you misread the high-definition information being filtered through steering and seat. The PASM suspension smothers nasty roads with disdain, but hit the Sport button and the C4S suddenly gets a real edge; think GT3 that's been to finishing school. That unique rear-engine feel is retained and although the steering has gained weight and lost a degree or two of feel, the C4S is still a precision tool. It rewards commitment and smoothness with its tight gearshift, perfectly placed pedals, fearsome body control and eye-popping stoppers (ceramic discs are a £5349 option, but we suspect you'd rarely notice the benefits). Mechanical grip is phenomenal and, although that howling flat-six has enough grunt to unstick the rear tyres out of very tight turns, it's rare that the PSM system even registers an interest in your efforts. Switch it off, carry in that bit more speed, drive through the mild understeer and eventually you might get the C4S to take some attitude, but almost before you've wound on the opposite lock the front wheels get a slug of power and pull it straight. On the right road it's devastating, and in the wet it should be sensational. Some will suggest that it's too good, too unflappable, and if you get your thrills from easily achieved oversteer the C4S certainly isn't the right car for you. But when you're on a charge, and despite the unfazable poise of the C4S, you feel intimately involved. There's still a tangible sense that you, the driver, are the key ingredient in the mix, working the chassis to its limits, dictating the car's attitude and meticulously balancing power with grip. And you still get that gentle corkscrewing as the huge 305/30 ZR19 rear rubber digs in under the weight and torque of the creamy engine and the steering goes light in your hands. PASM's infinitely adjustable damping has done little to dull the 911's unique character. And should you have the opportunity to drive over and above the limits of the tyres and drivetrain, the C4S remains a beautifully resolved, predictable handler. The laws of physics are obviously no match for Porsche's engineering know-how. It's a winner, then? Well, yes and no. The C4S is an awesomely accomplished device (the first four-wheel-drive 911 to be quicker around the 'Ring - by two seconds - than its rear-drive equivalent), but the standard 997 is so good that I can't quite see the real-world advantage of the C4S. I love it, but I'd get just as much joy from the Carrera S. And, with a 911, that's all that counts.