Glass-roofed 911 should be the best of all worlds 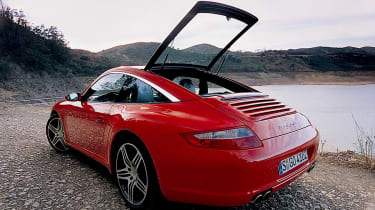 Coupe and Cabriolet rolled into one. That’s what the 911 Targa seems to offer, and there’s no doubt that for some it’s the perfect 911. For the latest version, Porsche has decided to make it exclusively all-wheel drive, whether it’s the regular 321bhp model or the 350bhp S. It also has the Turbo’s wide-body, wide-track stance and its more sophisticated, more responsive transmission, which apportions between 5 and 40 per cent of power to the front wheels.

The see-through roof now has thinner glass but the car still weighs 60kg more than the 4S coupe, and most of it is sat up high. Body-strengthening includes a steel hoop inside the screen surround and tubes extending the length of the roof. Press the button on the centre console lightly and the gauze sunblind retracts, press it fully and – at any speed – the large centre glass panel drops an inch and reverses until it is sitting beneath the rear screen.

It’s pleasant enough with the sun streaming in, and buffeting is notable by its absence, the air inside the cabin remarkably still at 100mph. However, our example was beset by a number of very minor but irritating twitters that may have been down to structural flex. Also, with the roof closed there was appreciable wind noise.

The 4wd Targa isn’t the solidly planted, neutral-handling 911 you might expect. Being less structurally stiff than the coupe, it has commensurately softer springs but to counteract the greater mass it carries higher up it is equipped with beefier anti-roll bars. Consequently, while its rear seems to resist squat quite firmly, the nose bobs over crests and dips and it exhibits that mild, corner-to-corner corkscrewing motion through undulating curves that has long-defined the rear-engined Porsche. You can also find yourself winding on opposite lock out of the tighter corners, the slide and recovery clean if you ride it out on a steady throttle. Press the Sport button and the damping and throttle response are sharpened noticeably.

It’s entertaining, the Targa, but it doesn’t offer the refinement or dynamic poise of the Carrera, nor the exhilarating fresh-air sensations of the Cabriolet. It also costs £5400 more than the equivalent coupe. UK sales of the 996 Targa amounted to a couple of hundred in five years. I can’t see that number rising significantly.