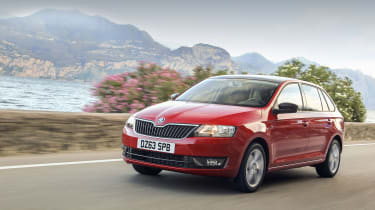 The black sheep of the Skoda family. The Rapid Spaceback exists in a strange limbo between the similarly-styled and slightly cheaper Fabia, and the bigger-booted Rapid – which itself looks like a shrunken Octavia.

A 1.2-litre, turbocharged four-cylinder is the peppiest engine you’ll find in a Spaceback if you want a manual gearbox – the available 120bhp 1.4-litre TSI is DSG-only.

Available in 85bhp and 104bhp variants, we tried the more powerful of the pair. Maximum torque of 129lb ft is developed from 1550-4100rpm. It also gets a six-speed manual gearbox to the slower car’s five-speed unit, making better use of the torque spread, and just falls short of a single-figure 0-62mph sprint with a 10.2-second time. Top speed is a respectable 120mph

While the latest Fabia sits on a platform of updated Polo and MQB parts, the Spaceback makes do with a revision of that Polo platform alone.

That’s hardly a crutch on which the Spaceback has to lean, and the car’s pared-back nature means it’s commendably light – at 1095kg in 1.2 TSI manual trim, it’s only 41kg heavier than the equivalent Fabia, despite being 312mm longer and a touch wider than the supermini.

Suspension is by MacPherson struts at the front and torsion beam at the rear – and unlike the Fabia, there’s no lowered ‘sport’ suspension option. 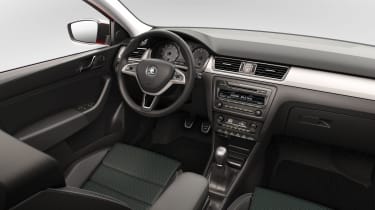 Surprisingly, better than the newer Fabia. Most of that is down to the steering, which has some of the feedback not present in the smaller car. It’s hardly teeming with feel, but there’s enough to telegraph some information from the tyres and the drive is more satisfying as a result.

There’s not much outright grip on the 16in wheels and 215-section tyres, but the chassis balance is safe enough that the inevitable understeer can be quelled with a quick lift. The car always feels on its tip-toes and the relatively soft suspension takes just a moment to settle in corners, but the pliancy is welcome on poor surfaces.

The engine is a highlight of the package. Paired to a sweet-shifting transmission, the TSI’s low-down torque makes the car feel punchy from low revs. Long gearing removes some excitement from a straight-line dash, but the four-pot spins smoothly and there’s even gruff, sporty tone to the exhaust under heavier throttle applications.

Credit should also go to the excellent driving position. The cabin itself is unexciting, but it’s possible to sit relatively low with the wheel suitably close. The simple, glassy cabin pays dividends in terms of visibility too.

In terms of interior volume, the Rapid Spaceback matches, and even eclipses most cars in the Focus and Golf class, but pricing is closer to Skoda’s smaller Fabia and its rivals.

It doesn’t have the fun factor of an equivalently-priced Fiesta, and can’t match a cars in the class above for performance, equipment and sophistication, but for a small subset of buyers who need supermini running costs and family car space, the Spaceback is ideal. That they’ll also find a neat chassis and willing engine is just a bonus.