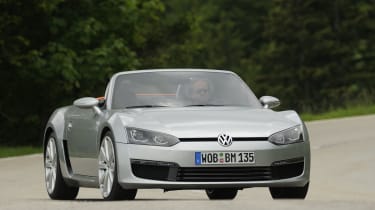 Expecting to glean anything meaningful from driving a one-off concept car is usually no more sensible than trying to have a conversation with a shop window dummy. The stylised, too-perfect-by-half appearance isn’t fooling anyone and the limited range of movement, while fine for striking a pose, is pretty hopeless when it comes to conveying the nuances of body language, never mind even the most rudimentary raised eyebrow. I remember sampling the Merc SLR concept in Lanzarote back in 2000. The thing felt so inert it might as well have been made from the same stuff as the surrounding lava slopes, and it delivered a driving experience about as far removed from the eventual production car’s as the top speed of a Smart is from the sound barrier. If you want a powerful example of a pointless exercise, drive a concept car.

But not, maybe, the VW BlueSport. This is the car that stole the show at Detroit in January as a static exhibit. Built on an all-new mid-engined platform, it’s a subtle stunner in the grand tradition of tempting concepts: chunkily handsome, cute but steely, brimming with funky details, designed to stoke the fires of desire. And while its future in the real world has yet to be given the green light – though it’s hard to see how a Lotus Elise S-priced turbodiesel mid-engined roadster with Porsche Boxster-aping design values can be denied – this one and only BlueSport looks good to go. So good, in fact, that it’s here, parked in a siding halfway up an insanely twisty mountain pass in the Bavarian Alps near the Austrian border. Not the usual lap of the car park, then.

The timing carries a certain back-to-the-future intrigue, too, given the current power struggle between VW and Porsche that now looks likely to end in a merger giving VW overall control. From a historical perspective BlueSport would be the spiritual successor to the 914, the classic mid-engined roadster developed by Volkswagen in the late 1960s but only ever sold as a Porsche. That isn’t on the cards this time, though.

At the moment, and with due emphasis given to its name (in VW-speak ‘blue’ equals ‘green’), the BlueSport runs VW’s familiar 2-litre four-cylinder common-rail turbodiesel – with the boost tweaked to give 178 rather than the usual 168bhp, and supported by 258lb ft from 1750rpm – driving the rear wheels via a six-speed double-clutch DSG transmission. With a projected 6.6sec 0-62mph time and 140mph top speed but almost 50mpg and 113g/km CO2 emissions, its ‘green sports car’ credentials are impressive. But the 261bhp turbocharged 2-litre four-cylinder direct-injection petrol engine from the recently announced Scirocco R apparently slots just as snugly behind the seats and, with a resulting power/weight ratio of around 220bhp/ton, would make a true, cold-eyed Boxster rival.

In the interests of cost savings and keeping the notional entry-level price pegged to around £25,000, but also a factor in how quickly the BlueSport could be put into production, the chassis hardware represents something of a pre-emptive raid on the future VW parts bin, teaming the front MacPherson strut set-up from the yet-to-be-seen fifth-generation Polo with the rear multi-link arrangement from upcoming ‘4Motion’ four-wheel-drive versions of the mk6 Golf. Also borrowed from the Polo is the electro-mechanical steering while the brakes are lifted from the Golf R32. The low stance is accentuated by the way the extremely pretty 19in alloys – shod with 235/35 (front) and 245/35 (rear) Pirelli P Zero Nero tyres – sit deep in the broad swell of the wheelarches.

All right, one small drawback. This being the only BlueSport in existence and therefore worth comfortably in excess of 1 million euros, it’s electronically limited to 62mph. The wisdom of this isn’t slow to sink in. The BlueSport looks so right and feels so well sorted within a few hundred metres of rolling down the road, the invitation to explore the limits of its chassis with all the firepower it can muster couldn’t be much bigger if it was written in the sky with red smoke. Once you’ve started it, that is. This is more concept-y. No key, just a large starter button in the centre of the Jaguar XF-like rotary transmission selector – in this case a knurled plastic bezel with the usual PRND detents. Jab it once and the electricals go through their checks while the speedo and rev counter needles perform full arc run-throughs. Then hold the button down for two seconds and the engine starts. Not the most inspiring of sounds, and no-one’s going to mistake it for a quad-cam V6, but it’s quiet enough.

Great seats, terrific driving position, fine visibility, clear instruments, chunky controls, even a Sport button for a livelier interaction between engine and transmission. It isn’t fibbing, either – the BlueSport sprints forward with torquey slugs of not-too-rattly acceleration and runs into its speed ceiling with disappointing alacrity. It must be as light as VW claims.

Sixty-two is just fast enough to put some heat on the chassis along this kite ribbon of a road, though, and here the news is better still. I can only assume that chassis tuning hasn’t begun in earnest yet but, to be honest, if I were in charge of the project, I’d be scratching my head. The BlueSport’s steering might not be the last word in tactility and detail feedback but it’s beautifully direct and sets up a feeling of precision, agility and neutrality that underpins the car’s dynamic demeanour.

Like all the best mid-engined cars, it has a lightness of touch that allows it to flow over varying road surfaces and camber changes with the minimum of disturbance. Don’t expect much in the way of any time/anywhere MX-5- style tail sliding, though – at least not with the oil burner in situ. The BlueSport has far too much mechanical grip for that, in the dry anyway. Which isn’t to say it’s no fun. Rather like the Boxster, it majors on speed and finesse. And those R32 stoppers hardly break sweat.

An all too brief drive in what could be a very exciting addition to the roadster ranks ends with a quick demonstration of the single-layer hood. That’s quick, too: manual maybe, but the work of seconds from folded to taut and trim. Like everything else about the BlueSport, it works. I’m sure VW knows what to do next.