The revised BMW 7-series gets more economical engines and extra kit, but it's still not a car to appeal to enthusiastic drivers 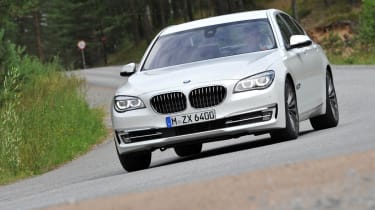 The BMW 750i is the facelifted version of the BMW 7-series, a car that seems pretty invisible in the UK but which is actually the most popular 7 ever globally, over 200,000 have been sold so far, largely on the back of demand from Russia and China.

You won’t be surprised to hear that BMW claims some dramatic improvement for the 7-series’s economy thanks to revised engine tuning – it’s claimed to be up use 25 percent less fuel than the outgoing model. The global engine range extends from the base 258bhp 730i all the way to the monstrous 544bhp 760i, powered by a twin-turbocharged V12. Diesel versions range from the basic 730d with 258bhp all the way to the new 750d xDrive, with 381bhp and standard four-wheel drive. All versions now have an eight-speed automatic gearbox.

Visual changes are limited to optional LED headlamps, a tweaked kidney grille that’s more upright, and even uglier than that of the previous 7.

Impressively refined – but depressingly dull. BMW claims that the suspension has been tweaked for better bump control, but it still seems to struggle when asked to smother potholes and to keep sharp ridges from disturbing the cabin. The steering is merely a positional device that does nothing to inform you of what’s going on at the point of contact with the road.

The result is a car that you never feel like hustling along, despite impressive performance. BMW claims a 4.8-second 0-62mph time for the twin-turbo V8 in the 750i that we tested, and that certainly feels right from the driver’s seat. It’s not lacking in performance, but it is lacking in the sort of emotional appeal that used to make previous versions of the 7-series such interesting cars for those who wanted to drive themselves. After a day spent piloting the new 7 it’s hard not to conclude that this is a limousine that needs a chauffeur.

With the minimal sales of big petrol saloons in the UK, the 750i that we drove is unlikely to find itself compared with much else – Audi no longer offers a comparable petrol A8 and both the Mercedes S500 and Jaguar XJ Supersports sell in tiny numbers.

The diesel versions will be more relevant when they reach the UK, but almost certainly no more fun.

For the particularly paranoid there’s a ‘high security’ 760i which features armour plating and weighs 4.2 tonnes, yet can still accelerate from 0-62mph in just 6.2-secs. At €350,000 before taxes it’s the most expensive car that BMW currently sells.