With an all-new body inspired by a jet fighter, the LP640-based Reventón is Lamborghini’s most extreme – and expensive – supercar ever 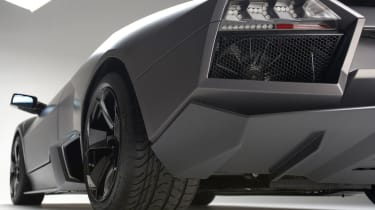 How do you turn a Lamborghini Murciélago LP640 into something more extreme? The temptingly glib answer is you can’t. Or possibly a counter-question: why would you want to? After all, you might think, the Murciélago wrote the book on ‘extreme’. It has one of the most dramatic shapes in supercar history. And, ramming home the point, it’s a well- known fact that old women and children still hobble/run away or faint when they see one coming towards them.

But is the Murciélago really that extreme, or is it just stunningly beautiful? I’d go with the latter. Yes, it has presence. And yes, its size and shape generate plenty of drama, but it’s actually a remarkably restrained piece of work, unsullied by any stick-on bits that might be calculated to top up its already ample testosterone levels.

You might remember that, many years ago, the same ‘clean ‘n’ simple’ descriptions were applied to the original Countach and Diablo. But there’s a grand tradition at Lamborghini – and one that owner Audi is clearly keen to keep alive – that once a design reaches a certain age, its aesthetic envelope gets pushed. Hard. But never quite this hard.

Called the Reventón, this new variation on the Murciélago takes its name, in the Lamborghini tradition, from a fighting bull (and one with a reputation, having killed the famed Mexican bullfighter Felix Guzman in 1943). It is being billed as the company’s most expensive and extreme supercar ever, and for the 20 ‘friends and collectors’ who’ve placed deposits on the entire limited production run, life with a Murciélago will never be the same again.

Or maybe it will. According to Manfred Fitzgerald, marketing manager at Lamborghini for the past nine years, now head of design, and the man directly responsible for the million-euro (plus taxes) Reventón, the decision to makeover a Murciélago was entirely design-led. So despite the identical price, it’s not a Veyron chaser. It hasn’t been made to set a new land speed record either, and it won’t accelerate any quicker than the standard LP640 or go round corners any faster.

Not intentionally, anyway, though the liberal use of carbonfibre composites and the fact that each one of the 6.5-litre V12 engines will be blueprinted (liberating a minimum 10 extra bhp, bringing the total to a guaranteed 641bhp at 8000rpm) may exert subtle influences in these areas. Still, you could argue that the LP640 is fast enough already…

Tempting as it might be to dream, this most certainly isn’t the Murciélago equivalent of the Gallardo Superleggera. No, Lamborghini describes the Reventón as ‘haute couture’, ‘a symbol of extreme exclusivity’, which is refreshingly candid at least. A bigger clue to the thinking behind it is given by Stephan Winkelmann, Lamborghini’s chairman and CEO, who explains, ‘Our designers at the Lamborghini Style Centre based in Sant’Agata took the technical base of the Murciélago LP640 and compressed and intensified its DNA, its genetic code.’

But only after a trip to the local American airbase to introduce a degree of stealth fighter loading to their collective inspiration. The dispenser of shock and awe that really caught their eye, relates Fitzgerald, was the F-22 Raptor, with its simple, angular shape, sharp edges and distinctive nose-forward canopy.

Exported to the four-wheeled realm, this translates into a more technical and edgy-looking Murciélago with interrupted lines and contorted surfaces to create a more dynamic play of light across its surfaces. The aerospace overtones account for the paint finish as well; also called Reventón, the new hue is described as a mid-opaque green/grey ‘without the usual shine’. Very Top Gun.

As with the LP640, the Reventón’s exterior is carbonfibre, glued and riveted to a carbon and steel structure. The overall dimensions and proportions remain similar to the Murciélago’s but, panel for panel, the bodywork is all new.

The heavily revised, pointed nose section features gaping jet-fighter-like ducts that cool the carbon brake discs and six-pot callipers. Further back, the doors still scissor upwards, just as on the regular Murciélago (and the Diablo and Countach before that), but the sill spoilers beneath them are functionally asymmetric – the one on the driver’s side is larger to allow an increased flow of air to the radiator; on the other side the spoiler is flat as it only has to contain the airflow below the floor.

The downforce-generating flat underbody now terminates with a highly visible rear diffuser, which, along with the adjustable rear wing, enhances stability when approaching the car’s claimed top speed of ‘over 340kph’ – that’s 211mph, unchanged from the LP640.

The airflow and section of the variable-geometry air intakes for the engine have also been modified, while the engine cover is made of glass laminate (with open ventilation slits) – all the better to show off the V12 beneath. And for lovers of tactile petrol caps, the Reventón’s is nothing short of a work of art, being milled from a solid aluminium block.

Perhaps unsurprisingly, the lighting jewellery seen on the latest Audis gets an outing here, too, with the restyled bi-xenon headlight units gaining sparkling LED daytime running lights and indicators. There are LEDs at the back for the tail-lights, brake lights and indicators, too, arranged in three arrowhead shapes to mimic the theme seen throughout the rest of the new design. Being located near the exhaust and just above the engine cooling ducts, these particular LEDs have been specially developed to be heatproof.

Completing the external makeover is a striking new wheel design that sees a carbonfibre fin screwed to each aluminium spoke. The fins aren’t there just for show, either, they’re there to create a turbine effect to further aid the cooling of the massive 380mm brake discs.

Inside, Lamborghini’s favoured blend of Alcantara, carbon, aluminium and leather is stunningly resolved and, massaging the cutting-edge strike-fighter theme, the dash has no dials, only three TFT liquid crystal displays set in a housing milled from solid aluminium billet and shrouded in a carbonfibre casing. The driver can choose from three vehicle information settings and, at the press of a button, switch from a digital to a quasi-analogical display with classic circular instruments. There’s even a g-force meter that represents dynamic driving forces by the movement of a sphere on a 3D grid, depending on the direction and intensity of the acceleration. An instrument along the same lines can be found in high-performance aeroplanes, and Formula 1 teams also use a similar device to analyse dynamic forces.

At over a million euros, it would be hard to say who might be tempted to buy the Reventón – if they hadn’t already all been sold. As ever, ‘extreme exclusivity’ is a sought-after commodity. It’s something of a collectors’ item. But you’ll be glad to hear that orders have been spread fairly evenly around the globe, with only a slight clumping in the USA. One is even destined for the UK. A very rare Lambo indeed.