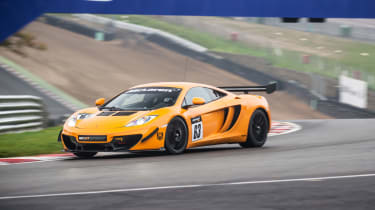 McLaren’s 12C GT Sprint. A track-only special, which slots neatly between the 12C coupe and the full-blown GT3. Though it doesn’t have its own high-profile one-make series, the Sprint is McLaren’s answer to the Porsche 911 GT3 Cup and Ferrari 458 Challenge.

To ensure existing 12C owners feel in familiar surroundings – and to keep costs under control – the 12C Sprint retains much of the hardware and many of the electronic systems found in the road car. That means aside from beefed-up oil and cooling systems, the 3.8-litre 616bhp bi-turbo V8 remains unchanged, as does the seven-speed twin-clutch gearbox. Even the ProActive Chassis Control (PCC) system stays, although the switchable suspension settings have been ramped up, so that Normal in the Sprint is the equivalent of Race in the regular road car.

The brakes are new, with race-spec cast-iron discs. Brake Steer is retained, as is a recalibrated stability control that is adjusted via the PCC switches, just like on the road car. Our test car also features the full optional aero kit comprising a carbonfibre front splitter and a sizeable fixed rear wing. This negates the need for the stability-enhancing active McLaren Airbrake, which is shared with the road car and appears on the Sprint in basic specification.

The 12C has a distinctive, hard-edged exhaust note, and even with the muffling effects of a crash helmet the Sprint sounds like it means business. Dab the brake, pull back on the right-hand paddle (or push on the left, if you’re a seasoned 12C hand) and we’re away with no more fuss or drama than in the road car.

The first few laps are pretty edgy while the Pirelli wets get some heat and I try to dial myself in to the Sprint’s responses. As predicted, it’s faithful to the road car, except the race tyres pluck much more grip from the horribly slippery tarmac.

As confidence builds, you can feel the Sprint begin to slither, but milliseconds before your butt cheeks make a pre-emptive clench, the electronics gather things up. It’s an initially spooky sensation, but such is the speed with which you learn to trust in McLaren’s suite of driver aids that you can forget about managing the throttle from apex to exit, instead focusing all your attention on spotting your braking point and gauging your turn-in speed so that it precisely matches the grip available.

The same is true in the more aggressive PCC modes. You instantly feel the additional support from the stiffer suspension, and you also notice the electronics allow some slip angle before intervening. The subtlety remains, though, and with practice you can balance the Sprint at an optimal angle of slip, but while maintaining good forward momentum.

In terms of outright pace, McLaren is characteristically cagey, but chief test driver Chris Goodwin is quick to say they benchmarked the obvious rivals – that’s to say the Ferrari 458 Challenge and Porsche 911 GT3 Cup racers – and that the Sprint more than held its own.

As next steps go, the Sprint is a pretty big one for McLaren customers who have until now satisfied themselves with the odd trackday in their road car, but the uplift in performance and increased intensity make for a driving experience that’s on an altogether different level.

At just under £200,000 (plus local taxes), the financial commitment is pretty significant too, but there’s no question it’s an extremely well-judged machine in which an experienced driver of fast road cars could take their on-track skills to the next level, and then try their hand at competitive motor racing. Whether you use it as a super-serious trackday toy, or a stepping stone to racing a full-blown 12C GT3, if you have the means to buy it, the GT Sprint makes a compelling case for your £200k.